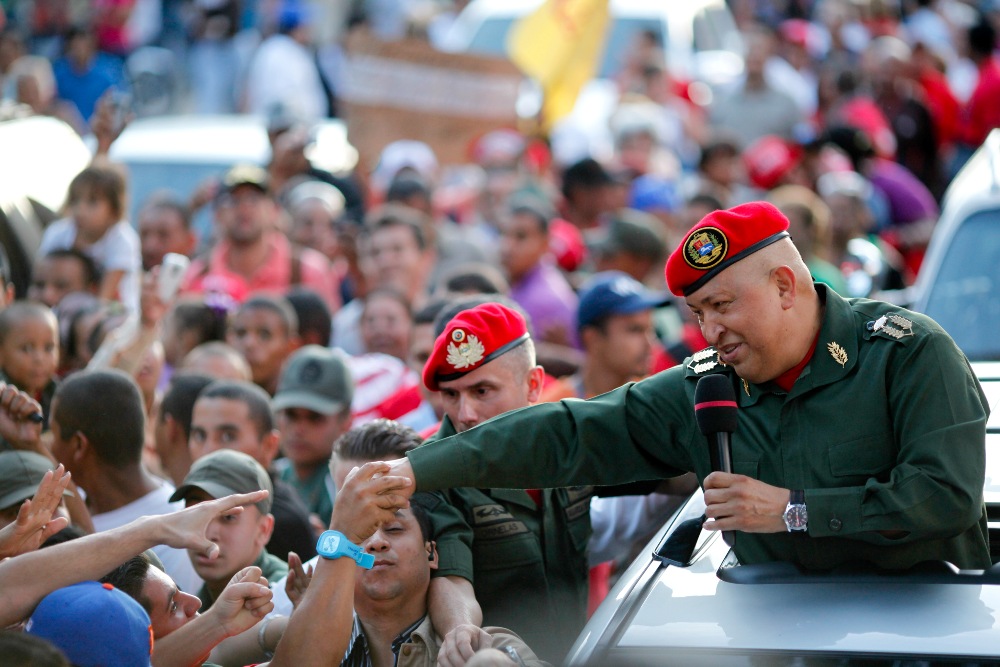 My visit to Venezuela at the end of June coincided with the speculation, rumours and finally announcements about the health of Hugo Chavez. This incident revealed a number of important questions about the Venezuelan revolution, the role that President Chavez plays in it and the character of the counter-revolutionary opposition.

To start with, the opposition tried to take advantage of Chavez’s unexplained stay in Cuba by demanding that vice-president Elias Jaua take over as president, and even moved a motion in the National Assembly to this effect. They clearly understand that if Chavez were removed it would be much easier to defeat the Bolivarian revolution. None of the other leading figures, ministers, governors, PSUV leaders, has anywhere near the same political and moral authority among the masses as Chavez has.

They cynically argued that there was a “vacuum of power” and that this had to be filled. This line of argumentation backfired as it reminded everyone of April 2002 when the oligarchy attempted to justify the coup against Chavez falsely arguing that he had “resigned”, thus leaving a “vacuum of power” which they simply proceeded to fill.

For many days nothing was known about the real reasons for Chavez’s absence from the country. He had left Venezuela on an official trip, travelling to several countries, and, after arriving in Cuba, he had simply not returned. One could feel the deep anxiety of the Bolivarian masses, particularly when faced with the growing campaign of insinuations and rumours being spread by the opposition.

The first news that was officially announced did not stop the rumour mill. Chavez had allegedly suffered from a “pelvic abscess” and had undergone surgical procedures in Cuba, it was said. Once again, the crass and disgusting behaviour of the opposition created a new backlash. The counter-revolution concocted all sorts of conspiracy theories. Some went as far as to say that Chavez was not really ill at all and that it was all a plot to help him regain popularity on the basis of sympathy.

When finally, on the last day of June, Chavez himself announced that he had cancer and had undergone two operations in Havana, the news shocked the whole country. The Bolivarian masses were stunned. Nobody knew how to react. A couple of incidents reflected the mood on the streets. In the Los Teques underground station someone dared make a cynical remark against Chavez aloud and was immediately surrounded by an angry crowd who were in no mood for jokes or attacks against their revolutionary leader. We met an experienced revolutionary militant who has been actively involved in the Bolivarian revolution and when we started commenting the news her voice trembled, she was nearly in tears.

Everyone was thinking about the implications of the announcement. Would Chavez be able to stand in the 2012 presidential elections? Who amongst the leaders of the revolution would be capable and able to replace him if he could not? Some of these worries were dispelled a few days later when Chavez returned to Venezuela on July 4th. In a show of the deep connection the Bolivarian masses have with him there was a spontaneous demonstration outside Miraflores Palace when it was announced that he was back and thousands were present when he gave a speech. The gathering had not been organised by anyone, it was another case of the revolutionary people of Caracas descending from the cerros and the barrios.

Clearly the Bolivarian masses have a very deep emotional relationship with Chavez which has been forged through many revolutionary battles. For them, Chavez is the person who represents the revolution, who has played a key role in the process of revolutionary awakening which the Venezuelan people have experienced over the last decade or more. He speaks the language of the people and lashes out against the oligarchy and imperialism.

But there is more. Over the last 12 years since he was elected, the revolutionary masses have also experienced how the state bureaucracy (both from the old state apparatus and the new “Bolivarian” upstarts) has become a brake on their own revolutionary initiative. There is a whole layer of managers, directors, regional governors, local mayors, ministers, etc., who are regarded by the masses as either incapable, inept, corrupt, only interested in their own personal advancement or openly counter-revolutionary. Many have already saltado la talanquera (jumped the fence) over to the counter-revolutionary camp (Miquilena, Baduel, PODEMOS, the PPT, the former governor of Aragua Didalco Bolivar, the former governor of Lara Henry Falcón, etc). Others remain within the Bolivarian camp but are clearly blocking the revolutionary advance of the masses. In the eyes of the masses there only remains Chavez himself as a genuine and honest leader of the revolution.

There is still a deep reservoir of support for Chavez as the leader of the Bolivarian revolution amongst the masses of the Venezuelan people. Throughout these developments the right-wing opposition also revealed their callousness and were caught completely off guard, reacting to events and also revealing their weaknesses.

What is clear is that Chavez’s ill health is one further complicating factor for the 2012 elections. For a number of years now, the number of votes for the Bolivarian revolution in different elections has been going down. As we have explained before, this is not, in the main, a case of people who previously supported the revolution now supporting the opposition. The main haemorrhage of chavista votes has been towards abstention.

There are many, tens and hundreds of thousands, who have become disillusioned, sceptical with the revolution and the fact that after so many years, despite the advances and achievements, there are plenty of urgent basic problems which remain unsolved. Inflation, increased criminality, the lack of jobs, the sabotage of the economy, scarcity of basic food products, power cuts, etc., are all daily experiences for working class Venezuelans. To this we have to add the fact that on many occasions, when the revolutionary masses take direct action to attempt to solve some of these problems, they are faced with the impenetrable wall of the bureaucracy, with the open sabotage of the “Bolivarian” fifth column which plays an open counter-revolutionary role.

We have given some examples of this already. The sabotage of workers’ control in the basic industries, the attacks on the socialist workers’ councils in state institutions, the impunity with which trade union and peasant activists are being assassinated, the impunity of prominent counter-revolutionary leaders who participated in the coup and are free to continue with their provocations.

Recently released Wikileaks cables reveal how “Bolivarian” officials have been in direct contact with the US embassy in Caracas, some criticising others for being “too radical”, others offering a more “moderate” alternative. The US embassy knew in advance about the removal of Eduardo Saman as a Minister of Commerce, who was known as the most radical figure within the Cabinet.

To this we have to add the fact that despite all the hopes raised by the creation of the PSUV and the thorough democratic debate of its two congresses, the organisation’s democratic structures are being emptied of any real content. Earlier this year a decision was taken that the local leadership structures of the party at parish and municipal level would be appointed rather than elected. This has also meant that so-called “cadres” who have never been active in a particular neighbourhood are parachuted in to reorganise the work. The PSUV Youth organisation, three years from its founding congress where the bureaucracy was defeated on all issues, still has no elected leadership and no plans for another congress. All this, necessarily, has a profoundly demoralising impact on the active layers, which are crucial in order to organise and mobilise the wider masses of the Bolivarian revolution.

It can all be reduced to one question: the struggle between reform and revolution. So far the Bolivarian revolution has achieved wonders, particularly in the fields of education, healthcare and above all in the process of raising the political awareness and organisation of the masses of working people and the poor to an unprecedented level. The revolution has raised the issue of socialism and has posed a challenge to the capitalist system, the rotten and parasitical Venezuelan ruling class and imperialism. The problem is that this challenge has not been taken up and followed through to the end.

The capitalists still control key sectors of the economy and the state is still the old bourgeois state which was created and perfected to serve the interests of the ruling class. The normal functioning of the capitalist system has been disrupted, creating chaos, crime, disorganisation, but it has not been brushed aside and replaced by a new system of rational planning of the economy under the democratic control of working people. A clear break with capitalism is the only thing that can untangle the present situation of deadlock. What is required is the expropriation of the capitalist class and to put the key levers of the economy and society in the hands of working people through democratically elected committees and councils.

This is the context in which the 2012 elections will take place. It is to be expected that as the election date approaches, in a context of uncertainty about the results, other figures from within the Bolivarian camp may jump ship and join the opposition. If the current half-way situation is not reversed then a victory in the presidential elections is by no means assured. It is true that the revolutionary masses have so far responded to all the challenges and risen to the occasion. However, the revolutionary enthusiasm of the masses also has its limits.

There are tens of thousands of revolutionary activists who are sick and tired of this situation. Chavez’s ill health also revealed the dangers facing a revolution which is, in effect, too dependent on one man alone. If the left wing of the Bolivarian movement were to organise around a clear socialist programme, it would immediately win the enthusiastic support of millions. There is no time to waste. Neither bureaucrats nor capitalists – forward with the socialist revolution!