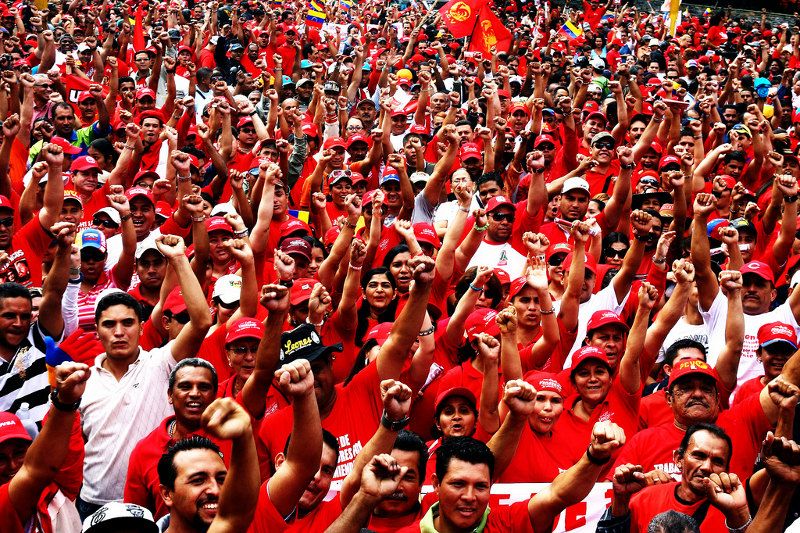 This is in opposition to the bureaucratic clique at the top that is trying to impose itself with any means necessary, with the aim of imposing a programme of concessions to the ruling class and the abandonment of any pretence of a socialist programme.

The only alternative to the serious crisis which the Bolivarian Revolution is going through is to radicalise it along socialist lines, by completing the expropriation under workers’ control of the capitalists and the dismantling of the bourgeois state, creating revolutionary people’s militias and mobilising the masses to defeat the fascist assault. That should be the role of the ANC. Dialogue with sections of the capitalist class and the [opposition coalition] MUD offer no way out of the current crisis, but on the contrary, it makes things worse. The following programme is the proposal of the “Lucha de Clases” Marxist Tendency of the PSUV for the National Constituent Assembly.

What revolutionary programme does the working class and the people need for the National Constituent Assembly?

The current offensive on the part of reaction and imperialism against the government of Nicolas Maduro is merely the continuation of 18 years of attacks (economic sabotage, strikes of capital, hoarding, speculation, coup plotting, rioting, paramilitary infiltration, contract killings, bosses’ lockouts, and so on).

The key difference now is that the revolution finds itself at a very low ebb with popular support in decline, as we saw in the defeat in the National Assembly elections [of December 2015.] The reasons for this are both economic and political.

On the economic front, the world capitalist crisis has led to a collapse in oil prices which has severely reduced the country’s hard currency income, revealing the limitations of an economic model based on oil revenues. It is no longer possible to invest oil revenues on social spending while maintaining a capitalist economy. The attempt to regulate the capitalist economy (with price and foreign exchange controls) to the benefit of working people, has failed. The policy adopted by the government to deal with this crisis has been completely counter-productive. It keeps paying the foreign debt, on time and in full, while imports of food, spare parts and medicines is slashed, worsening scarcity and speculation. Dollars obtained from the sale of oil are handed over, without any control or accountability, to private businesses which then siphon them off into the black market. In order to finance the budget deficit, the government has resorted to the uncontrolled printing of money without any backing in production or hard currency reserves. This has sparked an inflationary spiral that hits workers in the pocket. The government continues to make appeals to private capitalists to invest and offers them concessions (lifting price controls, handing over dollars at subsidised prices, creating special economic zones, opening up the “Arco minero” for multinational exploitation, etc.). [The Arco Minero is an area of 114,000 square kilometres in the South-east of Venezuela rich in minerals].

On the political front, corruption, bureaucracy and reformism curtails and stifles the revolutionary initiative of the working class and the organised people. The people are called to struggle against imperialism and the parasitic bourgeoisie, but are not allowed to take over the reins themselves. They have organised the “Congreso de la Patria” [Congress of the Fatherland], but this is controlled by the same cliques as always. The working people suffer hardships, while high officials live in privileged conditions.

The combination of these economic and political factors is leading to demoralisation, scepticism and apathy among the revolutionary masses, which have always been the backbone and the bedrock of support of the Bolivarian Revolution. All this has led to a situation where we are now facing the threat of overthrow of the Maduro government at the hands of the bourgeois reaction, which would be an absolute disaster for the working class.

We firmly oppose this onslaught of reaction and imperialism. At the same time we must warn that reformism, half-measures, bureaucracy and corruption are preparing the ground for the victory of the reactionary opposition. The only way to face up to these problems is by taking measures which would allow us to really defeat the oligarchy (capitalists, landowners and bankers) and imperialism.

For an economy under the control of the worker majority and for the benefit of the people, not a handful of parasites.

This programme consists of measures which put into practice the struggle for a socialist economy and for the destruction of the bourgeois state, and represents the legacy of Chavez as explained in his speech “Turn the Rudder” as well as in the “Socialist Fatherland Plan”. It is time to complete the revolution.

We will fight for this programme as part of the campaign for the National Constituent Assembly, but also, and above all, in every factory, neighbourhood, school and university.

In order to implement this programme we can only trust in our own forces, the forces of the working class and the revolutionary people which so many times have defended the Bolivarian revolution at all key junctures.

Only the people can save the people. The working class must take power. The revolution can only be defended by completing it. Expropriate the oligarchs.