Yesterday the Bolivarian movement in Venezuela organised a huge rally of a million people in support of the Yes-vote in Sunday's referendum. This shows that the power is there to put an end to capitalism in Venezuela once and for all. However, at the same time a series of provocations have taken place on the part of reactionary gangs, which are a warning of what could come if the revolution is not completed.

From the early morning hours of yesterday, Thursday, February 12, hundred of thousands marched on the streets of Caracas. The masses once again responded to the call for an all-out demonstration in favour of the YES-vote in the referendum on the constitutional amendment of February 15. The demonstration started in the popular neighbourhood Petare and ended in Bolivar Avenue with one million people listening to a speech by president Chavez. 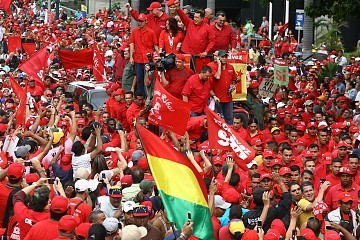 As we have explained (see Venezuela: Vote YES in the referendum on the constitutional amendment and move on to complete the revolution!), the masses of Venezuela see this question in class terms, as a battle between revolution and counter-revolution. This was also the mood that prevailed in the march on Thursday.

Notably, many workers from basic industries and trade unions participated in the demonstration. There was also a remarkable participation of young people which clearly cut across the lie of the media about the supposed "student" opposition to the Bolivarian government. 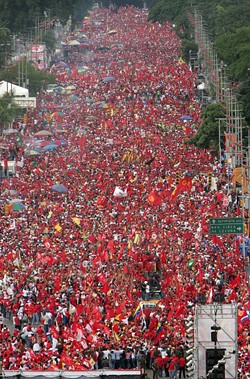 The Marxists of the CMR also intervened in the demonstration. Once again, our stall with books of Marx, Engels, Lenin, Rosa Luxemburg, Ted Grant and Alan Woods attracted the attention of many people. We also sold the new issue of our paper, El Militante, which carried articles analysing the significance of the referendum and the remaining tasks of the revolution.

A special focus in our intervention was to rally support for the workers of the Mitsubishi factory in Anzoategui, who recently suffered an attack on the part of corrupt elements inside the Anzoategui regional police, against the factory occupation, which resulted in two deaths (see Venezuela: The killing of Mitsubishi workers - what really happened). To promote a campaign on this among Bolivarian activists we produced 3,000 flyers which were handed out at the demonstration. We also collected 250 signatures for an appeal condemning the attack. Our aim is to orientate this campaign towards the PSUV rank and file and the heart of the Bolivarian movement.

Recent events in Venezuela confirm that the counter-revolutionaries are carrying out acts of violence in order to create chaos and instability in the country. On January 17, six Colombian paramilitaries were detained in Maracay, Aragua State, who were carrying weapons, grenades and two kilograms of explosives. On January 27 a further 31 Colombians were arrested, accused of being linked to a paramilitary group. A similar case occurred in El Vigia, state of Mérida where four members of the Colombian fascist paramilitary-group "The Block of Black Eagles" were captured with a huge amount of arms, explosives, grenades and maps with detailed plans of terrorist acts. 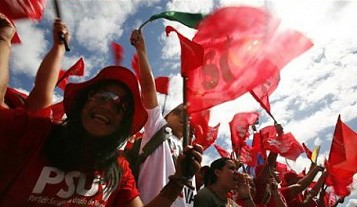 This counter-revolutionary offensive also found an echo in the outburst of violent clashes of petit-bourgeois students with the police. In Cagua, Aragua State, twelve students attacked the police with Molotov cocktails during a demonstration against the constitutional amendment. Similar events unfolded in Cumana (Sucre State), Mérida and Maturín (Monagas State). The worst case was Táchira state, where fascist gangs have promoted violence on the streets for the last two weeks.

All this indicates that the counter-revolution is not limiting itself to peaceful parliamentary activity. It is not at all "democratic", as the international and national bourgeois media would like us believe. However, the Bolivarian masses showed their strength once again in yesterday's huge demonstration. With this strength it would be entirely possible to deal a final blow to the counter-revolution with the expropriation of its economic power, by taking over the land, banks and industry. This is the main task of the Venezuelan revolution and it is with this perspective in mind that we call upon everyone to vote YES in Sunday's referendum.

Video of the march