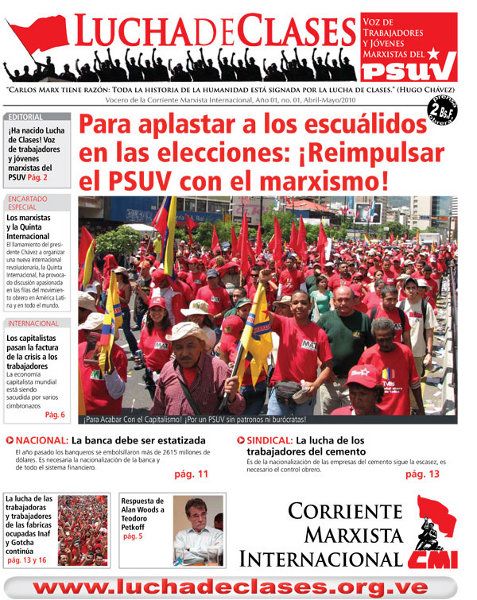 The Venezuelan revolution is at a crossroads – either it proceeds to expropriate the bourgeoisie and do away with the bourgeois state or the right-wing reactionary oligarchy will start to gain ground and threaten all that has been achieved so far. In this context the PSUV is the key. It must adopt a Marxist programme. That is why the Marxists have launched Lucha de Clases (Class Struggle) as a tool for the transformation of the PSUV into a Marxist revolutionary party capable of leading the socialist revolution.

“Karl Marx was right: All human history is marked by class struggle.'' Comrade Hugo Chavez on his Alo Presidente 351 (February 7, 2010)

Lucha de Clases is born! Voice of Marxist workers and youth of the PSUV.

The Bolivarian revolution is at a crucial crossroads: either the revolution is radicalized or it will be in serious danger. Already a sector of those known as the "endogenous right" has begun to take advantage of the economic crisis caused by capitalism. Capitalism has failed as a worldwide economic system. As we can see, the bourgeoisie in Venezuela is unable to develop the productive forces; the only thing that it has been able to develop has been a constant sabotage, economic paralysis, disinvestment, guarimbas [street riots] and coups. The PPT and Henry Falcón are trying to hugely magnify the contradictions within the revolution. For the revolution to maintain its social base, it is necessary to nationalise the banks, industries, the land and all the abandoned and underutilised factories and place them under the control of the workers and the organized people. Only in this way can the most pressing needs of the masses be solved: health, education, housing, food, security, recreation, culture, sports, art, science.

The "recovery" of the capitalist system

Instead of the so-called "recovery" and "end of the crisis" that the IMF was talking about in October, what we are seeing now is completely the opposite. The world bourgeoisie are extremely concerned about the Greek crisis, which has threatened to bring down the euro and forced a multi-billion-dollar rescue package to be patched together by Germany, France and the IMF. Recently the President of the Federal Reserve expressed concern about the Greek crisis and how it can affect the recovery of the system in the US. We are of course likely to see an economic recovery, but this does not mean that the contradictions that flow from a system in crisis will not become sharper.

"Some people say that we don’t have blood in our veins. Well, we really are here to do business and this is what we have told the state." Alejandro Uzcategui, President of Empreven [an organization of entrepreneurs in Venezuela] in an interview with Vanessa Davies during Backlash on August 19, 2009.

World Bank forecasts for GDP growth in Latin America this year range from 4.7% for Chile, to the lowest of 1.7% for Ecuador. The only country expected to be in recession this year will be Venezuela with a fall of -0.2%. Government figures also are not very flattering: they are forecasting 0.5% growth in 2010, while Giordani [Minister of Planning] aims to reach 3% or 4%, which is an illusion, since the electricity crisis in the country will not let us grow by that much.

What we saw last year was a drastic drop in GDP of -3.3%. According to the Central Bank of Venezuela, the recession has been caused by the falling prices of oil. Private investment fell by 7.0% in the last quarter of 2009 compared with the same period in 2008. The recession has led to a sharp drop in gross fixed capital formation (GFCF) which fell at an annual rate of 8.2%.

What we are seeing is what the supporters of the International Marxist Tendency have said over and over again: the bourgeoisie no longer plays any role other than a counter-revolutionary one. This is also the case with the so-called “socialist businessmen" such as the above quoted Alejandro Uzcategui, President of Empreven.

The role of the party is the key to putting an end to the current crisis the Venezuelan economy is going through. The Congress of the United Socialist Party [PSUV] should have been used to announce a revolutionary programme that can put a definitive end to the domination of capital and remove the existing state apparatus, which remains bourgeois. However, at the conference films were shown, delegates were separated according to the state they came from and at the end of the congress only one third of the delegates elected were participating. Comrade Chavez has explained time and again that what needs to be done is to destroy the state apparatus; well, it is time to do so! These are the issues we will take up wherever the PSUV is active, within the patrols, in the halls of social struggle, in the factories and unions.

It is time to discuss and open up all the spaces of debate. The Marxists will put forward our contribution, our proposals, as we did in our recent document produced for the extraordinary congress that states:

“Do we want more housing, hospitals, schools, social centres and benefits for workers? Then, nationalize the banks! Last year alone, bankers pocketed more than $2,615 billion, while we face a huge deficit of approximately 14,000 homes not built in the last quarter.

“Do we want to maintain and create more jobs? Then nationalise industry, starting with the multinationals that sack and harass workers and trade unionists such as Mitsubishi, Toyota, Vivex and Johnson's Control. Nationalise immediately all companies occupied by their workers. The bosses have revealed their parasitical nature during the years of President Chavez’s government, bringing industry almost to a halt.

“ Since sectarians, as in general every kind of blunderer and miracle-man, are toppled by reality at each step, they live in a state of perpetual exasperation, complaining about the ‘regime’ and the ‘methods’ and ceaselessly wallowing in small intrigues. In their own circles they customarily carry on a regime of despotism. The political prostration of sectarianism serves to complement, shadow-like, the prostration of opportunism, revealing no revolutionary vistas.” (Leon Trotsky, Transitional Programme).

As we saw in the case of Orlando Chirino in the past, today we see the same phenomenon within our former organization, the Revolutionary Marxist Current. The activists of the International Marxist Tendency witnessed a continuous process of bureaucratic degeneration. The comradely criticism we made of the comrades of our former organization led to the expulsion of most of our supporters active in the J-PSUV, of the comrades in several occupied factories and under workers' control (such as Cemex, Inaf, Gotcha, Inveval) who were members of the CMR. The drastic turn which our former comrades have taken has been noticeable in several attacks against comrade Chavez. We saw this in their recent articles, such as “The commander in his labyrinth” (El comandante en su laberinto). We wish to make it clear to all our friends, comrades and supporters that the comrades of the International Marxist Tendency have absolutely nothing to do with the sectarian turn of the CMR and El Militante.

While claiming to be part of the PSUV, they are in fact merely a group of observers who comment on events from outside the living process. They carry out no coordinated work in the branches in the party, nor amongst the youth, nor in the assemblies of people's movements, nor at the extraordinary congress. In practice they are not part of the PSUV and their idea is to create a larger group and finally break with the PSUV. Our tactics have nothing to do with this sectarian policy. We struggle for the PSUV to become the party that can lead the revolution to victory. The criticisms and polemics that we raise will always be comradely and aimed at helping to raise the political level of the PSUV membership as whole.

Given the great debate that has opened up today within the ranks of the PSUV, the comrades grouped around the journal Lucha de Clases want to offer our contribution to the whole membership. We say very clearly: it is time to put an end to the private ownership of the means of production, the banks and the land. We are in solidarity with each and every one of the struggles of the working class. We invite all PSUV comrades, trade unionists, workers, peasants to join us in the struggle for a Marxist programme for the PSUV. It is time to radicalise the revolution!