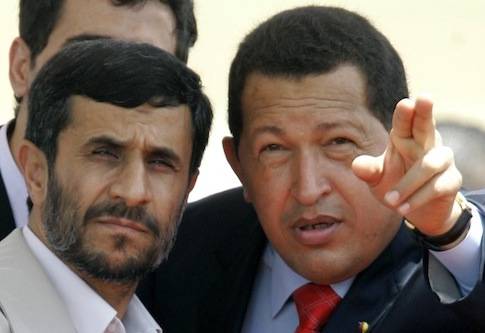 Chavez is about to visit Iran. We understand the reasons for reaching trade deals with a regime like the Iranian. The US is attempting to isolate Venezuela, but we believe it is one thing to reach such deals and it is another to present the Iranian regime as if it were somehow “revolutionary”. To do such a thing would sow confusion among the Iranian workers, the only ones who have a genuine interest in defending the Bolivarian Revolution.

We are on the eve of the fifth official visit to by Venezuelan president Hugo Chavez to Iran. The closer relationship of Venezuela with the Iranian regime raises a number of important issues for revolutionaries in both countries and indeed internationally about the relationship between revolutionary foreign policy and diplomacy.

The International Marxist Tendency has defended the Bolivarian revolution from the beginning, supporting all its progressive aspects while pointing out that in order for the revolution to be completed it needs to put an end to capitalism in Venezuela, and at the same time it needs to spread to other countries if it is to survive. Our defence of the Venezuelan revolution is known to all. At the same time it is also our duty as revolutionaries to point out those aspects of the policies of the Venezuelan government that in our opinion do not help the cause of the Bolivarian revolution.

Over the past few years we have welcomed how the revolutionary process in Venezuela has brought ever more benefits to a greater section of society. There have been many clear and unequivocally pro-working class moves in Venezuela. The various missions like Mision Robinson, Mision Barrio Adentro, Mision Habitat, Mision Zamora and others have made a significant impact on the lives of the poor and the marginalised in Venezuelan society. At the same time President Hugo Chavez has reversed the trend towards privatisation of public services, companies and services, and firmly established in the Constitution the nationalised character of the oil industry. Legislation has also been introduced to recognise the rights of indigenous peoples, and the rights of women are enshrined in the Bolivarian Constitution.

Above all, the revolution in Venezuela derives its strength from the revolutionary movement of millions of ordinary working people, who are organising to change their lives and are participating directly in deciding over their own future. This situation has led to the organisation of democratic class struggle trade unions, to a new mood of confidence in the workers' movement, to factory occupations, etc. President Hugo Chavez has accompanied and encouraged this process, and has taken concrete measures to support it. In January 2005 he signed the decree of expropriation of Venepal, a paper mill that had been occupied by its workers for months in a bitter struggle against the owners. The factory was put under a form of workers' management. After this, other factories followed and Chavez made a public appeal for workers to take over factories that had been left idle by its owners. In March 2005, Carlos Lanz was appointed as a director of the state-owned aluminium smelter ALCASA in Guayana, with the aim of starting an experience of workers' control, where the workers elect and have the right to recall all managerial layers in the company.

It is obvious that the Venezuelan government needs to maintain quite close relations with all fellow OPEC members, including Iran. It is a basic requirement for an oil producing country to try to strengthen OPEC, against the attempts of imperialism and the oil multinationals to divide the oil producing countries and drive down the price of this precious raw material, which is one of the main sources of income for these countries. It is also obvious that the Iranian government is willing and able to provide Venezuela with technology, investment and expertise that are crucial in developing its infrastructure and agriculture, which Venezuela needs. Venezuela is also trying to widen its scope of alternative markets, particularly in Asia, to reduce the impact of any future problems with the Americans, and reduce its historical dependency on the United States.

Diplomacy and trade relations are a necessary part of the foreign policy of any country, even one where there is a revolution taking place. Lenin for example considered offering the western capitalists concessions in Siberia, as the weak, young workers' state did not have the means to develop the region. Lenin insisted that the only way of getting the investment, the technology that was needed to develop the productive forces, was to grant concessions to foreign capital. The idea was that by guaranteeing the capitalists profits, they could develop the region, obtain the new means of production, the technique and so on, and this would be to the benefit of the revolution.

In 1918 in his "Left-wing" Childishness and the Petty-Bourgeois Mentality Lenin points out that, "We, the party of the proletariat, have no other way of acquiring the ability to organise large-scale production on trust lines, as trusts are organised, except by acquiring it from first-class capitalist experts." The following year on February 4, he presented a resolution to the Council of People's Commissars in which he stated that, "The CPC... considers a concession to representatives of foreign capital generally, as a matter of principle, permissible in the interests of developing the country's productive forces..."

However, one must be fully aware of the real character of the regimes with which these deals and agreements are made. Lenin had no doubt about the nature of the capitalists he was dealing with and understood that in the last analysis he could only really count on the working class of all countries for genuine support.

Our appraisal of the Iranian regime has nothing to do with the currently prevailing "axis of evil" propaganda and threats emanating from Washington and its apologists throughout the world. Venezuela is right in standing up in international forums against the imperialist bullying of Iran. Our reservations regarding the relations between Venezuela and Iran rest on our analysis of the genuine long-term interests of the Iranian and Venezuelan working people.

In the recent period we have witnessed a massive growth in the struggle of workers and youth in Iran. As the economic problems have mounted, 90% of the population have been pushed below the poverty line (including, over 16,000 doctors). The great upsurge in workers' struggles during the past two or three years has been caused by the ever deteriorating economic and social situation together with the workers having no access to any official or even legal bodies or procedures for solving/addressing these problems.

The most important of the hundreds of strikes and workers' protests has been the struggle of the drivers and other workers of the Vahed Bus Company in Tehran. These are genuine trade unionists attempting to set up a trade union to address issues such as low wages (which result in the need to hold down two or three jobs), bad working conditions and so on. Their very basic and just demands have been met with heavy repression on the part of the regime. They have been branded as criminals, tortured, put in solitary confinement and sacked. Mansour Ossanlou, the Vahed bus workers' leader, has been jailed for over seven months, held in solitary confinement and denied medical treatment and hired thugs of the pro-regime Labour House and Islamic Labour Councils tried to cut out his tongue and smashed the office of the Vahed trade union and beat up its leaders.

We are sure that the latest privatisation edict by Ayatollah Khamenei, which basically opens up the whole of the country's assets for privatisation will exacerbate the harsh living and working conditions of millions in Iran.

In addition to workers, other sections of society also have their just grievances:

- The youth of Iran, who represent two-thirds of the population, demand basic democratic rights such as freedom of speech and assembly. Whether they are young unemployed workers or students they see this is an aloof and repressive regime.

- Women and girls face discrimination at home, at school, when dealing with any official or government bodies - especially the Islamic courts where a woman's evidence is worth half that of a man - and wherever they are in society.

- National minorities, which make up over half of the population, especially the Kurds, Azeris, Arabs and Baluchis face daily discrimination and denial of basic linguistic and cultural rights. And the Jews of Iran are constantly afraid of being tainted as Israeli collaborators and have been under tremendous pressure due to Dr Ahmadinejad's anti-Semitic remarks and consistent denial of the Holocaust.

All these sections of society, particularly the workers, are struggling for the most basic rights - rights which they briefly had after they overthrew the Shah, in 1979. That was a genuine revolution, but one that was hijacked by the Islamic clerics in order to impose a brutal dictatorship in which the movement of the workers was brutally suppressed.

The contradiction with the situation in Venezuela could not be more striking. The Islamic Republic of Iran is a regime that is fundamentally different from the Bolivarian Republic of Venezuela: instead of 'cogestion' and encouragement of factory occupations Iranian workers are arrested and even shot for demanding their unpaid wages.

If the Bolivarian revolution is to survive it needs to take decisive action to wrest economic power from the ruling class and move in the direction of democratic planning of the economy under workers' control. In that struggle the only allies of the Bolivarian revolution will be the workers and peasants of other countries who are already being inspired by it. Not the reactionary mullahs in Teheran, but the Vahed bus workers.

But if President Chavez and other leading figures of the Venezuelan revolution go beyond the necessary politeness of diplomacy and trade deals, and in some way give "revolutionary" credentials to the Islamic clerics, then Iranian workers will see this as an endorsement of the hated regime they are fighting against and a dismissal of their yearnings for justice and a decent standard of living. This would only serve to undermine the support for the Venezuelan revolution inside Iran, support which as the Bolivarian revolution advances will become more and more necessary.