Share
Tweet
An interesting encounter between a delegation of Inveval workers, who are running their nationalised factory under workers' control, and the Vivex workers who have occupied their plant with the aim of achieving nationalisation - a living example of workers sharing their experience of struggle in the process of the Venezuelan revolution.

Read the original article in Spanish.

This past Friday, 4 December 2008, a delegation of workers from Inveval, the factory expropriated by President Chavez in 2005 and under workers' control, travelled to Barcelona in the state of Anzoátegui to meet with the workers at Vivex who have occupied their factory since 20 November and are struggling for its nationalisation. 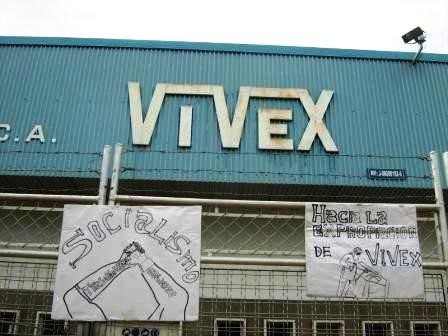 The delegation of Inveval workers along with comrades from the CMR went to Vivex to get to know first hand the situation the workers at Vivex face and to explain their experience in the struggle for workers' control. They met with a group of workers who were on a security shift at the factory while others performed propaganda tasks in Barcelona and other tasks related to the struggle. The first thing that stands out upon entering the factory is the order that the workers have established in the factory, and, despite the fact that they are not working due to a lack of raw material, discipline and morale are high. 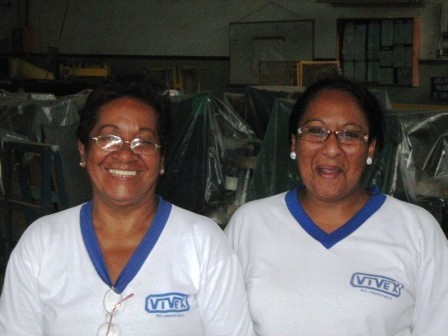 Due to the big impact in the media that the struggle at Vivex has had and the importance of this struggle in the current phase of the Venezuelan revolution, numerous people and collectives have come to the factory to show their solidarity and support for the workers. At an improvised assembly in the factory, Moises Tolosa, member of the legislative assembly of Anzoátegui, who, in the name of the PSUV and the abovementioned institution, gave a message of solidarity to the workers. He noted that the legislative assembly would mediate in this fight but "that there was no doubt that in the mediation they were not neutral, if not on the side of the workers." He noted that these workers' struggles were "the fruit of the economic sabotage of the revolution" and a result of the attempt to "impose neo-liberal policies". He explained that it was the revolutionary rank and file who supported the revolutionary government and that the government had to support these struggles.

The struggle for workers' control 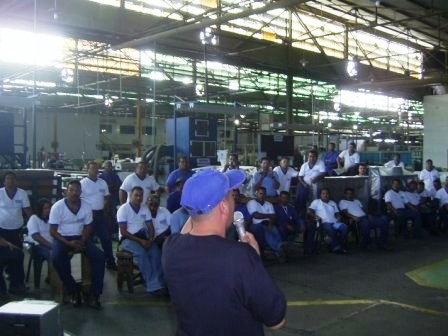 Nelson Rodriguez followed him and spoke on the experience of workers' control at Inveval; the struggle for which was hard until the expropriation was achieved. He also explained how they endured outside the factory in tents in the rain for months. He also spoke about the organisation of the factory council at Inveval and the current problems in the factory as a result of the bureaucratic sabotage they face. He also explained that the only way the Vivex workers could keep their jobs was "to struggle so that the national government expropriate the company, and that the company is run by the workers themselves". 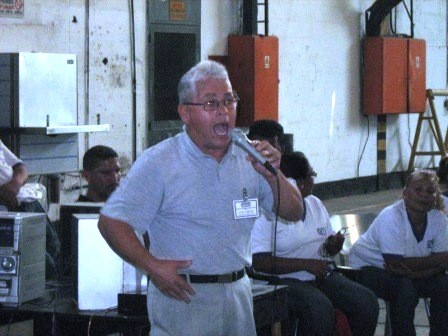 Ramón Montilla spoke next and he spoke of the need for the workers to adopt their own ideology (Marxism) against the ideology of the bourgeois, which makes capitalist exploitation seem normal to the workers. Visibly moved, Ramón explained that now was the time of the working class in the revolution and the vote for constitutional reform had to be supported so that President Chavez was re-elected because "we cannot allow the right to return to government, to those who will attack the workers' struggles, not like today when the workers have rights which are defended by the people and the government. In the fourth republic workers were removed from the factories and struggles such as these were brutally repressed." 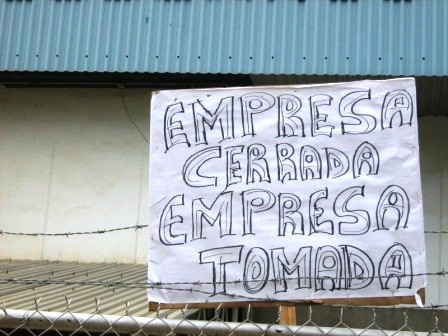 Francisco Rivero of the CMR greeted the workers of Vivex saying that the conflict at Vivex marked the beginning of a new offensive of the right wing and the bourgeoisie against the revolution and especially against the auto workers in attempt to crush them and impose cooperatives in all companies and destroy the trade union organisations. For this reason the struggle at Vivex was of the utmost importance for the rest of the auto sector since it was the first offensive battle on the part of the multinational auto companies against the revolution and against the workers. "They want the Venezuelan workers to pay for the crisis of capitalism, which is affecting the large North American auto companies". "Right now they are asking for assistance," explained Francisco, "36 billion dollars to avoid going broke, and it's a given that this help will be accompanied by new cuts and attacks on the workers both inside and outside the United States. The struggle at Vivex is a result of the crisis in the United States and the fact that the capitalists and imperialists and their sidekicks in Venezuela want the workers to pay". Amidst a loud applause Francisco said that the only choice before the workers was to kneel down before or liberate themselves from the bosses.

Different Vivex workers spoke saying that the workers were against class conciliation and that there were 21 workers with precautionary measures, including several Sutra-Vivex directors, with the false accusation of preventing the rest of the workers from gaining access to work. The comrades at Vivex explained that just last Thursday the same judge tried to enter the factory in an attempt to apply an eviction order but was stopped by the action of the workers.

Sabotage to weaken the workers 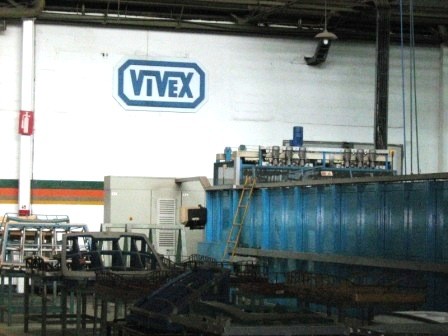 The workers also explained their working conditions before they began their struggle to change them. They explained that the water they drank came from tanks with non-potable water and that the workers got sick as a result. This was despite their requests to the boss to change and improve the tanks. There was also a trick on the part of the boss where he thought that 23 days after the election that the right wing of Primero Justicia would win and that this would allow him to end the workers' struggle. They also explained the racist attitude and contempt that the boss, Ernesto Viso (father of the famous Venezuelan race car driver), had for the workers. The boss had other tricks to confuse the workers, such as blaming the national government for the lack of production due to the lack of foreign currency for the import of raw material. For months the boss had 30% of the workers at work and the rest at home to weaken their organisation and unity. "He had a plan to destabilise the factory by keeping the raw material at the ports of La Guaira and Puerto Cabello. There were about 80 containers there while there was practically no work going on." They also explained that the basic goal of the bosses is to introduce cooperatives throughout the auto sector and to dismantle the rights that they have won through union struggles. Their objective is to get rid of the trade unions.

Solidarity from workers of Polar 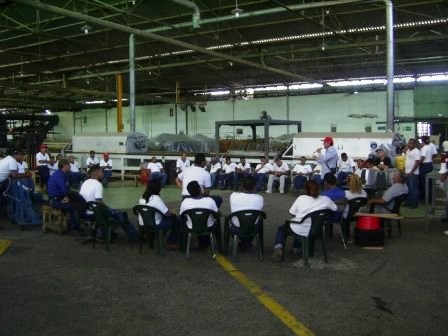 The Vivex workers received messages of solidarity from Tapas Corona and the workers of Unicasa, as well as from others. During the visit of the Inveval workers, a delegation of workers from the union at Polar provided economic support to the Vivex workers in a humble ceremony at the plant which touched all present (see video below). Now more than ever, national and international solidarity with the workers of Vivex is needed for them to achieve victory and secure the nationalisation of the factory. This struggle shows the willingness to struggle on the part of the working class and their high level of class consciousness. If there were trade union leaders of the UNT at a national level who led the union struggle for factory occupations throughout Venezuela- and not as they are doing now in the mere struggle for demands, with seemingly radical and socialist language while they bureaucratically fight amongst themselves for positions in the UNT - the working class could put itself at the head of the revolution and show the whole of the people the path to genuine socialism.

Solidarity of workers from Polar for Vivex