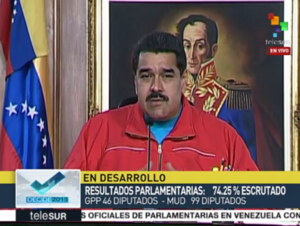 Late into the night on 6th December, the Venezuelan National Electoral Council announced provisional but conclusive results for the parliamentary election. The counter-revolutionary opposition MUD had won 99 seats to the Bolivarian PSUV’s 46, with another 22 remaining to be allocated. This is a serious setback and it is our duty to analyse the reasons and explain the likely consequences.

First of all it is worth noting that there were no riots in the streets, no challenging of the results and no outcry of “fraud” in the world’s media. Every time the Bolivarian revolution had won an election contest (and it has won many in the last 17 years) we were subjected to a campaign of lies and disinformation. “Venezuela is a dictatorship”; “there’s no freedom of expression”; “an authoritarian regime”, was the usual chorus from CNN, FoxNews and the Spanish ABC and El País. A very peculiar sort of “dictatorship” which only exists when the capitalist parties are defeated, but magically disappears, like a Schrödinger’s cat, if it is the revolutionary forces which are beaten.

The turnout in this election was high: 74.25% of the 19 million voters, 8 points above that of the previous National Assembly election in 2010, though it did not reach the level of the 2013 presidential election (when it was 80%). From very early in the morning there was a full mobilisation in the poor barrios and working class areas of the big cities to go out to vote, but a similar and even bigger mobilisation took place amongst opposition voters. There were queues all day at the polling booths and finally the National Electoral Council (CNE) had to extend the voting time one additional hour, until 7 pm. In many cases polling booths remained opened for another hour or more, making sure everyone who was in the queue was allowed to vote. Scandalously, the main leaders of the “democratic” opposition protested this decision and demanded that polling booths be closed!

Even though full national results have not been published yet, it is possible to make a first analysis of the figures. If we compare the figures with the 2010 national assembly elections we can see that while the vote for the revolutionary parties generally held up, that of the opposition massively increased, which would indicate that the majority of the increased participation as well as new voters went to them. If the comparison is made with the more recent 2013 presidential election, we can see how the PSUV lost nearly 1.5 million votes while the opposition vote held up and even increased slightly.

(Note: 2015 figures are only an estimate and should be treated with caution)

What are the main reasons for this defeat?

Before the election we had already written a long analysis of the particularly challenging situation facing the Bolivarian revolution. There are a number of factors which should not be underestimated: the media campaign against the revolution, imperialist interference and harassment (directly by the US and indirectly via Colombia, Guyana, the new Argentinean president Macri, OAS, etc), sabotage of the economy and increased insecurity and crime. However, it cannot be said that these were decisive as they were already present in previous elections which the PSUV managed to win.

There are also a number of new problems or some which have made matters much worse, particularly in the field of the economy. The collapse in the price of oil particularly, has greatly reduced the margin for manoeuvre for the government in terms of the money available for its social policies and its ability to import food to supply a domestic market strangled by the rebellion of capitalist producers against price controls.

Hyperinflation, worsened scarcity of basic products, racketeering, the black market - all of these have clearly played a key role. Maduro mentioned them in his speech accepting the election results, when he stated “it could be said that the economic war has won”. This is only a partial explanation. The revolutionary masses have in the past withstood the economic assault of the capitalist class, particularly during the 2 month long bosses’ lockout and sabotage of the oil industry from December 2002 until early February 2003. Why was it different this time?

It was the combination of the above factors with the sentiment that the Bolivarian leadership was either unable or unwilling to deal decisively with these problems. It is no good to denounce Grupo Polar and its owner Mendoza constantly for the role they play in scarcity of basic products. That is perfectly true, and a large section of the masses are fully aware of it. The problem is when these denunciations are not accompanied by concrete action. There have been constant threats that Grupo Polar was to be expropriated. On May Day this year, Polar workers in struggle were on the main stage of the Bolivarian march. Nothing happened.

On top of this inaction, bureaucratism and corruption have reached unprecedented levels, causing demoralisation, scepticism and even cynicism among wide layers of the Bolivarian masses and its active elements. If expropriated and state-owned factories, where workers have attempted to implement elements of workers’ control and management in different degrees but have been defeated by the bureaucracy, are now riddled with mismanagement and open corruption, this strengthens the case of the capitalist opposition that nationalisation does not work. Worse, it demoralises working class activists fighting for workers’ control.

There will be those who will try to blame the masses and their “low level of consciousness” for the defeat. Those voices can already be heard. “The revolution gave them education, health care and housing, and they now vote for the opposition”. This is a completely false argument which is used by the reformists and bureaucrats as a justification. It doesn’t explain anything.

The same working class and poor masses have shown their revolutionary instinct, spirit of self-sacrifice and loyalty to the Bolivarian project in countless occasions. It was the masses which defeated the coup in 2002, the bosses lockout in 2002-03, the 2004 guarimbas and recall referendum, responded in their millions to Chavez’s call to create the PSUV and fight for socialism, etc.

The problem is that every time they have moved forward in an attempt to wrest power from the ruling class, by setting up socialist workers’ councils in state institutions, by occupying factories and running them under workers’ control, by taking over the land, by setting up socialist communes in the neighbourhoods, they have been blocked and pushed back by the bureaucracy which in reality is the capitalist fifth column within the Bolivarian movement.

To give just three recent examples. Industrias Diana is a food plant processing oil and margarine which was expropriated in 2008 by Chavez and has been running under workers’ control ever since. In 2013, Maduro’s Minister of Food Osorio decided to impose a new manager without consulting the workers and against their will. The workers resisted and argued that they had a say in the matter. The clash became a conflict over the issue of workers’ control. Finally, after months of struggle, the workers managed to preserve it and the new manager was removed.

A similar clash developed at Fama de America, a coffee processing plant which was expropriated in 2010 as a result of the workers’ struggle. Currently there is a conflict over the sacking of one of the leading worker activists in the plant by management. The workers argue that the dismissal is a political attack on the workers’ organisation.

In a separate incident hundreds of workers were dismissed from the former Ministry of Environment when it was fused with another one and reorganised. The workers have been fighting for their rights but have not been heard by the authorities.

These are just some examples which could be replicated at all levels. It is in this context that talk of “revolution” and “socialism” becomes empty rhetoric. As we warned before the election: “there is a serious danger that the opposition will get a good result in the parliamentary elections, winning a majority of the votes and perhaps even a majority of the seats. (...) If that happens, it will not be the fault of the Bolivarian masses, but that of their reformist leaders, who have consistently avoided the path of expropriating the capitalist class, and have chosen instead to appeal to the goodwill of private capitalists, or to use administrative measures to try to regulate the capitalist market.” 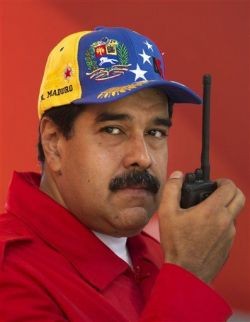 It is clear that the counter-revolution will use the position it has won in the National Assembly to start a relentless assault on all conquests of the revolution (and these are many and wide ranging). They will aim to deal with the economic problems facing Venezuela by making the workers’ pay, lifting price controls, cutting social spending, devaluing the currency, etc.

Above all they will use their victory to launch an assault on the power of the institutions which remain in the hands of the Bolivarian movement, particularly by moving to trigger a presidential recall referendum at the earliest opportunity. They will pass an amnesty law to release all counter-revolutionary activists and politicians in jail for their part in the riots in 2014 which caused 43 deaths. 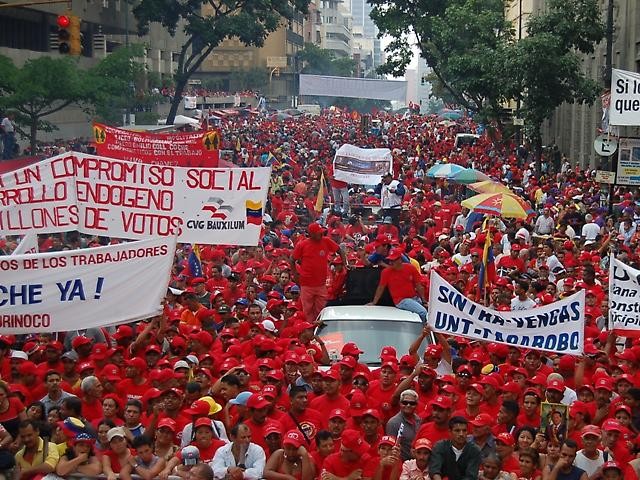 In the first instance, the defeat will be a heavy blow for the revolutionary activists. For many years the movement has been on a roll with victory after victory. However, after the dust has settled, there will be an intense political discussion about the causes for the defeat. Like in the Spanish revolution, when the crushing of the October 1934 uprising led to the extreme radicalisation of the socialist organisations (starting with the Socialist Youth), the Venezuelan defeat should lead to the strengthening of the more radical and revolutionary wing of Chavismo.

At the same time, there will be renewed pressure on the reformist and bureaucratic wing of the movement. Some are already talking of the need for “dialogue” and “compromise”. Some corrupt high ranking officials will already be preparing to switch sides in defence of their privileges and loot. This should produce a healthy clearing of the decks within the Bolivarian movement.

The Venezuelan masses will not easily give up the conquests of the last decade. It remains to be seen how fast the capitalist opposition will attempt to move to dismantle key social programs, expelling the Cuban doctors from Mision Barrio Adentro, abolishing education programs, attacking the newly created universities, curtailing pension rights, privatising state-owned companies, conducting a political purge in the state, etc. They now feel confident and that confidence might lead them to overextend themselves. Any major provocation can provoke a counter-reaction of the Bolivarian masses, which have been defeated in the electoral field but are by no means crushed.

In this new terrain of struggle, the crucial question is to learn the main lesson: the time in which reformism seemed to work (implementing massive social programs without fundamentally expropriating the oligarchy) has come to an end. The Bolivarian revolution can only recover from this blow by adopting a clear socialist program, by putting into practice the legacy of President Hugo Chavez who in his “Turn the Rudder” (Golpe de Timón) speech outlined the two main pending tasks: a socialist economy and the destruction of the bourgeois state.

An ideological struggle is required. A clear revolutionary socialist program is needed if the Bolivarian movement is to recover from this blow.