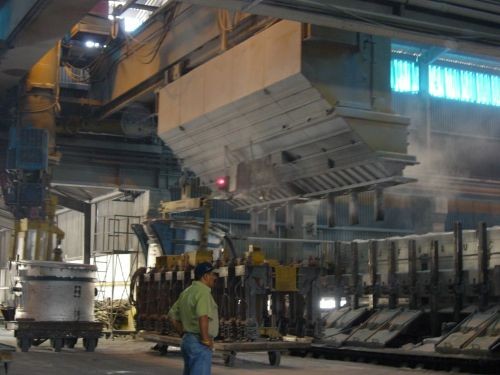 ALCASA is an aluminium plant in Ciudad Bolivar in Venezuela. It is being run under cogestion, formally speaking workers’ participation. But when you take a closer look what we see is that in practice the workforce is moving more and more towards genuine workers’ control. Managers are elected and do not get higher wages than those they had before becoming managers, and so on. It confirms that the Venezuelan workers are in the vanguard of the world revolution.

On Thursday, December 6, an assembly of around 150 workers took place at the aluminium factory ALCASA, organized by the executive board of the plant. This is a factory that employs around 3000 workers, situated in Puerto Ordáz (Ciudad Guayana) in the industrialized Bolivar state in the eastern part of Venezuela.

Since Februrary 2005 ALCASA has been run under so-called cogestión, workers’ co-management. The process started when Hugo Chavez appointed Carlos Lanz, a former guerrilla activist and a self-confessed Marxist, as the director of the company.

In the assembly on December 6 the executive launched a discussion with the workers by proposing new regulations for the voceros (spokesmen elected by the workers) and the functioning of workshops. In these proposals it is emphasized that the spokesmen are elected freely by the workers in the different sections of the plant, that they do not receive any additional money or priviliges for defending the cause of their fellow workers and that their mandate can be re-called by a 70%-majority.

Elio Sayago, one of ALCASA’s directors, opened the discussion at the assembly. He stressed that these proposals must be debated among the workers and their spokesmen in every part of the plant. He went on to say that this process of co-management was not just about ALCASA as an isolated factor, but about society in general. “In the Bolivarian constitution there are still some contradictions”, he said, “the contradiction between the ideals of the constitution and the reality we are facing. Unemployment is a good example. What we need is therefore a whole new economic model, and co-management plays an important part in this respect.”

Other speakers explained that the process of workers’ co-management is also a process where the workers need to learn how to exercise power. It was pointed out that the work of educating the workers must be stepped up, refering to the school that is situated at the plant in which there are classes to train them in ideology and politics. During the discussions it was also emphazised that assemblies must be held regularly to allow the rank-and-file workers to participate in the discussions.

The cogestión at ALCASA has developed to a somewhat more advanced stage than in other state-owned companies. This is first and foremost due to the fact that the advanced layers in the factory have regarded cogestión as power to the workers and not just participation in the decisions. In fact the poster published by the factory executive and with the support of the Ministry of Basic Industries and Mining, has the subtitle “all power to the workers”.

In this sense, the co-management at ALCASA has a profoundly revolutionary character. In contrast to the reformist idea of workers’ participation, a model used massively in Europe in order to trick the workers out of exercising real power (see the article by Ted Grant), what is being developed at ALCASA is a model in which the workers control production.
A good example was given in an article we published in June which is well worth reproducing:

”In ALCASA, it is the workers themselves who elect the managers. These managers keep the same wage level they had before being elected and are subject to the right of recall. In the same article, Edgar Caldera gives an example of how workers’ control at the same time means making production more efficient and getting rid of bureaucracy, mismanagement and corruption. He explains how in the Reduction Line III an outside company had been in charge of maintenance and repairs. But in fact this was a source of corruption and in practice it meant that for about 7 years, 10% of the reduction cells in the line had been idle. At a mass meeting the workers decided to kick out the outside contractor and hire the necessary amount of workers to do the same job in house. As a result the repairs were carried out in record time and now the line is working at full capacity.” (Chavez announces expropriation of closed factories: Venezuela debates socialism by Jorge Martin).

In the principles of co-management that is up on the wall in the corridor of the plant, one of the points states: “Functional delegation – in the sense that no-one is allowed to decide questions that have not been decided by the rank and file”. Furthermore it is worth noting that it is not just the spokesmen (voceros) that the workers elect, but also the managers (gerencias) and the workers’ co-management has even been extended to giving the workers powers to modify the budget, which was changed in March 2005 to fit the new policies of cogestión.

But the cogestión at ALCASA also has a deeply revolutionary content in the sense that it is not seen as something separate from the rest of society but rather as a part of the revolutionary process and the idea of a new mode of production. The workers in the vanguard of ALCASA regard themselves as militants in the service of the revolution. A very concrete example is the fact that they have formed a reserve of workers who have received military training and can be called up if it is necessary to defend the country against foreign intervention.

This coherent view is a very radical conclusion because it rejects the idea of cooperatives that make the workers individual owners of the plant and in effect maintains competition and capitalist relations.

It is clear that what we are dealing with here is a case of workers’ control, in which the workforce exercises decisive influence in the key decisions. However, it is necessary to point out that workers control at ALCASA is still at an embryonic stage. There are still important decisions that are not under the democratic control of the workers and their representatives. For example the executive board is still not elected by the workers but appointed by the president from above. When the president is an enthusiastic supporter of workers’ control, as is the case now with Carlos Lánz, the people nominated to the executive board will obviously also be militants of the left. But this is an unstable situation that cannot offer a real solution. Above all the workers need to trust in their own forces and elect their representatives at all levels from below with the right of recall.

That workers’ control is still not fully developed is even admitted by the directors at ALCASA. The posters decorating the walls around the hall state, “Co-management – towards workers’ control”. The management have also put forward a programme where there are different phases in the elaboration of workers’ control.

What is crucial is that the workers continue and extend the movement from below: the elections of spokesmen, the holding of rank-and-file-assemblies, the political and ideological education of the workforce, the strengthening of the trade union as an organ of struggle, etc.

If this is done and if the movement from below at ALCASA continues and concentrates and expands the elements of workers’ control, this will have enormous repercussions in the Venezuelan workers’ movement as a whole. ALCASA is, and could to an even greater extent be, an example to follow. Already now, some of the most advanced workers’ activists at VENALUM, another nearby aluminium plant, are discussing and advocating the introduction of a similar system of workers’ control.

In a broader context it is clear that this experience of workers’ control is giving a new impulse to the revolutionary process. The working class is now entering the arena of struggle with all its mighty force. All activists of the world labour movement must follow these events carefully and draw the necessary conclusions from them. 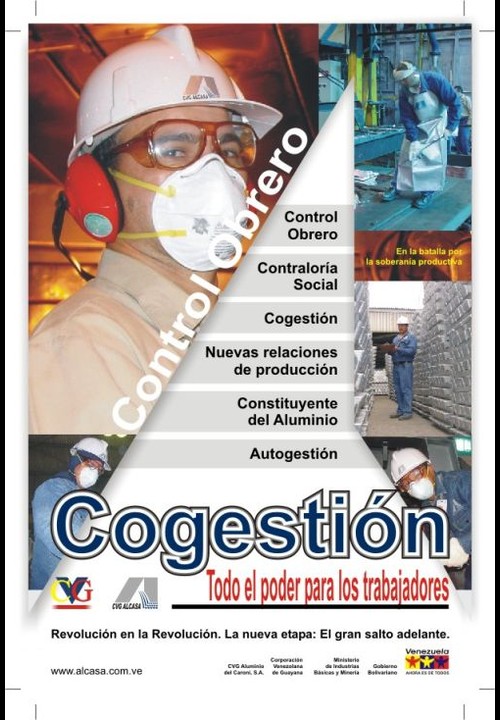