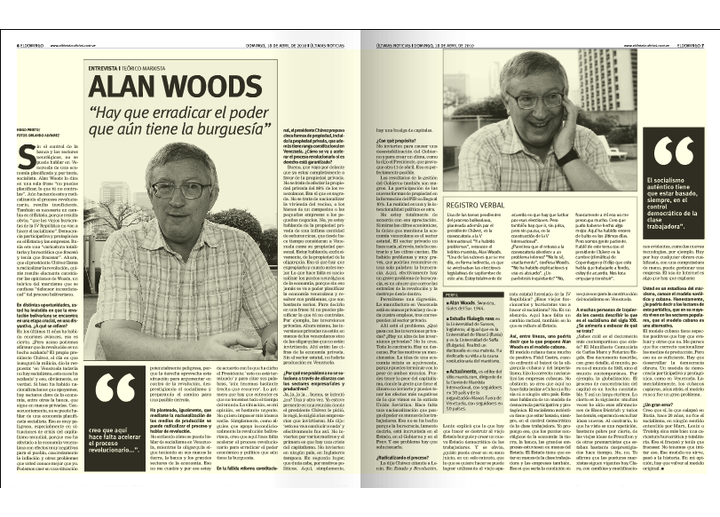 We republish here an interview with Alan Woods by the Venezuelan daily newspaper, Ultimas Noticias, published in its Sunday edition, which has a print run of around 300,000. Alan insists that the revolution is in danger and what is required is to expropriate the oligarchy.

Without the control of the banks and key sectors of the economy, one cannot talk in Venezuela of a planned, and therefore socialist, economy. Alan Woods sums it up in one sentence, “you cannot plan what you don’t control”. Even doing that and radicalising the revolutionary process is not enough. A change in the state is also needed, because it is obvious “that the old bureaucrats of the IV Republic will not carry out socialism”. Participative and protagonist democracy in the state and the companies. Russia was a “totalitarian and bureaucratic caricature which failed and was bound to fail”.

Now that president Chávez has called for a radicalisation of the revolution, it might be useful to consider the opinions of Woods, a Marxist theoretician who confesses being an “unconditional supporter” of the Bolivarian process.

On several occasions you have insisted that the Bolivarian revolution is at a crucial stage, at a crossroads. What do you mean?

In the last 11 years there have been many advances, that is true. But, can we say that the revolution has been completed? President Chavez himself, on the day when he inaugurated the militia, gave the answer: “in Venezuela there is no socialism yet, this is not finished”, and that is obviously true. Although there have been nationalizations, which we support, there are key sectors of the economy, the banks amongst others, which are still in private hands. Therefore, we cannot talk of a planned socialist economy. This is very dangerous, particularly in a situation of world crisis of capitalism, which has affected the Venezuelan economy with very negative consequences for the people, particularly inflation and other problems that you know better than me. We could fall into a potentially dangerous situation, because the right wing is taking advantage of this situation to argue against the revolution, discrediting socialism and preparing the way for a possible defeat. 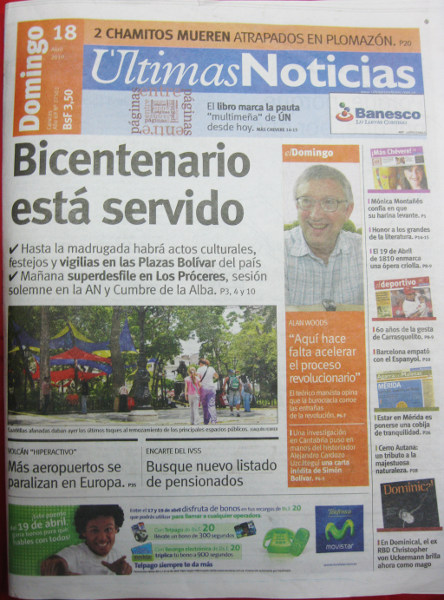 I cannot understand how one can talk of socialism in Venezuela, while the oligarchy still owns the land, the banks and big sectors of the economy. This does not make sense and for this reason I agree with what the President has said: “this has not finished” and to quote his words, “there is still a lot to do”. The first thing we need to understand is that we do not have all the time in the world. The situation, in my opinion, is very urgent. I do not want to impose my ideas on anyone. Simply, speaking as someone who unconditionally supports the Bolivarian revolution, I believe that the revolutionary process must be accelerated so that the political and economic power that the bourgeoisie still has can be eradicated.

In the failed constitutional reform, President Chavez proposed five forms of property, including private property, which in Venezuela has a constitutional status. How can the revolutionary process be accelerated if this right is guaranteed?

I am talking exclusively about the property of the oligarchy. That should be expropriated and the sooner the better. What is needed is the nationalisation of the key sectors of the economy, because without that you will never be able to plan the Venezuelan economy and solve its problems, which are very serious. To put it in one sentence: you cannot plan what you don’t control. For instance, private investment. Right now, private investment is not in the hands of the Venezuelans, but in those of the oligarchy which is not investing. You can see the figures for the private sector. Without the state sector there would be no production in Venezuela.

Why can this problem not be solved through an alliance with business and productive sectors?

Ha, ha, ha, ha … well, that has been tried over and over again, no?. I was present at a meeting where President Chavez asked, begged, and demanded from the employers that they should invest. I said to myself: “this is not going to lead anywhere”, and that was the case. They do not invest for different reasons and the first one is that there is a crisis of capitalism. They are not investing anywhere, in Britain they are not investing. Secondly, there is no doubt about it, it is for political reasons. What we have here, clearly, is a strike of capital.

They do not invest in order to destabilize the government and to create a climate, as the President said, that can provoke another April 11. That is completely possible.

The results of the government are also limited. The new forms of property do not represent more than 10% GDP . There is a gap between reality and political intentions.

I do not fully agree with this appraisal. If you look at the economic figures, the only thing that keeps the Venezuelan economy going is the state sector. The private sector is not doing anything, on the contrary, and the figures are clear. There have been problems, and very serious problems at that, which could be summarized in one word: bureaucracy. Here, clearly, there is a serious problem of bureaucracy, which is a cancer which is eating at the revolution from within and which destroys it from the inside.

Allow me a digression. Manufacturing in Venezuela is in private hands and three out of every four jobs are in the private sector.

Therein lays the problem. What is happening with private investments? Is there an increase in private investment? I don’t think so. On the contrary, there has been a drop. For the reasons I have already mentioned. The idea of a mixed economy is wrong, because you can end up with the worst of both worlds. You can have the worst of capitalism, where the people who have the money do not invest, and you can have the worst effects of what we saw in the former Soviet Union. What is needed is a nationalisation which puts power in the hands of the workers. This has not been done because the bureaucracy, and I regret having to say this, is embedded within the State, the government and in the PSUV. And that problem needs to be dealt with.

Chavez said it quoting Lenin. In State and Revolution, Lenin explained that what needs to be done is to destroy the old bourgeois state and create a new democratic workers’ state. It is obvious, what sane person can believe, even for a minute, that what we want to do can be achieved using the old state apparatus inherited from the IV Republic? Are these old civil servants and bureaucrats going to implement socialism? No. This is absurd. What is needed is a radical change, also in relation to the State.

The Cuban model has many positive features. Fidel Castro when faced with the boycott of the Cuban oligarchy and imperialism did the right thing: he nationalised the Cuban economy. However, I do not think there is a need here to imitate neither Cuba nor Russia nor any other country. We are talking about a mode of protagonist and participatory democracy. Genuine socialism must be based, always, on the democratic control of the working class. This is what I propose, that the key sectors of the economy, the land, the banks and the big companies, should be put in the hands of the State. The State must be in the hands of the working class as well as the companies. This would be a condition sine qua non for the building of socialism in Venezuela.

Many people on the left find it difficult to describe what socialism of the 21st Century is. Would you like to tell us what it is about in general lines?

Do you know what is the most contemporary document there is? Marx and Engels’ Communist Manifesto. This document describes the world in great detail, but not the world of 1848, but today’s world. For instance, globalisation. The process of concentration of capital is a fact. And there are so many others. The truth is the following: I have listened many times to the statements of Heinz Dieterich and all the others, hoping to hear some new ideas. But on the contrary, what I have seen is a very poor repetition of the old ideas of Proudhon and other pre-Marxists who were discredited long ago. No, no. I state that the Marxist standpoint is still relevant today. Of course, with obvious changes and modifications, new technologies, for instance. Today, any skilled worker with a computer at his hands can manage a company. The use of internet is something that must be exploited.

You are a scholar of Marxism, you know the Soviet and the Cuban model. Honestly, could you tell the readers of this paper, who live in peoples’ neighbourhoods in the main, that the Cuban model is an alternative?

The Cuban model has positive aspects that need to be taken into account, and others that don’t. I consider that it was correct to nationalise the means of production. But that is not enough. Workers democracy must be developed. A model of participatory and protagonist democracy, as in Venezuela. Unfortunately, the Cubans years ago copied the Russian model and that was a serious problem.

I think so, what collapsed in Russia, 20 years ago, was not socialism in any way as understood by Marx, Lenin or Trotsky, but rather a totalitarian and bureaucratic caricature. That failed and it was bound to fail. We mustn’t imitate that model. That model does not work, it has failed. In my opinion we need to go back to the original model.

One of the pending tasks of the Bolivarian process, raised by President Chavez, is the convening of a V International. “There have been problems”, recognizes Marxist theoretician Alan Woods. “One of the reasons I was told, in an indirect way, was that the legislative elections in September were approaching. I fully agree that we must fight for those elections. But at the same time, we must go forward, without rushing into it , but without delay, towards the building of the V International”.

It would seem that the delay in its convening is the result of internal problems. “I do not know”, confesses Woods. “There have been no explanations and that is absurd”. A worrying parenthesis? “No, frankly, I am not too worried by this. I think it could have been done better. In the last few days there have been gross mistakes. But we are patient. I spoke about this matter with president Chavez at the climate summit in Copenhagen, and he said that this should be worked on in depth, and I agreed. It is our task to push it forward and to build it”.