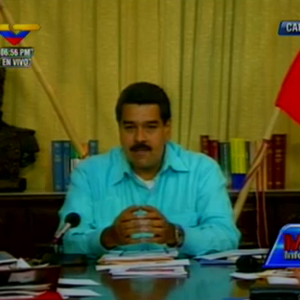 In recent days President Maduro has rightly explained the seriousness of the economic war against the Bolivarian revolution, pointing out that the culprits are the capitalists (Fedecamaras, Consecomercio and Venamcham) and has announced a series of measures to address it.

Statement of the Lucha de Clases - Venezuelan section of the IMT

The situation is serious. Inflation has soared, reaching 54% from January to October of this year and 74% year on year. The shortage index has hit a record high of 22%.

What is behind these figures? Inflation, hoarding, overpricing, speculation, flight of capital, corruption, investment strikes and other problems affecting the workers and the people have their origins in the way the capitalist system itself works.

The aim of the capitalists is not to produce in order to meet the needs of society, but to make profits. Thus, if they can make bigger profits by using dollars from CADIVI at the official exchange rate to import goods and then sell them at a price fixed in bolivars according to the exchange rate of the "parallel" black market dollar, they will. If they can make a profit by getting dollars from CADIVI for importation and then bringing containers full of scrap metal, while selling the dollars in the black market, again, they will.

This is part of the normal functioning of the capitalist system, the nature of the bourgeois class drives them to to get bigger profits at whatever cost, and therefore they cannot allow any regulation of their profit margins. In fact, one of the reasons for the economic war is the revolt of the capitalist class against price and foreign exchange controls.

The other reason is deliberate sabotage for political reasons. Products are removed from the market in an organized manner in order to cause economic distress and so that the Bolivarian people blame the government for the problems. It is exactly the same tactic used by the capitalists and imperialism during the Allende government in Chile in 1971-73, in preparation for the Pinochet coup. Nixon gave instructions to "make the economy scream."

The third reason is the fact that the capitalists do not feel that their investments are safe because of the very existence of the Bolivarian Revolution, which has given the working class confidence in its own strength. That is, a capitalist will not invest in improving productive capacity nor to increase it unless he or she is sure that the workers, encouraged by the government, will not organize a socialist workers’ council demanding better conditions and wages, or demand the expropriation of the company.

The economic warfare is an open battle between the workers and the people on the one hand, who by a large majority have repeatedly expressed support for the Bolivarian revolution and want to go towards socialism, and the oligarchy on the other hand, a parasitical minority of capitalists, landowners, bankers and speculators closely linked to imperialist interests.

Given this situation there is no room for half measures or appeals to the responsibility of the bosses. Capitalist market regulation cannot produce the desired effects either. The experience of the Bolivarian revolution, particularly since the bosses’ lockout and sabotage of the economy in 2002 proves one thing: concessions and appeals to the bourgeoisie have always been met with ever increasing sabotage and conspiracy. The attempt to regulate prices and profits will only increase sabotage, the investment strike and flight of capital.

The only way to respond to this criminal and anti-democratic campaign on the part of the ruling class is with strong measures and an iron fist. The bourgeoisie must be deprived of the economic power they use to ignore the democratic will of the majority.

Socialist workers’ councils, cooperatives and peasant organizations, the communes and the militia must organize People’s Provisioning Juntas (Juntas de Abastecimiento Popular) in every neighborhood and parish. These Juntas should be linked up and coordinated at the municipal, state and national levels through democratically elected and recallable delegates. This will set the basis for the expropriation of the big monopolies, bank and big landed estates, which would allow the democratic planning of the economy to the benefit of the majority of society.

In the words of Ezequiel Zamora, "what has to be sequestered is the property of the rich, because with it they wage war against the people, we shall leave them with nothing but their shirts ".

Neither pacts nor compromise with the capitalists. All power to the working class. Expropriate the oligarchy.