On June 19, the International Longshore and Warehouse Workers Union (ILWU), a militant union of 42,000 members, shut down 29 ports along the West Coast of the United States and Canada, as workers withheld their labor for 8 hours. The strike was organized to demonstrate the labor movement’s solidarity with black lives after the murder of George Floyd at the hands of Minneapolis police, and held on the Juneteenth anniversary of the emancipation of the last chattel slaves in the US in 1865.

As part of the action, a mass demonstration marched through Oakland’s port and downtown, with several thousand in attendance. Boots Riley, a communist rapper and filmmaker, gave a militant speech to the crowd, emphasizing the critical importance of strikes in furthering the movement. As Boots explained:

"Imagine if this wasn’t just a one-day West Coast shutdown. Imagine if we decided to shut down all of the West Coast ports until you do one, two, and three. They would be losing billions of dollars … We need to show them we ain’t asking, we’re telling. We’ll stop the world and make them motherf—ers jump off."

And of course the legendary @BootsRiley was on fire at the Oakland #BlackLivesMatter #JUNETEENTH2020 rally: "our power comes from the fact that we produce wealth and have the ability to withdraw our labor" pic.twitter.com/XqQf7l7TXz

This is precisely what the labor leaders should be explaining! In the midst of a movement with a vacuum of leadership, activists like Boots Riley can come to the fore and play a role in pointing the way forward for the movement. The working class has immense power, and by shutting down production, workers gain more confidence as a result of their class-independent action. Building this sense of confidence is key for the working class as it broadens its struggle against the capitalists.

Successful, militant strikes show that workers can be even more militant—and that only class intransigence gets us anywhere. Such strikes begin to pose the fundamental question: who should control the economic levers of society? After all, the capitalists don’t make the economy run: the workers do, and we should have control! And the fact that this was a political strike—not an economic strike to demand better wages and conditions, but a strike to protest the systemic racism and the brutality of the state—also poses the question: who should run society as a whole?

This question has also been raised in Seattle, with the establishment of the Capitol Hill Occupied Protest (CHOP), albeit in a different manner, and without the concerted participation of organized labor. After tear gassing and shooting rubber bullets at protesters for days on end, Seattle police retreated from the East Precinct building downtown, which was occupied by protestors and declared “Free Capitol Hill” on June 8. The protestors have maintained order within a handful of blocks around the Precinct they occupy, without a police presence. 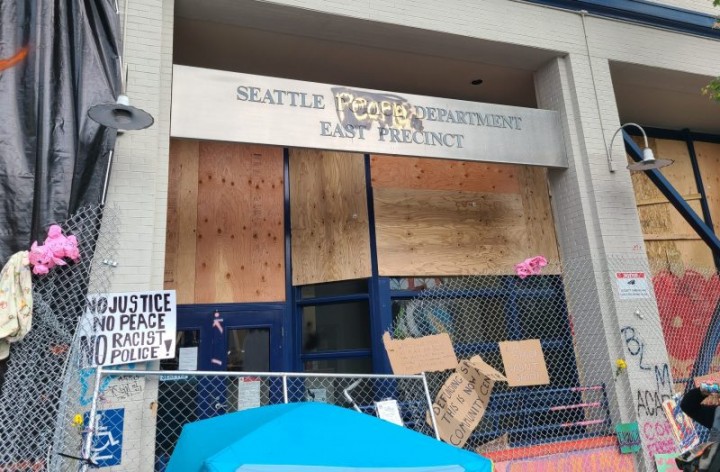 In CHOP, the popular demand to “abolish the police” has been carried out in a small area / Image: own work

The popular demand to “abolish the police” has been carried out in practice in this small area, while protestors convene assemblies to take decisions amongst themselves. This is an embryonic experiment at present, and is all but certain to dissipate in the coming weeks or months. But its symptomatic importance cannot be overemphasized. After all, this inkling of the potential for workers to run things without a capitalist state is taking place in the heart of a major US city—the home base of Amazon and Jeff Bezos.

We must, however, also acknowledge the limits to the “horizontalist” approach of “no leaders” employed by the protestors. This was a crucial weakness of the Occupy movement, which was unable to engage with the broader working class. The key power of the working class lies in its ability to shut down production and lay its hands on the economic levers of society, rather than its power to occupy physical spaces. Without the extension of self-government to other neighborhoods, cities, states, and ultimately, the entire country and the entire planet, isolated zones dependent on the outside world for water, electricity, food, etc. cannot last forever. Sooner or later, either through force or simple exhaustion, the Seattle city government will ensure that “order is restored.”

After weeks of protests in over 2,000 US cities and small towns, the revived Black Lives Matter movement is cooling down in many places. While there is still a lot of energy among the protestors, weeks of constant mobilization inevitably leads to fatigue among a layer. Without serious reforms to make the capitalist class tremble, which would further embolden the movement, workers and youth on the streets end up feeling that the tactics of protesting can only go so far. While powerful and inspiring, such protests do not in and of themselves pose the fundamental question of power. Only the workers, organized as a class, can raise that question. There is immense untapped potential for the movement on the streets to connect with the broader labor movement, which would take the struggle to the next level—but the leaders of organized labor refuse to budge. 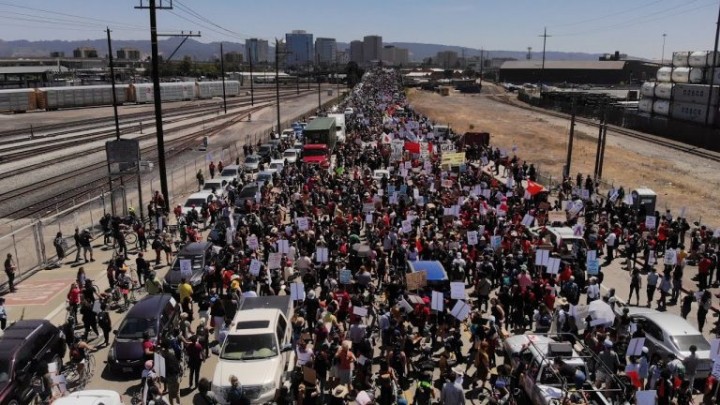 While powerful and inspiring, the protests do not in and of themselves pose the fundamental question of power. Only the broader organized working class can raise that question / Image: own work

The movement’s lack of a coordinated leadership is a clear weakness, as is its lack of a clear program or direction. The tops of the AFL-CIO have kept discretely to the sidelines, and have done nothing to mobilize the federation’s millions members to strike in solidarity, as the ILWU has done. The leadership of the United Auto Workers, for example, called on its membership to commemorate Juneteenth by pausing work for 8 minutes 46 seconds—a symbolic gesture, but one which could nonetheless have represented a step in the direction of further militant strike action to support the movement. But even this was too “radical” for the UAW leadership, which added in bold: “Please do not stop work unless authorized.” In other words, if the boss doesn’t allow you to strike, stay on the assembly line!

The ILWU has shown boldness in leading a one-day political strike, demonstrating in practice the power of the workers to suspend production. Not a single shipping container from China, Japan, South Korea, or the entire Pacific basin can enter the United States without first passing through these unionized workers’ hands! However, if it is to continue to play a strong role it must broaden the struggle. The union has held many “days of action” in the recent past, including a strike against the Iraq War. But it now has the opportunity to lead an extended strike, calling on other unions to do so as well, in order to demonstrate labor’s unconditional solidarity with black people and all of the oppressed. As Boots Riley explained, we can’t stop here: this is only the beginning!

Many workers and youth are fed up with the constant injustices under this system, and are in favor of a revolution. Numerous polls have recorded the dramatic shift in public opinion among millions who have come to reject the capitalist system in recent years. This societal impasse is starkly revealed by the layering effects of the uncontrolled pandemic, the return of Depression-era unemployment and misery, and the blatant racism of this system. In one of the latest surveys, conducted by Harris Poll and Just Capital, 85% of respondents said “the pandemic has exposed underlying structural problems in American society.” And while just 25% of respondents felt that “our current form of capitalism ensures the greater good of society” an even more striking 20% of the population responded that “no form of capitalism can produce the kind of society I want for the next generation.” 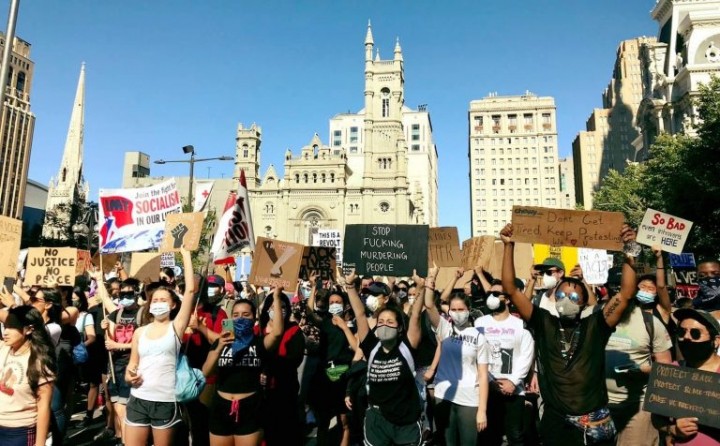 A revolutionary mood is developing in American society. But how can we ensure the coming revolution will lead to fundamental systemic change? / Image: own work

There is clearly a revolutionary mood developing in American society. But how can we ensure the coming revolution will lead to fundamental systemic change and not merely let off enormous quantities of steam? A critical element in this is the leadership, which makes or breaks the course of revolutions. A leadership trained in revolutionary theory, with an experienced understanding of strategy and tactics, can play a key role in ratcheting up the organic confrontation between labor and the capitalists.

Revolutionary situations arise independently of the will of the leadership, and can be sparked by almost any event. But the experience of the last century shows that only a leadership prepared in advance can harness the revolutionary energy of the working class into the actual overthrow of the existing order. A leadership that is unwilling to go beyond the limits of capitalism can only take the workers and youth so far—before ending in eventual and inevitable defeat.

Workers and youth who want to see a successful revolution in our lifetime should study the history of the working class and learn from the successes and defeats of the past. The International Marxist Tendency is building a network of revolutionaries across the US and around the world, actively participating in strikes and struggles, and training a leadership steeled in revolutionary theory and strategy—one up to the task of ending the capitalist system once and for all.