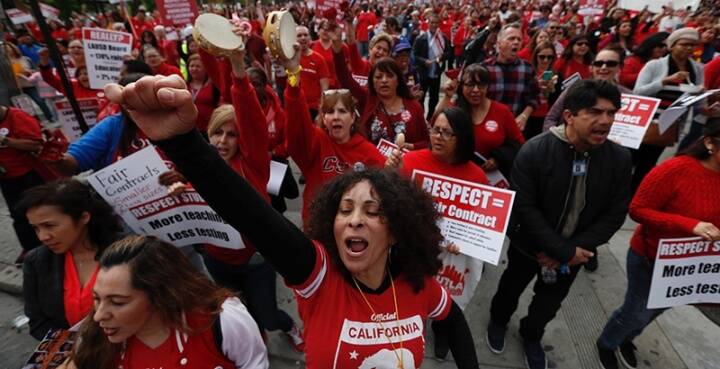 The fightback against the capitalist crisis in education has now spread from West Virginia and Arizona to California. 30,000 teachers in Los Angeles, represented by UTLA, were recently on strike, and in Oakland, nearly 2,400 teachers represented by Oakland Education Association, who have been without a contract since 1 July 2017, are on the verge of strike action.

The mainstream media has done its utmost to portray the teachers as “greedy.” But nothing could be further from the truth. Pay increases are only part of the struggle. The teachers in L.A., for instance, demanded that the district increase their offer of a 6 percent raise to 6.5 percent. For the average L.A. teacher, this 0.5 percent amounts to just $315 a year. This is less than the average of $479 American teachers spend each year out of their own pockets on classroom supplies to ensure their students can learn. And that is what these fights are really about—the future of the youth in a system wracked by cutbacks and austerity. In Oakland, some high schools no longer even have libraries, music, arts, or even basic sports programmes.

This mockery of education is not a uniquely American phenomenon. Teachers and students are struggling against the same austerity the world over. But what does make it particularly glaring is that the United States is the richest nation in history and California alone has an economy and population larger than Canada’s.

Despite the enormous wealth created by American workers, the country’s education system has fallen in a global ranking of health and education from 6th place in 1990 to 27th. California, the wealthiest of all 50 states, ranks 41st in per-pupil spending on education. The state also holds the dubious distinction of being ranked 1st in spending on prisons, many of which operate for profit. And while some police officers in Oakland take home over $300,000, the average teacher in the city makes roughly $50,000. This, in the third-most-expensive metropolitan area in the country. 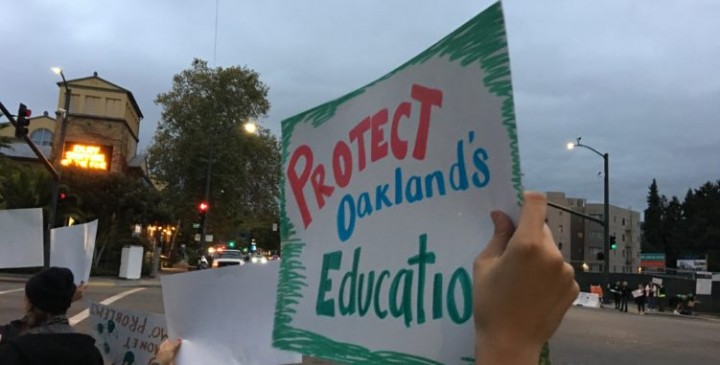 30,000 teachers in Los Angeles were recently on strike, and in Oakland, nearly 2,400 teachers are on the verge of strike action / Image: OEA

Even in San Francisco, where many billion-dollar tech companies are based, the capitalist education system is in decay. After a shambolic few years during which City College lost its accreditation for an extended period, the mostly working-class campus introduced free tuition. With student loan debt and degree mills deterring many, a credible tuition-free college is seen as a life-changing opportunity. We live, however, in an era of counterreforms, not progressive reforms. The free tuition ends in June and San Francisco voters will have to decide whether or not to grant an extension. This is just another example of how impermanent even basic reforms are under capitalism.

This is all part of a broader assault on public education. This war did not start with Donald Trump and Betsy DeVos. Barack Obama and many other Democrats are staunch supporters of charter schools, which operate for private profit by tapping into public funds. The systematic dismantling of California’s public schools has taken place under a supermajority of Democratic Party lawmakers. However, it is not merely a question of funding and resources.

Marx and Engels noted that under capitalism, “all that is holy is profaned.” This is the case in education, where edification is swept aside in the interest of profiteering. Although public education was a conquest of the class struggle, such a system was also necessary for capitalism in its phase of historical ascent. The core function of mass education under capitalism is to produce workers who can generate profits for the capitalists—not to provide people with a well-rounded education that can allow them to reach their full potential. And just as roads and infrastructure are required by the capitalists to distribute and exchange their commodities, far better if these are paid for by working-class taxpayers, as this means more profits for private corporations.

For a time, particularly after World War II, the capitalists required large numbers of skilled workers to compete with the rest of the world—including the highly educated workforce of the Soviet Union. Today, however, capitalism is in decay and so too is its education system. As the need for specialised workers shrinks with every sluggish recovery, and as the low-wage service sector expands ever further, the social gains of the past are relentlessly cannibalised for profit. Just as capitalism is confronted by excess productive capacity when it comes to manufacturing, so too is it facing a crisis of overproduction of educated workers it can no longer absorb into the narrow limits of its economy. The only solution, from the capitalists’ perspective, are cuts.

The inspiring strikes of teachers in the so-called “red states” showed the way to fight back against austerity. These teachers realised that limiting their struggle to what was legally allowed by laws written by and for the rich and powerful was not a path to victory. They also defied their own union leadership, which sought to mediate the struggle on behalf of the employers. In the case of California, the teachers and students in struggle also have to confront the entrenched power of the Democrats, who have overseen the attack on public education.

Link the struggles, fight the system! 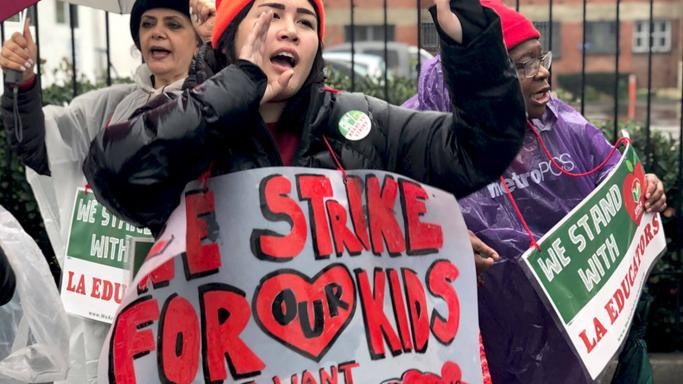 In order for the teachers to win their strike, they need the support of the broader labour movement / Image: UTLA

In order for the teachers to win their strike, they need the support of the broader labour movement. They must make the case that their victory will aid other workers in their battles with their own bosses—while defeat will have the opposite effect. A class-struggle approach to fighting capitalism means recognising that the interests of the workers and the capitalists are irreconcilably opposed, and acting on that reality both in the workplace and in politics.

In the end, L.A. teachers won a commitment to smaller class sizes and “fully staffed” schools with more nurses, counsellors, and librarians to better serve students’ needs. These gains are sure to further embolden other teachers in California and beyond as the class struggle in the US begins to pick up after decades of decline and disorientation. The fresh winds of the class struggle in countries like France and Mexico are also an inspiration to American workers, who have great traditions of struggle and are more connected to the broader world than ever. Once the US working class moves into action to change society, no force on earth will be able to stop it. Watch this space!