The rainy weather and mountain of security guards didn’t deter some 12,000 Minnesota nurses from going on a one-day strike at 14 different hospitals across the Twin Cities on Thursday, June 10th. The Minnesota Nurses Association, which is part of the newly formed National Nurses United, voted overwhelmingly for the strike, after hospital administrators refused to respond to even one of the contract negotiation proposals the nurses put forward. This was the largest nurses’ strike in U.S. history. A solidarity strike by 13,000 California nurses was also planned, but was eventually blocked by a judge in San Francisco. 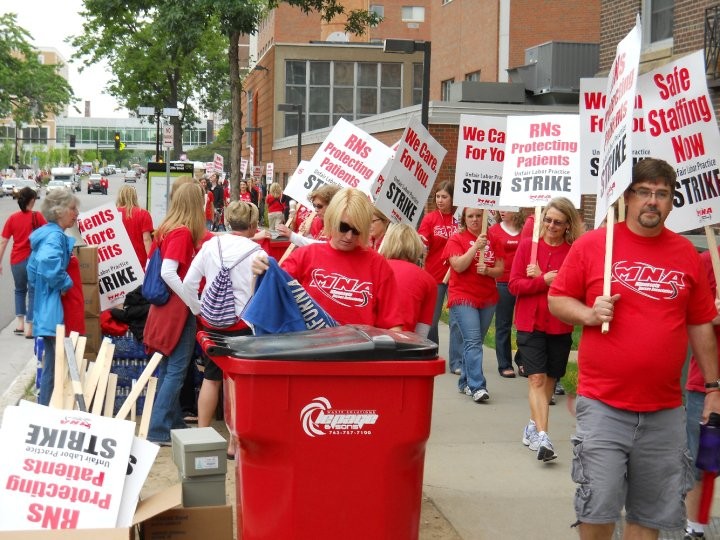 National Nurses United have made headlines and gained 155,000 members since forming just six months ago. They have done this by aggressively putting contentious issues like nurse-to-patient ratio and membership mobilizations at the forefront of their organizing agenda. This is in direct contrast to the American Nurses Association, as well as much of the rest of organized labor, who have struggled with organizing, while becoming ever more comfortable with the bosses. Unfortunately, many have not seemed to understand that there is a direct correlation between the two.

The main issues affecting Twin Cities’ nurses are staffing and pension cuts. As with all workers during this current crisis of capitalism, the bosses are trying to squeeze more productivity out of fewer people. As a result, this leaves hospitals understaffed, with fewer nurses dealing with more patients and more responsibilities, as technological complexity increases and more and more baby boomers enter the system. Despite what many of us were taught in Economics 101, in the real world, when productivity goes up, compensation tends to go down. Despite nurses’ pensions only making up a little over 1% of the hospitals’ yearly revenue, they are asking nurses to accept cuts to their pensions as well as receive little to no pay increase. All this while these hospitals raked in some $700 million in profits in 2009.

We were able to join the nurses on the picket line and express our solidarity as members of the Workers International League and as members of the Communication Workers of America- Newspaper Guild, Local 37002, the union Socialist Appeal is organized under. The mood among the picketers was buoyant and optimistic. Many talked about how they had never been very political before, or even very involved with their union, but this event had changed all that. 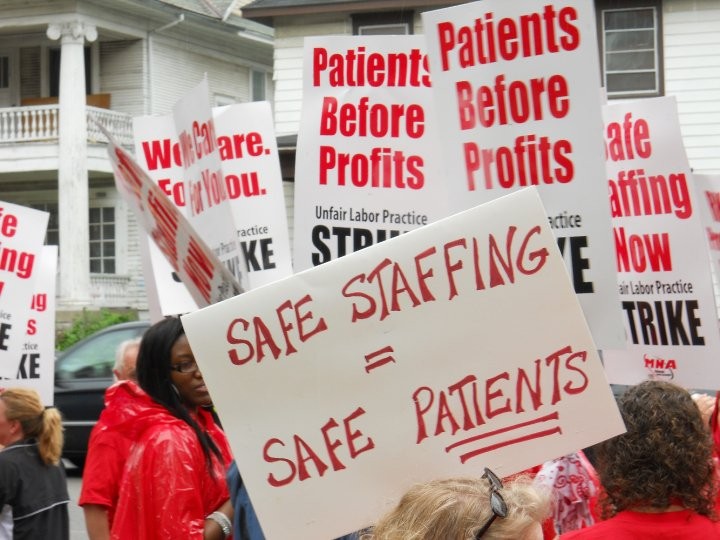 One nurse lamented the fact that the hospital administration was making it impossible for her to provide decent care to her patients, denounced the “hierarchy structure” of the hospital, and called it a “class system.” She went on to tell us that hospitals had become increasingly “corporatized,” and that “profits and health care don’t mix. It’s the nature of the beast. It’s like trying to wear pants as a shirt or a shirt as pants.”

She was by no means a “radical” socialist or even a union activist. These were the words of an ordinary working nurse, saddened that she and her co-workers were being reduced to mere cogs in a corporate profit-making machine. She explained that she didn’t even want to go on strike, that it was a difficult moral decision for her to leave the patients in the hands of a reduced staff of scabs, doctors and administrators, but that the stakes were too high for her and future generations of nurses not to take action.

Even with hospital officials offering thousands of dollars to people for one day’s work, they only were able to fill a fraction of the openings. Ironically, many doctors were forced to do more hands-on work with patients, which is something the nurses have been fighting for. The public was largely supportive, with many honking car horns and raised fists, and one pregnant woman even came outside to grab one of the picket signs and bring it into the hospital in solidarity.

Despite all this, however, hospital officials have shown no desire to negotiate. They locked many nurses out of work the next day and accused them of “abandoning their patients.” One union activist was even physically thrown out by security and ended up having to go to the hospital’s emergency room.

Management understands their interests and are united in trying to defeat the nurses. Organized Labor in the Twin Cities must do the same, and back the MNA in their fight against accepting any and all concessions. The unions should mobilize the public to bring pressure to bear on the hospitals’ board of directors.

The MNA has now voted 84% in favor of an open-ended strike, with negotiations to resume shortly. Nurse Ashley Christensen had this to say about the strike authorization: “The hospitals have put us in a corner. The response is fight or flight. We have to fight.” 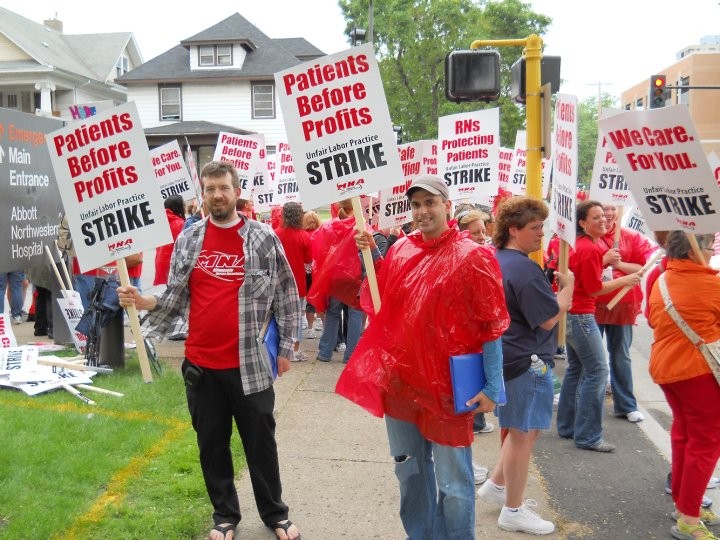 Nonetheless, The pressure is on the MNA leadership to take the threat of an actual indefinite strike off the table until late July, and they have indicated they are open to negotiate on some of their demands. However, the militant mood and broad support for the nurses should embolden the union to resist any and all concessions and to fight for their just demands. A victory in Minnesota can begin to reverse the tide of defeats and concession contracts the labor movement has been hammered with for the past few years, and serve as an example to health care and other workers around the country.

The Workers International League fully support the nurses in their struggle and will continue to report on the situation. Stay tuned to socialistappeal.org for details and contact us if you would like to get involved.