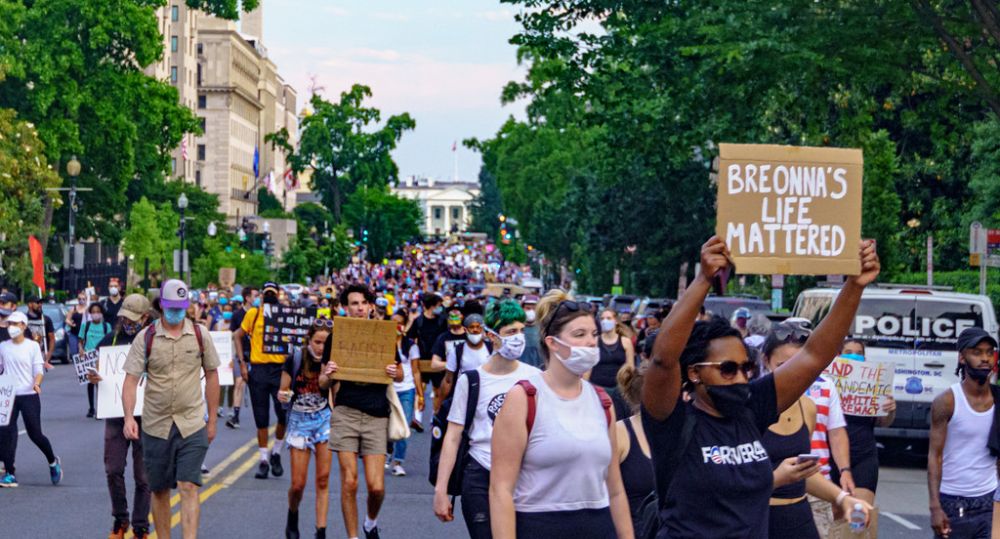 In March of this year, three Louisville police officers broke into Breonna Taylor and her boyfriend’s home after midnight. The cops fired 32 shots in the apartment, killing Taylor in a barrage of bullets. In its recent ruling, the capitalist courts did not indict a single officer for this extrajudicial murder. The announcement was met with outrage and brought tens of thousands back into the streets in at least a dozen cities across the country.

Although six bullets hit Breonna Taylor, the court did not see this as grounds for further investigation. The only “slap on the wrist” offered was a charge of reckless endangerment against one of the cops for shooting through the closed blinds of a glass door and lodging a bullet into the wall of a neighboring home. And though a grand jury made this ruling, these juries are under the control of the district attorney (DA) and the police. As the old saying goes, the DA could get a grand jury to indict a ham sandwich if it wanted it to do so. 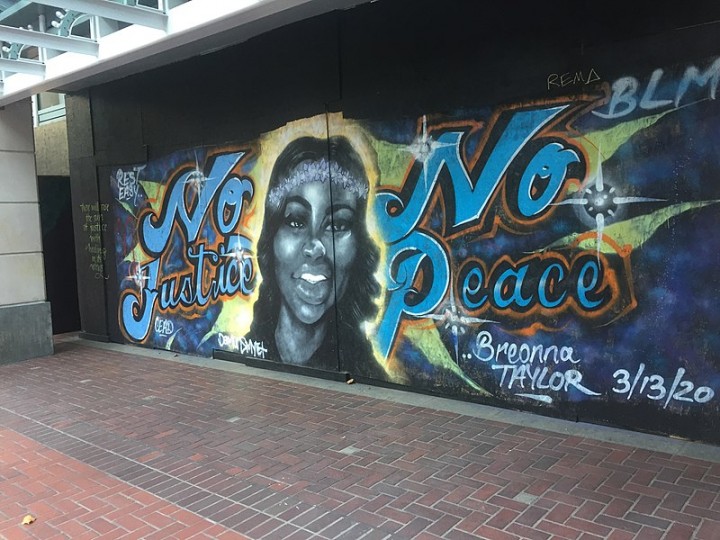 Although six bullets hit Breonna Taylor, the court did not see this as grounds for further investigation into her death / Image: Sarahmirk

The capitalist state claims the police were firing in “self defense,” because they avow that they identified themselves as police and that Breonna Taylor’s boyfriend fired his gun. But how were Breonna and her boyfriend to know that it was the police and not somebody impersonating the law, given that it was late night? Who is to say the police would not have shot anyway? Not long ago in Kenosha, Wisconsin, Jacob Blake was shot seven times in the back—and he had no weapon in his hand.

The police were supposedly executing a search warrant. But there is a glaring class-based double standard when it comes to the law. When a search warrant was executed on Trump’s political fixer Roger Stone, his lawyers were duly informed, and the arrest was carried out in broad daylight in full view of the media. And as is well known, Stone was subsequently pardoned by the president, despite being found guilty of lying to Congress and tampering with witnesses.

The killings of Breonna Taylor, George Floyd, Daniel Prude, and the shooting of Jacob Blake sparked a mass movement of historic proportions across the country. More than 2,000 cities and towns in all fifty states, Washington, DC, and Puerto Rico, saw demonstrations over the past five months. Fully 10% of the US population participated in these historic mobilizations. The Black Lives Matter movement has boldly put the question of institutional racism front and center in US politics. But the key question still to be answered: How can we put an end to systemic racism and killer cops once and for all? 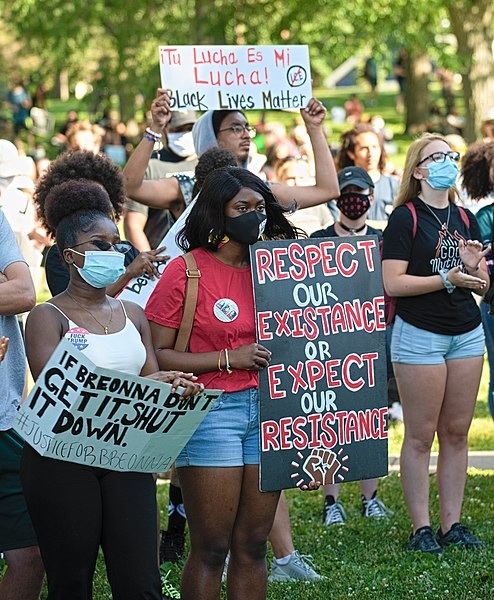 The police killings of Breonna Taylor and George Floyd sparked a mass movement against racism and police brutality across the country and around the world / Image: Fibonacci Blue, Flickr

American capitalism is built on a foundation of racism

Even before the revolution of 1776, the ruling elite in the 13 colonies consciously fomented the concept of “race.” It nurtured white supremacy as a way to justify slavery and keep the working masses divided. The betrayal of Reconstruction after the Civil War led to the imposition of Jim Crow, as racism was heavily leveraged to keep the growing working class turned against each other instead of against the capitalists. All conscious workers know that racism weakens the working class and strengthens the class enemy. If the boss can get white workers to think of themselves as “white” instead of as “workers,” the boss wins. This leads not to privilege in any meaningful sense but to worse conditions for the working class as a whole—white, black, Latino, and Asian—with non-white workers getting the worst of it.

The laws, courts, and prisons are given the Orwellian name of “Criminal Justice System.” This is intended to give the impression that the system exists to “punish criminals” and “serve justice.” But as we have seen with the case of Roger Stone, this system treats the rich one way and the poor a very different way. In reality, the legal system’s primary role is to defend private ownership of the means of production. The wealthiest 10% of the population owns 84% of all the stock market value—this is who the police really “serve and protect.” The “order” that the state enforces is the capitalist order.

We should have no illusions in the judicial system, and we should not expect anything remotely approximating “justice” from it. Even if Trump is kicked out of office and replaced by Biden, nothing fundamental will change. Even though a black president was elected, things got worse for most black people under Obama. Institutional racism will continue as long as the capitalists dominate the government and the economy. 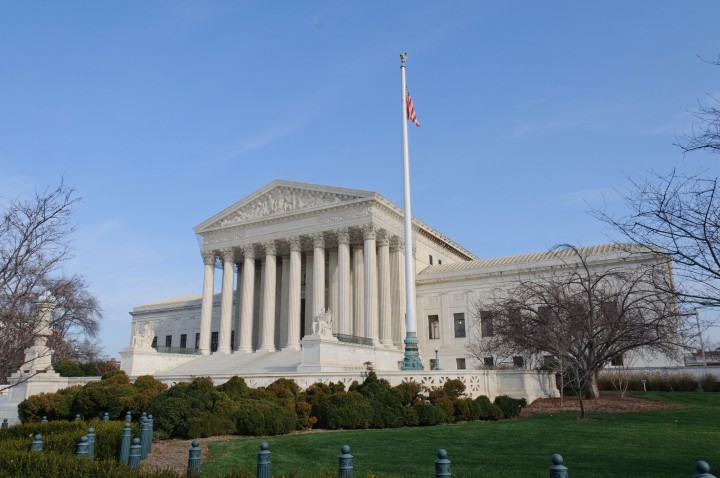 We should have no illusions in the judicial system, and we should not expect justice from it / Image: Richard Gillon, Flickr

Mass mobilizations and expressions of anger are inspiring and necessary. But this energy must be channeled into fundamental revolutionary change. The only real and lasting solution is building a mass working-class socialist party and fighting for a workers’ government. Such a government, armed with a socialist program that specifically targets the question of racism, would move to rip the foundations of racism and inequality out of society.

This would include a mass program of construction to build quality housing, hospitals, mass transit, and other infrastructure, starting in neighborhoods with the highest unemployment. Union hiring halls should be opened in those neighborhoods, and all the workers would be paid union wages. A 20-hour workweek, with no loss in pay, and a minimum wage of $1,000 per week would eliminate unemployment and rapidly raise everyone’s living standards. As part of this transformation of society, the capitalist police would be dismantled. Instead of armed bodies standing above society to defend the interests of capital, democratically elected and controlled self-defense committees made up of workers at the workplaces and in the neighborhoods would defend the majority’s interests.

The working class is multi-racial, and its long-time slogan of solidarity is “an injury to one is an injury to all!” The struggle against police terror—and the racist inequality it upholds—is a class struggle. Only the organized working class has the power to put a stop to the never-ending string of racist murders by police. The leaders of the unions, who represent 14.6 million members across the country, have the ability to mobilize their ranks in a nationwide show of solidarity that would bring the Black Lives Matter protests roaring back to life from coast to coast. Such a bold response by the labor movement could channel the widespread anger at racist police terror into a struggle for a root-and-branch transformation of the system.

A class-struggle policy would explain that the interests of the bosses and the workers are diametrically opposed. The fight against racism must be a fight for higher wages and full employment, safe schools and workplaces, and universal access to quality housing and healthcare for all. If this were done on a mass scale, it would tap into the deep-seated discontent in the depths of society, and it would shake the system from top to bottom.

However, while most of the top labor leaders pay lip service to Black Lives Matter, they have taken no real action. They advise workers to “vote Democrat!”—as if that were a real solution—nevermind that this party presides over some of the most notorious police departments in the country—the same cops who are terrorizing black and brown neighborhoods and gassing and brutalizing protesters. Serious activists in the BLM protests must ask: which way forward? What can we do in addition to attending these demonstrations? 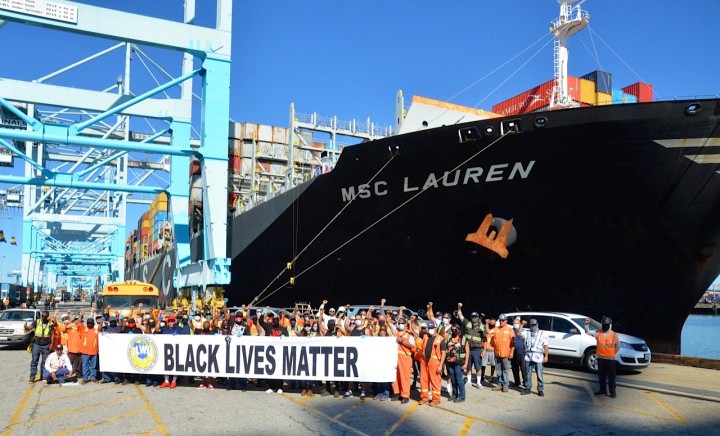 Only the organized working class has the power to put a stop to the never-ending string of racist murders by police / Image: public domain

Fred Hampton was a member of the Black Panthers and a revolutionary who understood the need to link the struggles of black workers with the broader working class. This dangerous idea—dangerous to capitalism—is a big part of why the capitalist state decided to murder him by breaking into his home and firing indiscriminately into his bedroom, just as they did with Breonna Taylor. But while the state can kill an individual, it cannot kill an idea whose time has come! This is how Hampton put it before he was assassinated:

"We got to face some facts. That the masses are poor, that the masses belong to what you call the lower class, and when I talk about the masses, I’m talking about the white masses, I’m talking about the black masses, and the brown masses, and the yellow masses, too. We’ve got to face the fact that some people say you fight fire best with fire, but we say you put fire out best with water. We say you don’t fight racism with racism—we’re gonna fight racism with solidarity. We say you don’t fight capitalism with no black capitalism; you fight capitalism with socialism…"

If you’re angry about racist killer cops and want to help put an end to the system that produces this horror, there is no better place to channel your anger than into revolutionary politics. The working class urgently needs to build a revolutionary tendency, with roots in every major workplace, neighborhood, and layer of the working class. We need a revolutionary program that can win over those who are open to the need to go beyond the limits of the rotten status quo. As the crisis in society intensifies, many more will be open to these ideas. With greater numbers and a presence across the country, the forces of Marxism will be in a position to influence and to reshape the labor movement and to help build a mass working-class socialist party in the not-too-distant future.