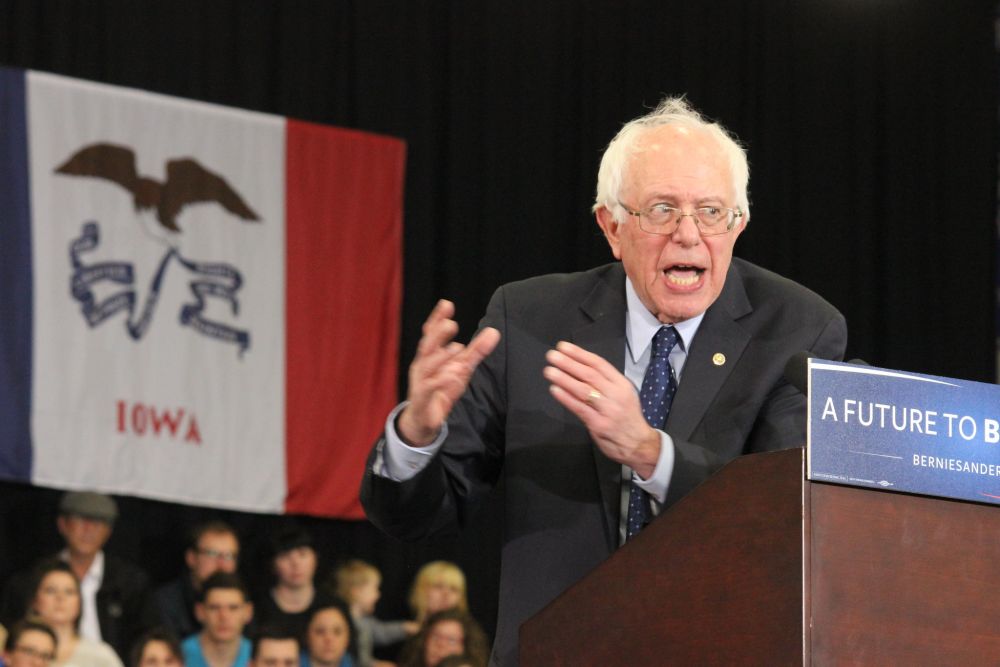 The debacle around the Iowa Caucus has once again highlighted the true nature of the Democratic Party: a party of the US ruling class whose interests are directly opposed to those of the workers and the youth. We will publish a full comment on these events tomorrow. In the meantime, we are publishing an editorial by the US Marxists of Socialist Revolution, originally written on 24 January. Readers may also be interested in this article on the 2016 Iowa Caucus, which remains entirely relevant today.

With the impeachment distraction as a backdrop, the 2020 elections are in full swing. Is it possible Trump could win again? Nothing can be ruled out categorically. Like war, electoral politics is an incredibly complex equation, and much can and will happen between now and November. Suffice it to say that the Democrats are experts at snatching defeat from victory—and may even prefer to scuttle their own party’s chance—treating Trump himself as the “lesser evil”—if they feel they cannot fully control their candidate. 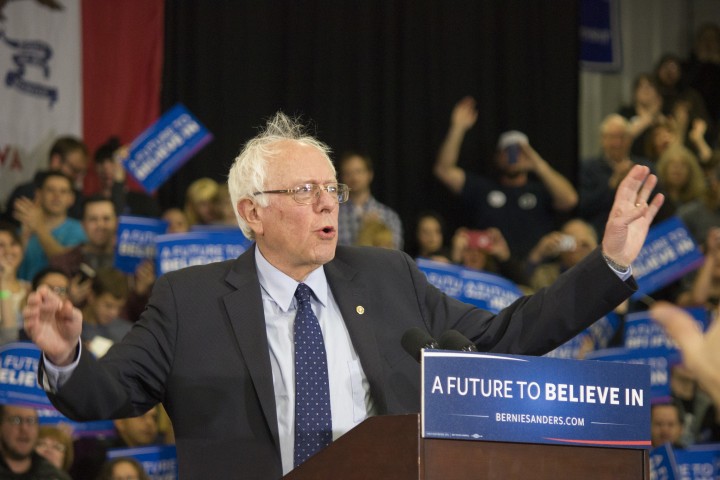 Sanders' recent rise in the polls is a serious cause for concern for the US ruling class / Image: Flickr, Matt Johnson

With the Iowa caucuses and New Hampshire primary just a few weeks away, the latest polls from CNN and the Des Moines Register are cause for concern for the ruling class, which has a lot riding on these elections. For the first time, Bernie Sanders is outpolling establishment favorite, Joe Biden, albeit by a small margin, not only in Iowa and New Hampshire but nationally. He also leads by a large margin over Elizabeth Warren and Pete Buttigieg, and by double-digits over Michael Bloomberg, Amy Klobuchar, and Andrew Yang. Sanders is seen as “the candidate who most agrees with voters on the issues that matter most to them”—so it’s no surprise that polls also show that if the presidential election were held today, he would be almost certain to defeat Trump.

After years of trumpeting the vital importance of these early contests—both in small, rural states with limited Electoral College clout—we can be sure they will downplay their relative weight if Sanders comes out on top. However, victory or even just a strong showing would give him tremendous momentum heading into “Super Tuesday” on March 3, when 14 states, including California, Texas, Virginia, and North Carolina, will decide who to support as the Democratic nominee. If he does well, then also, it could be too late for the Democratic Party establishment to derail him “fair and square.”

Knives out for Bernie

This is why the knives are out for Bernie, with none other than Hillary Clinton leading the charge. Calling his program “baloney,” she claimed in an interview with The Hollywood Reporter that “nobody likes him” and declined to say whether she would endorse and campaign for him if he’s the Democratic nominee. For its part, The New York Times has played the “it’s time for a woman president” identity card by co-endorsing both Warren and Klobuchar—who they see as much safer pairs of hands for their liberal-capitalist agenda.

And while Sanders has vociferously ruled out an independent run, vowing to support the eventual Democratic nominee, Michael Bloomberg is another matter. An independent, well-financed campaign by the billionaire former mayor of New York City may well be the ruling class’s desperate “trump” card if Sanders overcomes the odds the Democratic National Committee has stacked against him. 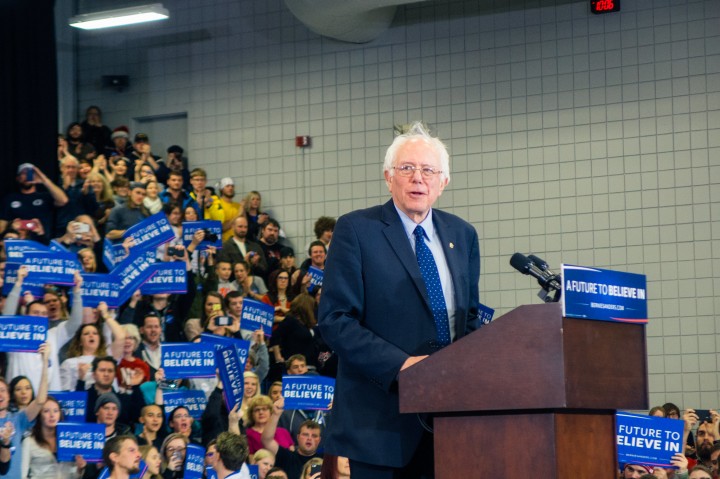 The establishment’s worry over Sanders’s rising popularity reflects their fear and loathing of the workers, youth, and poor who stand behind him / Image: Flickr, Andrew Seaman

The establishment’s worry over Sanders’s rising popularity reflects their fear and loathing of the workers, youth, and poor who stand behind him. If Sanders is catapulted to power on the back of a mass grassroots movement, millions of ordinary Americans would demand even more—or worse yet, begin to take matters into their own hands.

What does all of this signify? First of all, it is proof positive that there is widespread interest in socialism and that a self-described socialist could be elected president of the United States of America. This, in itself, is of tremendous symptomatic importance. Does this, however, justify working within the Democratic Party? Not by a long shot. On the contrary, it highlights the thoroughly reactionary nature of the Democratic Party and the liberal establishment, which are unreformable pillars of support for capitalist rule in the US and around the world.

Reformists of the Jacobin type, desperate to remain caged within capitalist constraints, maintain that support for Sanders as a Democrat represents the extreme limit of what Americans are willing to support. Never mind the breathtakingly rapid changes in consciousness we’ve seen in just the last few years! Marxists, on the other hand, dialectically analyze the genesis and trajectory of social processes, which are not static, but ever-changing. We can confidently predict that millions of American workers can and will move even further to the left on the basis of events and their own experience.

Even many of those currently trying to reform the Democrats from within are inching towards the conclusion that this is like trying to square the circle. As an example, Alexandria Ocasio-Cortez recently candidly commented that the Democratic Party tent is “too big” and that in any other country, she and Joe Biden would not be in the same party. This is absolutely correct! If a mass socialist-labour-workers’ party existed in the US, we can be sure she would be on the reformist right wing of that party instead of in the capitalist Democrats. Then, more recently, she stated that the Democrats are a “center or center-conservative” party and how there currently isn’t a “left” party in this country. Again, she is correct in the sense that the Democrats represent big business, while the working-class majority has no party of its own.

Like Trump’s election, support for Sanders’s is an expression of the simmering anger at the status quo and the search for a solution that goes beyond it. What is lacking is an audacious lead that can harness the growing discontent into revolutionary action to change society, starting with a break with the Democrats and the building of a mass socialist party. People like Sanders and AOC, and publications like Jacobin could play an important part in this if they so desired. To be sure, such a party would almost certainly be reformist from the outset. But it would embolden the working class and provide Marxists with an unprecedented arena in which to argue for our ideas and program.

Unfortunately, many reformist socialists think they can pull a fast one on the Democratic Party—and on the working class. They advocate working within the Democrats—but “only” so as to pull off a so-called “dirty break” later down the line. This is the line of the “Ackerman Thesis” advocated by Jacobin magazine. We should be clear that the only thing “dirty” in this “tactic” is its class collaboration and dishonesty. By building up illusions that there is an “easy” way forward through the Democratic Party, they are muddying the waters and tainting their credibility as “socialists.” Only by standing firm on the principle of class independence today, and by keeping our political banner clean—not “dirty”—will revolutionary socialists be able to attract hundreds and then tens of thousands of workers in the future.

Does this mean that we should have nothing to do with the millions of people who have been radicalised by Sanders and his call for a “political revolution against the billionaire class?” Does it mean we shouldn’t attend his rallies and have friendly discussions with those looking for more radical ideas? Of course not. Only hidebound sectarians would cut themselves off from leftward-moving workers and youth in the name of “revolutionary purity.”

It is normal and natural that people will begin by seeking solutions within, not outside the system, and that they look to familiar parties and politicians, even if they’re not in full agreement with them. We must extend a friendly hand to these layers and engage them in a political discussion, convincing them with facts, figures, and arguments that preparing for the socialist revolution is the only way out of the systemic impasse.

US workers need a workers' party! 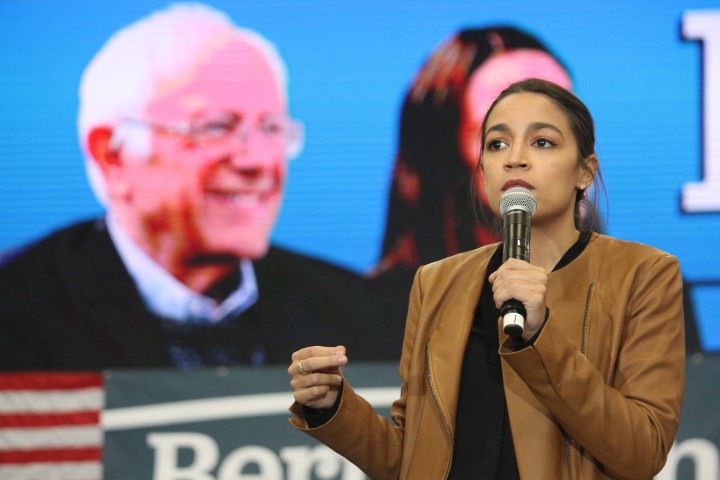 If Sanders or AOC were to break with the Democrats, run as independents, launch a new party, and call on the unions to back them, this would dramatically transform the political landscape / Image: Flickr, Matt Johnson

We must explain that even if Sanders is elected, he would lead a government of crisis. Even if he managed to provide a few cosmetic crumbs through executive orders, he would be sabotaged by his own party and by corporate America. He would be mercilessly savaged in both the conservative and liberal media if he so much as lifted a little finger against the fundamental interests of capital. Whatever his intentions, he would be under fierce pressure from the ruling class to implement its policies—and to save the system from itself.

Under the countervailing pressure of the working class, he could, in theory, go further than he presently intends. The only way to keep his ship from sinking would be to mobilise the working class for revolution and a decisive break with the system and its limits. However, given the pitiful track record of reformists throughout history, this is not at all the most likely scenario. Far more likely, he would cave to the pressure of the capitalists and implement austerity—and deeply discredit the idea of socialism in the process.

If individuals like Sanders or AOC were to break with the Democrats, run as independents, launch a new party, and call on the unions to back them, this would dramatically change the political landscape, and our position to their candidacies would have to be reassessed. Millions support Sanders despite his running as a Democrat—not because he is running on that party’s ballot line. Many others—including many workers who today identify as Republican—would support him if he ran as an independent and worked to build a new party. However, this is, again, not at all the most likely scenario.

As the pressure to support “anyone but Trump” builds, we must remain firm in our convictions and look confidently to the future. Revolutionary Marxists are in no position to meaningfully influence the outcome of the 2020 caucuses, primaries, or general election. We must, therefore, have a sense of proportion as to our tasks in the year ahead. Our task is to patiently explain to workers that the root cause of the problems they face is systemic—whether a Democrat or a Republican sits in the White House. We must never forget that we have a unique and indispensable role to play as the historical memory of the working class. We must not get swept up in the search for shortcuts to building the forces of revolutionary socialism—no such shortcuts exist! The surest way between two points is not always the shortest, and many shortcuts lead directly off a cliff.

Above all, we must have faith in the workers—millions will eventually come searching for revolutionary ideas and a revolutionary organisation. The real question is: will we be ready when that time comes? What we do throughout the course of 2020 will go a long way towards answering that question.