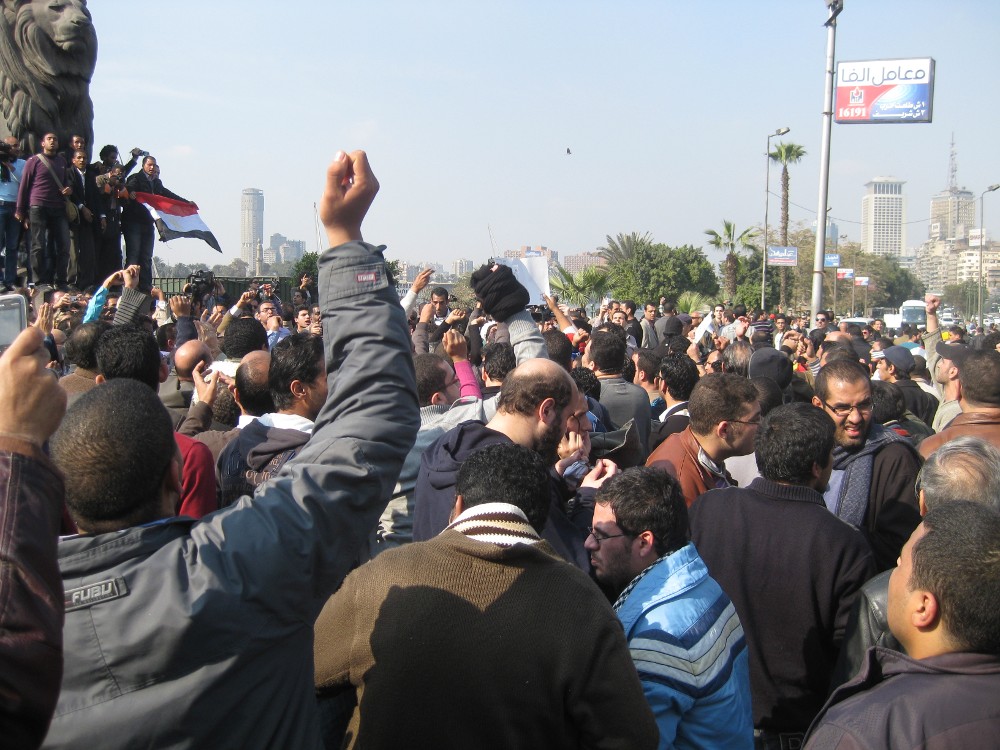 Dramatic events are unfolding in the Middle East. Today (Tuesday) Egypt was rocked by a wave of nationwide demonstrations demanding the end of the Mubarak regime, which has oppressed the people of this proud nation for nearly 30 years. This was the biggest protest movement Egypt has seen for decades. In Cairo and other cities thousands of anti-government protesters demonstrated on the streets and fought with police.

After the overthrow of Tunisia's strongman Zine El Abidine Ben Ali on January 14, observers wondered aloud if the dramatic events in the North African nation could provoke insurrections in other apparently entrenched Arab regimes. Now they have their answer! The revolutionary flames that have swept through the Arab world from Tunisia have reached Egypt.

The first indications of the impact of the Tunisia uprising on the popular consciousness surfaced last week in Egypt when several people set themselves on fire or attempted to do so outside parliament and the prime minister's office. Their actions sought to imitate the example of the young Tunisian vegetable vendor whose self-immolation helped spark the protests that forced Tunisia's authoritarian president to flee the country.

As in Tunisia, the demonstrations in Egypt came against a backdrop of growing anger over widespread poverty and unemployment. Nearly half of Egypt's 80 million people live under or just above the poverty line set by the United Nations at $2 a day. Poor quality education, health care and high unemployment have left large numbers of Egyptians deprived of basic needs.

But the economic discontent is only part of a wider political discontent. There is a deep-seated anger at the injustices, inequalities and corruption of the Mubarak regime. The question is raised of how long the aged dictator will cling to power. Nobody knows whether Mubarak will run again in presidential elections later this year or perhaps position his son to run in his place. But the people of Egypt will accept nothing less than a fundamental change.

The government tried to play down self-immolation attempts, with Prime Minister Ahmed Nazif telling reporters on Monday that those who committed the act were driven by “personal issues”. But nobody believed this. As in Tunisia, the calls for rallies went out on Facebook and Twitter, with 90,000 saying they would attend. On all sides Tunisia was on everyone’s lips. “We want to see change just like in Tunisia,” said Lamia Rayan, 24, one of the protesters.

The call for protests was initiated by The Martyr Facebook page, set up in the name of a young Egyptian man, Khaled Said, who was beaten to death by policemen in the Mediterranean port city of Alexandria last year. His case has become a rallying point for the opposition. Two policemen are currently on trial in connection with his death. Yet by one of those strange ironies with which history is so rich, the protests coincided with a national holiday honouring the country's hated police.

There were remarkable scenes in Cairo today as thousands and thousands poured onto the streets, marching with apparent freedom in three major demonstrations in different parts of the Egyptian capital. Things began peacefully, with police showing unusual restraint. The noisy crowd was joined by cars driving alongside and honking their horns. People cried: “Long Live a Free Tunisia” and waving Tunisian and Egyptian flags while police initially stood on the crowd's periphery. Riot police at first seemed uncertain as to what to do, as each of the marches broke through police cordons.

An eyewitness wrote the following lines:

“I'm downtown outside the offices of the government newspapers where hundreds are chanting ‘Mubarak, your plane is waiting’ and appealing for passers-by to join them, many of whom are taking up the offer.

“Ahmed Ashraf, a 26 year old bank analyst, told me this was his first protest, and that he had been inspired by events in Tunisia. ‘We are the ones controlling the streets today, not the regime,’ he said. ‘I feel so free - things can't stay the same after this.’"

If the police seemed to have no idea what to do, on the other side there also seemed to be little coordination between protest leaders about what to do next. It resembled the commencement of a wrestling match, with each of the two contenders circling warily, eyeing his opponent and trying to guess the next move. They did not have to wait long.

In the past demonstrations were violently dispersed. Now, however, the police had clearly received orders from the government to avoid anything that could provoke a Tunisia-like mass revolt. But such things have a life and a law of their own. As the numbers of demonstrators continued to build up, filling Cairo's main Tahrir square, the security forces got nervous. They suddenly changed tactics and the protest turned violent as police attacked demonstrators with water cannon, batons and of tear gas.

Acrid clouds filled the streets of Cairo. In the past people would have fled in panic from the feared police. But this time things were different. The people stood their ground and fought back. Defiant protesters clashed with riot police in the centre of Cairo. They threw stones and some even climbed on top of an armoured police truck. The Washington Post described the scene:

“Demonstrators attacked the police water canon truck, opening the driver's door and ordering the man out of the vehicle. Some hurled rocks and dragged metal barricades. Officers beat back protesters with batons as they tried to break cordons to join the main downtown demonstrators.

“To the north, in the Mediterranean port city of Alexandria, thousands of protesters also marched in what was dubbed a ‘Day of Rage’ against Mr. Mubarak and calling for an end to the country's grinding poverty.

“[...] The demonstrators in Cairo sang the national anthem and carried banners denouncing Mr. Mubarak and widespread fraud in the country's elections. The organizers said the protests were a ‘day of revolution against torture, poverty, corruption and unemployment’.

“Mothers carrying babies marched and chanted ‘Revolution until Victory!’ while young men parked their cars on the main street and waved signs reading ‘OUT!’ inspired by the Tunisian protestations of ‘DEGAGE!’ this week. Men were seen spraying graffiti reading ‘Down with Hosni Mubarak.’" (Washington Post)

The regime is in a state of panic. Eyewitnesses report that the internet, Twitter and phone calls were all blocked in Egypt, but they are returning intermittently now. The latest reports show that the insurrection is continuing and advancing to new levels. An eyewitness report states:

“As darkness begins to fall, the thousands who have occupied Cairo's central square are pouring forward towards the parliament building, prompting running battles with armed police. The air is filled with teargas and some youths are hurling rocks at the police lines; many of the rocks are being thrown back by security officers.

“A few moments ago a huge charge from demonstrators sent the riot police running, but they have now regrouped and are launching fresh assaults on the front wave of protesters, who are currently picking up the metal barricades installed by police and using them to set up barricades themselves. Large explosions are shaking the square, though it's not clear where they're coming from.”

Reports are spreading of protesters attacking the council of ministers building downtown, while several thousands are said to be marching towards Mubarak's presidential palace in Heliopolis. In Dar El Salaam, a densely-populated neighbourhood in southern Cairo, demonstrators claim they have taken over the police station.

“There's a feeling of intense excitement on the streets here in Shubra, northern Cairo, as the police continue to stand back and allow protesters to pass - but some of the security forces are wearing bullet proof vests, and some fear this is the calm before the storm.

“One former television news presenter told me she hadn't seen anything like this since 1977, when an uprising over bread prices almost brought down the government of President Sadat. But demonstrations remain cut off from each other and it's still too early to say how this will play out.”

It is true that nobody knows how this will end. But one thing is certain. Egypt will never be the same again. The genie is out of the bottle and it cannot be pushed back inside. The masses have had a taste of freedom and they have felt their collective power on the streets. If they possessed an organization and a leadership that was adequate to the task, they could move to take power. But in the absence of leadership and a clear plan and perspective, the situation can go in different ways.

As I write these lines, the fate of the uprising is in the balance. The regime is now on very shaky ground. The hesitation shown by the police at the start of the protest shows that they are not confident of using the apparatus of repression to put down the movement. There will be splits in the regime between those who want to crack down and those who want to make compromises to gain time.

Can the regime drown the uprising in blood? Such an outcome is not impossible, but it would be a victory purchased at a very high price. The hatred and resentment towards the regime would be long-lasting. It would poison the political life of the country and rule out any kind of compromise solution. Mubarak is an old man and cannot last long. His son, who he hopes will replace him, will be completely delegitimized. The economy will decline still further, aggravating the problem of unemployment and poverty. New explosions would follow.

However, that does not seem the most likely variant. The mass movement is gathering strength by the hour. In Alexandria there are reports of old ladies throwing pots and pans on the police from the balconies of their houses. The key to the situation is the powerful Egyptian proletariat, which has organized strike after strike in recent years. Now the workers are on the streets. In Mahala, the scene of the big textile workers’ strikes, there is news of 20,000 on the streets. The police station has been overwhelmed.

The revolutionary people are occupying the central squares and refusing to leave. Every inch has been conquered by the masses and they do not intend to surrender what they have conquered to anyone. Faced with a mass movement on such a scale, the forces of state repression, which before seemed so formidable, have suddenly become vulnerable. In many places the police have been simply swamped by sheer numbers. Their cordons have been broken by the protesters. The faces of the ordinary policemen betray nervousness, and their officers even more so.

There have been many cases of fraternization. A French TV news channel showed pictures of a police officer (I think in Alexandria) being carried shoulder high by demonstrators. They are shouting anti-government slogans, and the police officer is shouting them as well. This little incident says it all. All history shows that once the masses have lost their fear, once an entire people stands up and says “no”, there is no force on earth that can stop them.

Whatever we will read in tomorrow’s newspapers, we may be sure of one thing: the Arab revolution has begun. It will be greeted with every enthusiasm by the workers and youth of the whole world. Let us mobilize in support of our Arab brother and sisters! Demand an immediate end to repression! Break off all relations with the criminal Mubarak regime! Demand full rights for the people of Egypt!