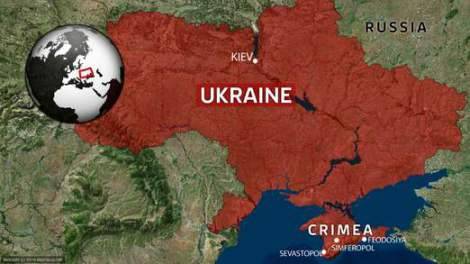 The diplomatic negotiations between Ukraine, Russia, Germany and France have led to a cease-fire agreement which will be difficult to carry out on the ground.   We will return to this agreement and the different imperialist interests involved in a future article.   For the moment we are publishing this article which was written on 2 February, which deals with the military and political situation inside Ukraine itself.

The month of January has been one of the most violent and difficult for the people of the Donbass.

There were thirteen victims in Donetsk last week, twelve dead and twenty wounded in two weeks in Vonovakha. In both attacks buses were targeted in the city centre.

The latest new tragedy is the massacre of Mariupol.   In this port city of close to 500,000 inhabitants in the province of Donetsk, the bombing of a marketplace killed twenty people and injured more than a hundred.

These were not random targets.   Marketplaces, public transport and the disruption of these have become the main targets of the Ukrainian artillery and army along with houses, hospitals, schools and nurseries.

Kiev on the offensive again 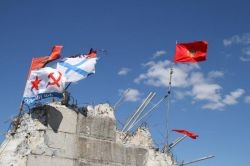 The Kiev government is showing its inability to defeat the insurgents who are ready to sacrifice their lives to defend the independence of their territory.   Now the Ukrainian army has been primarily resorting to bombings and terrorist attacks in residential areas.   President Poroshenko started the year by launching a new offensive against the rebel republics, backed by an additional 100,000 additional soldiers.   He has the full backing in this action of the governments of the United States and the European Union.   Brussels has recently reaffirmed its unilateral position and renewed its sanctions against Russia. 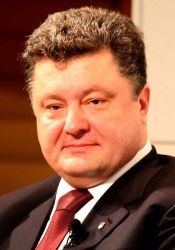 All this did not help much.   The army of the Donbass Republics is moving steadily towards Mariupol, the capture of which would be a veritable humiliation for Poroshenko and his supporters.

In this context of civil war, in the Ukraine we are seeing a real and contradictory process..   In effect, the right-wing forces and the fascists are coming up against the resistance and class struggle.

Thus, in the regions governed by Kiev, the "white terror" continues, often protected and promoted by the state institutions themselves.   For example, at the same time as the President of Ukraine Poroshenko was marching in Paris on 11 January together with the mighty of the world in defence of "freedom of expression", in the Svyatosjinsky region fascist gangs were attacking and destroying the local headquarter of the Communist Party.   Furthermore, at the same time the Kiev parliament has been discussing the outlawing of the Communist Party and the banning of "Communist iedeology" throughout the country.   This shows how far the hyporcrisy of the ruling class can go! 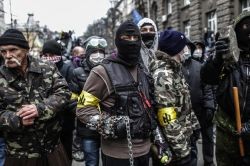 Moreover, on January 1, the Ukranian nationalists organised a big march with torches in the streets of Kiev.   They celebrated the 106th anniversary of the birth , on January 1 1909, of the leader of the so-called Ukranian Insurrectionary Army (UPA), Stepan Bandera.   The latter sided with the nazis during World War II.   He perpetrated, together with the German SS, crimes against his own countrymen and women, Jews for the most part.

The leader of the far-right organization "Svoboda", Oleg Tjagnibok, seized the opportunity to demand that the government should restore to Bandera the title of "Hero of Ukraine" and officially recognise the "Organization of Ukrainian Nationalists"(OUN) he had created.   "Svoboda" was not alone at that demonstration in Kiev. Representatives of "Prayj Sektor" (the Right Sector, a fascist organisation), and of the neo-nazi battalion "Azov" were present in military gear and with nostaligic banners of the UPA and OUN.

The fascists were not happy to simply march on the streets.   On December 15, these units have blocked the humanitarian convoy to the Donbass, where there was clearly a serious threath of a humanitarian disaster.   On December 23, the "Azov" battalion declared their intention to take control of the port of Marioupol.

The situation in the rebel republics 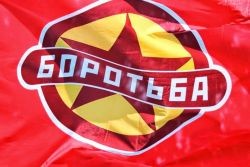 Contradictory processes are also present in the rebel republic.   For example, in early January, the news of the abduction of four activists belonging to Borotba ["The Struggle", a Ukrainian Marxist organisation].   The four activists had in reality been arrested between Christmas and New Year's Eve, by the Vostok Battalion.   A few days later, the four activists, after having been abducted and locked away for two weeks, were finally released and expelled from the Republic of Donetsk.   Since this episode, Borotba has no longer been able to enter the Republics of Donetsk and of Luhansk, as the activists are clearly unwilling to surrender.

The expulsion of the Borotba activists is yet another episode which should lead us to review the perspectives for the republics of the Donbass.   We have always supported the anti-fascist resistance in the rebel republics and we gave great importance to the class content at the root of this resistance.   It is clear, however, that we are now witnessing an attempt to silence the forces of the left in these republics.   Let us remember, for example, the fact that it was impossible for the Communist Party to present a list in the elections on November 2 in Donbass and Luhansk - the reason, according to the authorities, being "procedural problems".

Moreover, the conflict is taking on more and more the character of a purely military conflict, where the political and anti-oligarchical aspect of the struggle is being overshadowed.   In the people's republics, in effect, many battalions function according to their own ambiguous aims, often linked to the most reactionary Russian nationalism.   In such a situation, the military in Donetsk and Luhansk have been acquiring more and more power, whereas the anti-capitalist forces have been more and more sidelined.   This is also shown by the fact that none of the commitments to nationalisation, which were being raised until very recently, have been respected.

The political orientation of the resistance is not at all without importance.   The application of an anti-oligarchic programme and an appeal to the workers of the rest of Ukraine would have a very powerful effect.   This is particularly true in this particular moment when the government crisis in Kiev is worsening.   A Ukrainian defeat in the new military offensive would lead to mass demonstrations.   Major rallies have already taken place over the course of recent days in many regions of Western Ukraine, against the introduction of conscription by the government.   After January 20, only 62% of conscripts responded to the call up!

The economic crisis, austerity and the war can lead to a political radicalisation which could serve to win the working class of the rest of Ukraine.   For instance, a spontaneous strike was organised in January by the workers of the giant Yuzhmasch plant in Dnipropetrovsk.   For months the wages have not been paid.   This is explained by the fact that a large part of the production of high-tech components was previously exported to the Russian market.   Now because of the war exports have been blocked and the factories are standing idle.

Thus, the class struggle continues, and it is here that we find the only force which can completely change the balance of power, the only real movement which can win the struggle against the fascists and their protectors, the oligarchs of all nationalities.   From the beginning we have been defending the idea that the only means by which the anti-Maidan movement can be victorious is by adopting a clear and coherent class position, rather than a nationalist one.

Given the crisis of the Kiev regime, the possibility for the republics of the East to connect to a mass movement of the west could become a reality, provided that they abandon their present nationalist stance.   Therefore, we must not allow those militant forces who are in open opposition to capitalism inside the republics, and who defend a clear anti-oligarchic programme and fight for a socialist orientation of the struggle, to be stifled.   Taking bold measures of expropriating the capitalists would inspire in the rest of Ukraine a mass movement against the austerity measures imposed by the IMF and against the war.