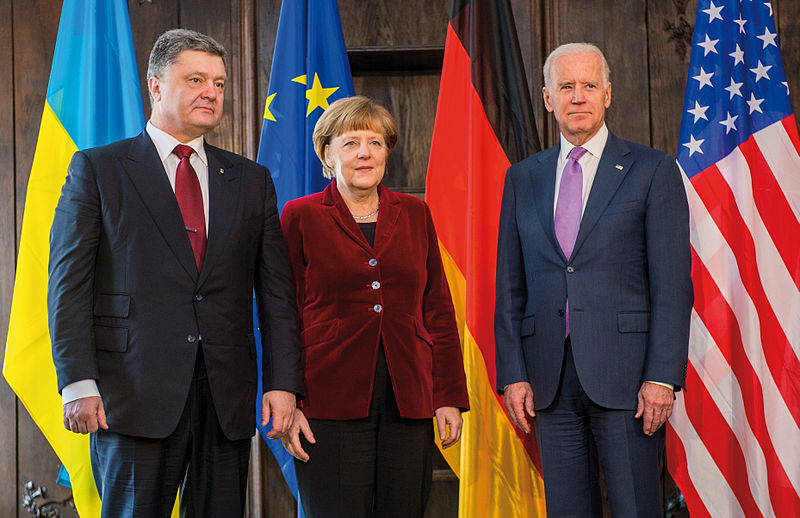 On 19 May, Ukrainian opposition MP Andriy Derkach called a press conference to release a series of recordings of phone conversations in 2016 between Ukrainian President Petro Poroshenko and then-US Vice President Joe Biden, along with US Secretary of State John Kerry. The recordings reveal several aspects of the relationship between the administrations of Poroshenko and Obama at the time; and furthermore, the influence that US imperialism had on the actions of the Poroshenko administration from 2014 to 2019. Just a couple of months later, Derkach revealed recordings between Poroshenko and Russian President Vladimir Putin. Although these discussions were much shorter, they revealed a certain familiarity and understanding between two presidents, who like to appear as mortal enemies to their respective supporters.

While there were reasonable grounds for scepticism, the authenticity of the tapes has essentially been confirmed. No serious arguments have been made that these were not the voices of Poroshenko, Biden, Kerry and Putin. Only Poroshenko’s camp tried to suggest the tapes were fakes. The Biden camp only pointed out how convenient they were for the Trump presidential campaign, which confirms their authenticity more than denying it.

The calls reveal a lot of things already known, or very likely, based on the actions of Poroshenko at the time, and how US imperialism functioned during the Obama presidency. The first tape concerns the 2014 appointment of Biden’s son, Hunter to the board of Burisma Holdings – a natural gas company owned by oligarchs tied to the previous regime – a position from which he departed in 2019.

On its own, Hunter’s appointment (just after he had been discharged from the Navy for drug use) may not seem very significant. But given that Hunter had no prior experience in the energy sector, it is clear that his hiring was an attempt by the Ukrainian oligarchs to gain economically by using the political influence of his father and members of the Obama administration. 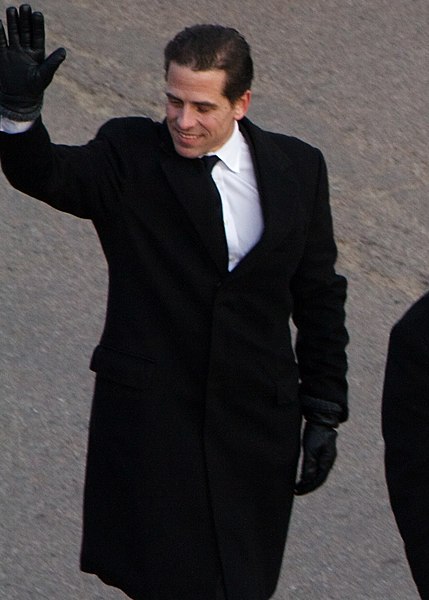 Hunter Biden's $50,000 a month salary at Burisma and Joe Biden's pressure on Ukraine to sack a general prosecutor evince the collusion between the Ukrainian oligarchy and imperialism / Image: acaben

This is part of a trend in which members of the Ukrainian ruling class try to garner influence among US elites. In another example, billionaire oligarch and ex-president Leonid Kuchma’s former son-in-law, Viktor Pinchuk, famously gave between $10-25m USD to the Clinton Foundation between 1994 and 2005, and had dinner at the Clintons’ home. In 2015, he also reportedly paid a $150,000 “honorarium” to the Trump Foundation in return for Donald Trump making a 20-minute videocall appearance at his Yalta European Strategy conference in Kyiv.

In the recordings, Poroshenko tells a satisfied Biden that the Ukrainian general prosecutor Viktor Shokin has been dismissed, at a time when Burisma was under investigation by said prosecutor. Biden admitted in a 2018 interview that he had threatened to withhold $1bn in loan guarantees in 2015 if Shokin was not removed. All of this reveals how the capitalist state, no matter how ostensibly democratic, far from being an impartial arbiter in society, is tied by a thousand threads to the ruling class, whose bidding it ultimately serves. That is the secret behind the £50,000 a month that Hunter Biden received from “natural resource extraction” in an impoverished country. Ironically, Burisma is owned by an oligarch tied to former president Viktor Yanukovych, so part of Poroshenko's service to the US was covering up the dealings of the government he replaced following a coup!

This close relationship is not just governed by personalities, but by the material interests of US capital in Ukraine. The Ukrainian ruling class has to deal with US capital in one way or another, and current President Volodymyr Zelensky remains very accommodating to its interests. Absurdly, the action that launched impeachment proceedings against Trump was putting pressure on Ukraine to perform an actual corruption investigation, rather than anything reprehensible that Trump has done. This again goes to show that the US ruling class is not opposed to Donald Trump for his corrupt reactionary nature, but because he doesn’t bother to conceal the truth – that US capitalism is rotten to the core.

The consequence for Ukrainian politics was the appointment of a prosecutor general in a nominally sovereign nation, based on the whims of politicians in another country. Biden is not shown in the recordings explicitly ordering the resignation of the prosecutor, but it is clear that Poroshenko proceeded with the move with appeasing Biden in mind. This represents the real effect of “democratic influence” from Washington: the submission of local democracy to the interests of Western capital.

The other main issue in the discussion was IMF loans. Biden promises Poroshenko another $1bn IMF loan (which was received later), if certain “reform measures” were imposed. Derkach speculates – reasonably – that this was used to fund the Ukrainian army, for which Poroshenko's company was involved in provisioning supplies; and before last year's election, was found to be making huge returns on this business. Paying back these loans is left to future generations of Ukrainians.

The IMF, as it has done with countless other poor debtor nations in the past, demanded harsh austerity measures on the population. For Ukraine, this implies cutting subsidies for heating gas, cutting pension benefits and the privatisation of farmland and the healthcare system. To show his benefactors how little he thinks of his countrymen, Poroshenko bragged that he increased Ukrainian gas prices by 100 percent, even more than the 75 percent the IMF was demanding. Richard Nixon might gasp at the cynicism Poroshenko displays when he doesn’t know he is being recorded.

The IMF is a brutal institution, which represents imperialism under the guise of an impartial and benevolent international organisation. It serves as an instrument to impose the will of mainly US finance capital. Its loans allow the extraction of resources from debtor nations, while the programmes attached to them lead to increased privatisations, opening up more markets to be taken over by the capitalists of larger imperialist powers.

Ukraine is now one of the most indebted countries in the world. Ukrainian citizens pay some of the highest prices for gas in Europe, while having the lowest wages. Laws privatising the medical system and allowing the foreign land have been passed in parliament this year.

Even though these tapes concern Poroshenko, the Zelensky government is continuing these policies since they came into power, as they promised. The imperialist influence over the Ukrainian state is so great that any new bourgois party coming into government has to deal with the wishes of Washington and the IMF as they make their domestic policies. The immense popularity of the Zelensky government due to its reduced nationalist rhetoric has arguably made the implementation of these measures somewhat easier, as the workers’ anger towards the government was temporarily dulled.

Just a month after the revelation of the Biden tapes, Derkach released a conversation between Poroshenko with Vladimir Putin, where they cynically congratulated each other on international workers’ day (May Day) in 2015. Poroshenko was not only on cordial terms with Putin, but reassured him that matters in Ukraine were “under control”.

Poroshenko and co. have for the past half decade shouted at the top of their lungs that Ukraine is in a conventional war with Russia. However, it is evident that the ruling class of Ukraine is lying to their own population about the nature of the conflict, and how a majority of those fighting on the other side were Ukrainian citizens only a few years ago. This becomes clear when you consider that Poroshenko maintained a confectionary factory in the Russian city of Lipetsk until 2017. The discussion between the two leaders clearly shows the level of cynicism on both sides over this so-called “Ukraine-Russia” war.

Though they are far from equals in terms of power and influence, their friendly exchange shows that both Poroshenko and Putin fundamentally belong to the same system. They both represent the affairs of their respective capitalist backers, while ordinary Ukrainians and Russians suffer the consequences in the form of bloodshed, poverty and misery. A critical aspect of the future revolutionary struggle in the ex-USSR countries will be the general population realising just how little their ruling classes think of them.

The Zelensky administration called Poroshenko in for questioning in June, but has since taken its foot off the pedal. As we wrote during last year's elections, although Zelensky represented some changes in rhetoric (notably retreating on some of Poroshenko’s divisive nationalism), he openly followed Poroshenko’s domestic programme of austerity and continuation of the civil war, along with a foreign policy of bowing to Western imperialism while keeping a cordial back-channel with Russia. This is where the large part of the Ukrainian oligarchy find themselves, as many are now tied to Western capital in their current and future business interests.

This is illustrated in the laws allowing for the privatisation of land by foreign entities last summer, the taking on of further IMF loans, and the recent trade agreement with the UK, in which Ukraine bought UK-made navy boats with UK loans. And as Biden colluded with Poroshenko to cover his dealings with Burisma Holdings in 2016, Trump pressured Zelensky to investigate by threatening to reduce military support in 2019. Faces change, but the reactionary role of US imperialism and the Ukrainian oligarchy stays the same.

The great Marxist Ted Grant wrote the following in the aftermath of the collapse of the USSR in Russia: From Revolution to Counter-Revolution:

“...the break-up of the USSR gave rise to acute economic problems given the extreme interdependence of all the Republics after decades of centralised planned economy. As a result, both centrifugal and centripetal tendencies are at work. Only the Ukraine has a relative economic basis for independence, but even there, the Ukrainian economy is still tied by a thousand links to that of its powerful neighbour.”

While the Ukrainian state and the oligarchy maintained a relative degree of autonomy for the first two decades of independence, the pressure of imperialism and the effects of the global economic crisis have made them more dependent on foreign capital. However, the increasing influence of Western imperialism behind the Orange Revolution and Euromaidan strengthened the influence of the Kiev government on one hand, and led to the takeover of Crimea by Russia and civil war in the Donbass on the other.

But while imperialism can provide Kiev with weapons and partial diplomatic legitimacy, it will not put food on people’s tables. And as deteriorating conditions in imperialist countries provide conditions for revolt and revolution, this can only serve to finally shatter the illusions in capitalism of the working class in the client states. Already, we see the rise of class struggle with recent miners’ strikes throughout Ukraine.

These tapes are further proof of the rottenness of all bourgeois leaders, and the contempt with which they regard ordinary people. Poroshenko, Zelensky, Putin, Biden and Trump are all agents of the same system, and endlessly collude with one another behind the workers’ backs to maintain their own narrow interests. The working class throughout the former USSR must rediscover its revolutionary traditions, break the power of the oligarchs and their imperialist masters and take their destinies into their own hands, alongside the workers of the entire world.