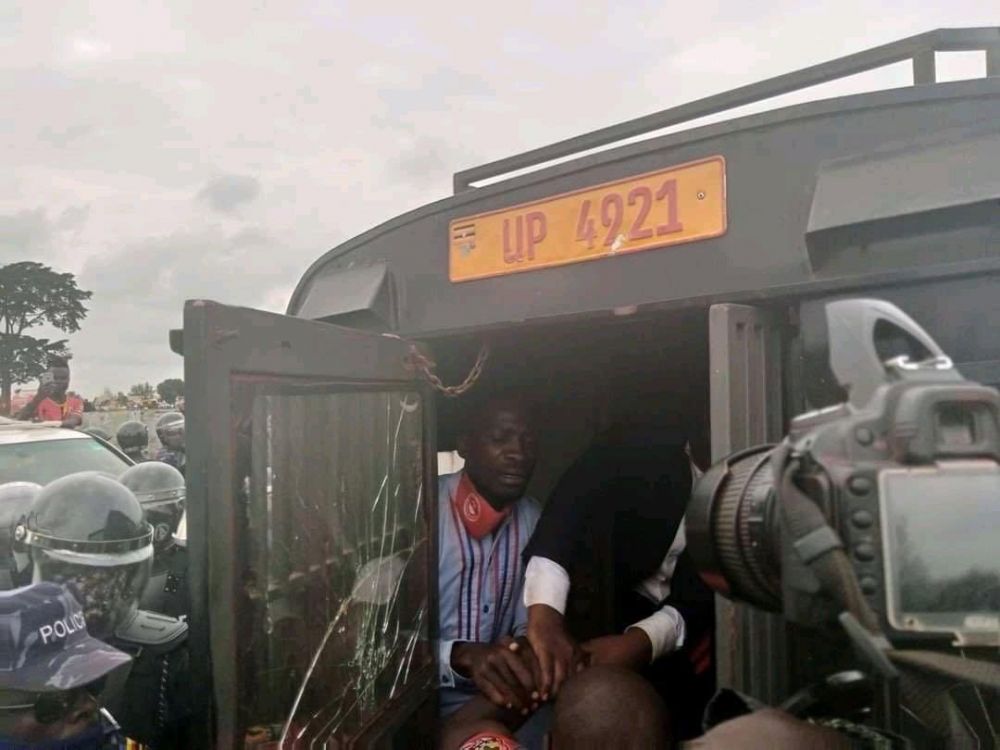 On Wednesday 18 November, Ugandan opposition politician Bobi Wine was violently arrested once again in the Luuka district. Various reports speak of violence towards him. One vehicle branded with incumbent President Museveni's campaign brutally ploughed into a group of bystanders in Kampala that same afternoon, leaving several people dead – although the number of casualties is still unknown. It is reported that the car was being stoned shortly before the attack. Another presidential candidate, Patrick Amuriat has also been arrested. Other candidates are pausing campaigning until Wine is released.

Subsequently, supporters of Wine blocked roads in Kampala, protesting the arrest, and some have consequently been shot and killed in the street. While the media claims only seven have died, the mood on the streets suggests the death toll is far higher. Billboards of the president have been torn down:

The claim that Wine was in violation of rules to contain the coronavirus is hypocritical to put it mildly when large processions in support of the ruling NRM (National Resistance Movement) and president Museveni are not treated in the same way. What we are really seeing is a violent attempt by Musevini to maintain power in the face of rising opposition.

2021 will mark 35 years of Yoweri Musevini’s rule. In that time, he has enforced a harsh regime that maintains power through fierce police and military brutality against ordinary Ugandans. At every election, MPs from the ruling party urge for calm, and warn against any disruptions that could drag the country back towards civil war. But appeals for peace mean little coming from the NRM. Protests and mass gatherings are routinely broken up with rubber bullets and tear gas. In reality, this is not a warning, but a thinly veiled threat to the masses, showing that the ruling class is willing to drag the whole country down in chaos and civil war if anyone dares to oppose its rule. In some periods, such threats can have the effect of holding back the class struggle temporarily. But everything has a limit.

The protests against police brutality in Nigeria have found a huge echo in Uganda, which like Nigeria has a young and energetic population. More than 75 percent of Uganda's population is below the age of 30. In fact, only 1.9 percent of the population is above the age of 65, placing Museveni (at 76) in an even-smaller minority. With unemployment and poverty rife, the youth have nothing to look forward to in life under capitalism.

Museveni is completely detached from this layer of society. Last year he proudly pronounced that “I have never stolen and I am rich”. Half of that sentence is absolutely right and the other is a total lie. Museveni and his cohorts have amassed billions of dollars by way of plunder and corruption throughout his three-and-a-half-decade rule. In 2017, a law was enacted that removed presidential age limits. This permitted Musevni to run again in the upcoming election, which was widely seen as yet another sign of the corrupt nature of the state.

In the absence of any real workers’ party, the anger of the masses came to be reflected partially in the swelling of support for Bobi Wine (Robert Kyagulanyi): a former hip-hop singer. Known as the ‘ghetto president’, he speaks out about poverty and the corruption infesting the government. This has found an echo amongst the poor and dispossessed youth of Uganda and terrified the capitalist class. Wine is not a socialist, but even his mild demands (which essentially boil down to changing the people at the top of the system) are too much for Museveni and the ruling clique.

Museveni’s power lies not in this or that law, but a system of military control and repression. In a recent speech, Museveni himself said:

“I heard some people want to disorganise us, acting foolishly. No one has better weapons than us, no one is better at fighting, but we aren’t threatening people”

He couldn’t be clearer. Those who pose a threat to the government will be attacked. All members of the opposition know this very well, many of whom even fought with Museveni during the bush war. Kizza Besigye for example has for years stood up against Museveni, and as a result been on the receiving end of constant attacks. However, as the economic crisis deepens, the NRM regime has grown increasingly unstable.

Bobi Wine became MP for Kyadondo East in July 2017, having emerged onto the political scene after a career in music. The removal of the presidential age limit saw a huge boost in Wine’s popularity, as he joined opposition MPs in resisting the bill. This captured the attention of the youth, and manifested itself into a ‘people power’ movement.

Since rising in popularity as the main opposition to Museveni, he has faced relentless abuse from the government. A few years ago, he was arrested and tortured, which resulted in protests erupting across the capital and #FreeBobiWine trending on social media.

As we get closer to the election (January 2021), the government is stepping up its acts of intimidation. On Tuesday 3 November, only minutes after handing in his application to be president, Wine was arrested, and police officials smashed the window to his car, and used pepper spray against him – leaving him temporarily blinded. However, all of this is being shown online for Uganda and the rest of the world to see. His team regularly updates his supporters via social media. The violence of the state is visible to everyone and far from convincing the youth to concede to Museveni and his companions, it is radicalising the mood on the streets.

Right after nomination, Bobi Wine was violently arrested outside nomination venue! He's been brutalised by police and military. They've blocked him from proceeding to launch his manifesto at office. It's clear Museveni & his regime are in so much panic. WE SHALL OVERCOME Admin pic.twitter.com/1tv31cGxyM

Campaign rallies have been banned due to the coronavirus. No doubt, Museveni is attempting to curb the huge support Wine receives all over the country, as shown on his social media.

But the PEOPLE OF KITGUM resisted this illegal conduct and swarmed us. Consequently, we have not held our campaign meeting as planned, but the people of Kitgum spoke loud and clear!

Next stop: PADER AND THEN GULU

This is a REVOLUTION pic.twitter.com/VzFff3mIq6

For organisation and a revolutionary programme

Museveni is not stepping down. He may preach about order, but the truth is he is willing to drag the country into chaos to defend his position. The special armed forces are the only true base Museveni holds. Hence, sooner or later, these protests must become organised, to fight back against this vicious regime.

Musevni’s hold on power grows weaker as the economic crisis deepens, and African leaders around him fall. In Zimbabwe, Robert Mugabe was ousted from his position in 2017, after huge protests. This provoked panic in the Ugandan regime, where Ugandans on social media echoed the calls of the Zimbabwean masses to remove their leaders. Soon after Mugabe’s ‘resignation’, Museveni promised housing and salary hikes for teachers, soldiers, healthcare workers and public servants, something that had been “unaffordable” just before the events in Zimbabwe.

But it is not just Zimbabwe, last year in Sudan, a powerful revolution saw the removal of Omar al Bashir, president for 31 years. All these events are bound to be fresh in Museveni’s mind, who is clinging on to power despite the advice of those closest to him.

Much has been made of the role of violence and war in Uganda’s elections since independence. Despite achieving formal independence, the country has been stifled by various cliques in power ever since. The lack of democracy is intrinsically linked to the pernicious role of imperialism, the hangovers of the colonial regime, and above all the native bourgeois class, who wish to maintain their position of power and privileges. They are loyal servants to the interests of foreign capital first and foremost and have no interest whatsoever addressing the dire situation of the masses.

The Ugandan working masses must remove Museveni, but he alone is not responsible for the poverty, misery and brutality that is inflicted upon the people. It is part of the rotten nature of capitalism today, in decline and decay. The support for Wine could be transformed into a powerful mass movement that removes the sitting government, but what is needed is to put the movement on an organised basis and arm it with a clear revolutionary programme.

Firstly, the programme must call for the downfall of Museveni and the whole rotten establishment who control the state. A constituent assembly must be called, with representatives of the people elected to decide the way forward for Ugandan society. Furthermore, all assets of the mulit-nationals, along with those of Museveni and the ruling class, must be nationalised, put under the control of the working class and put to work according to a plan for the benefit of the Ugandan working masses. Only in this way can the social and economic problems of Uganda be solved.

Wine speaks about people power, and calls the current movement a revolution. What does ‘people power’ mean? For Ugandans to have genuine control over their lives, they must defeat the imperialists, their stooges and those who facilitate them in government, using the state to brutalise the people. None of these issues can be solved on the basis of capitalism, which must be uprooted through a socialist revolution throughout Africa, to secure the future of the youth.