At least 98 people have been killed by two explosions in the largest terror attack in Turkish history, hundreds more have been wounded. This is a clear continuation of the campaign of terror against leftist forces in Turkey, but it has triggered a backlash as tens of thousands of people have taken to the streets to protest against the government and their thugs. 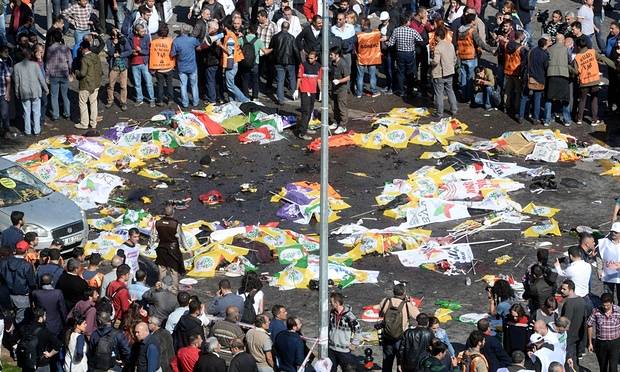 The tragic event occurred outside the Ankara railway station where thousands were gathering for a peace rally organised by the Confederation of Public Sector Trade Unions (KESK), the Confederation of RevolutionaryTrade Unions of Turkey (DİSK), the Turkish Medical Association (TTB) and the Union of Chambers of Turkish Engineers and Architects (TMMOB).

Posted by Siyasihaber.org on Saturday, 10 October 2015

One of the two explosions occurred during the passage of Peoples' Democratic Party (HDP) demonstrators who had just started marching, and the other during the passage of pro- Partizan-Kaldıraç demonstrators. Among the dead are eight members of EMEP party, including a member of the NEC of the left wing organisation. The brutal attacks were planned to cause the maximum amount of havoc and death.

A statement of the Leftist and Kurdish based party, HDP, read: “It should be indicated that there were no police around the crime scene when the explosion occurred. The riot police arrived to the place after 15 minutes. But when they arrived, they attacked by tear gas bombs against the people who intended to help injured people.”

The president of the Contemporary Journalists’ Association CGD, Ahmet Abakay, said, “The armored police vehicles arrived even before any ambulance was sent. The perpetrators are very well known. They are telling us that they can kill us and then prevent any news of the killing.”

Huseyin Demirdizen, from the Physicians Association of Turkey TTB, said, “while the physicians of the Health Workers Union were calling for blood donations, the government announced that there was no need for blood. If the health workers were not already in the meeting ground the number of deaths and wounded would have been much higher.”

At the same time an order has been given to block all Turkish media and social networks from reporting the event.

The Turkish president, Recep Tayyip Erdoğan “strongly condemned” the attack but his words reek of hypocrisy. Whether the attack was carried out directly under the supervision of the regime or “independently” carried out by Islamist forces -  which have been supported by Erdogan - is irrelevant.

“The AKP’s hands are red with blood and they support this terror (...) In this country, whoever speaks out against the government will be shot...[I]if you don’t support the government you will be deprived from basic human rights and means of prosperity (...) If a child throws a stone at the police, they will answer him with a bullet.(...) We are faced with a murderous mob state. How is it possible that a state with such a strong intelligence network did not have prior information on the attack?”

This attack is nothing but a continuation of the campaign of terror that Erdogan has unleashed against Kurdish and leftist forces in the past period. Similar, albeit less lethal, bomb attacks were waged against HDP meetings during the previous election campaign in the spring. A similar attack which had clear links to the Turkish government took place in the district of Suruç, in July, killing 32 young leftist activists. Since then a wave of hundreds of violent pogroms and terror attacks against Kurdish areas of Turkey has taken place under the clear protection of state forces. A violent campaign by the Turkish military in the Kurdish areas, has also led to more than 1000 killed while the government has started legal proceedings to imprison the leaders of the HDP.

All of this is clearly aimed at the Turkish elections which are due to take place on 1 November. Rising class struggle and opposition to Erdogan has been reflected in the rise of the left wing HDP, which entered parliament with 13 percent of the vote. Unable to accept that he lost the majority in parliament in the spring, Erdogan has been pushing to provoke a civil war with the PKK and to whip up an anti-Kurdish mood amongst the Turkish part of the population. The fact that today’s terror attack coincides with the calling of a unilateral ceasefire on behalf of the PKK might not have been a coincidence. There is speculation that the attack would have been timed to provoke the PKK into breaking the ceasefire.

The real aim of the terror is to divide Turkish and Kurdish workers and youth thus allowing Erdogan to crush both. But it seems that Erdogan’s actions are leading to a backlash. Tens of thousands of people have taken to the streets spontaneously, to protest against the Erdogan government. In Istanbul, tens of thousands marched to the historic Taksim Square chanting "we know the murderers” and “we are not afraid”. Another banner read: “The state is the murderer”. At the same time the leftist union federations have called a 48 hour general strike on Monday and Tuesday.

State is the murderer, reads the banner in #Istanbul protest amid the bomb attack in #Turkey via @imc_televizyonu pic.twitter.com/3ZN7km2Gz0

In a joint call for action against state terrorism the Confederation of Revolutionary Labor Unions (DISK), Public Workers Labor Unions Confederation (KESK), Chamber of Engineers and Architects and the Physicians Association of Turkey (TTB) expressed their outrage and declared that they have agreed upon a general strike against the government and for peace. The call stressed, “To protest the fascist massacre and to commemorate the death of our friends we are now in mourning for 3 days. The general strike is on October 12 and 13.”

The International Marxist Tendency expresses its full solidarity with the relatives, comrades and friends of the victims and their organisations. We call on all our supporters to participate in the protests that are already being organised.

The ruthless arrogance of the Erdogan regime could have the opposite effect to that which is intended. The Turkish masses are tired of poverty, misery and the corrupt and arrogant rule of the Erdogan regime. If organised on a radical basis, this movement could potentially be turned into a revolutionary uprising which would wipe aside the budding dictator and start a new chapter in the history of Turkey.

Down with State terrorism!

Avenge the deaths of the martyrs by organising a revolutionary uprising against their murderers!

Down with the government of murderers and thieves!