Fear has changed sides in Tunisia. For years the Tunisian population, its youth, its workers, its mothers were paralysed by fear of repression. Political lethargy was the rule, revolt the odd exception. Now things have turned upside down. Defiance of the brutal regime, its state, its spies, its media, its ruling party, its police and its army has become the rule during the three weeks of the uprising which has shaken Tunisia. This represents a seismic change in the consciousness of the youth and the general psyche of the masses, the poor as well as the middle class. This has had an impact not only in Tunisia but in the whole Arab world. 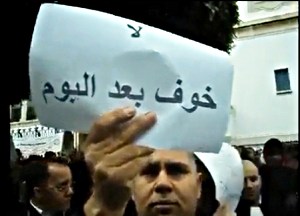 "we are not afraid anymore" The movement has not been subdued by persecution, imprisonment, torture and killings. Nevertheless the regime continues to kill, maim and torture the best of its youth. This weekend alone, the orgy of repression reached a new climax as 20 protesters were killed by the forces of repression. The police fired live ammunition into the crowds in Tala, Kasserine and Rgeb. “Legitimate self defence” is the explanation coming from the police headquarters. This is how the General-President responds to the advice of restraint coming from Washington. The young hearts beating for freedom and justice can only expect bullets and empty promises from this regime.

How can they imagine that they will be able to terrorise the youth into submission when that same youth is ready to immolate itself in protest against poverty?

The movement that started in the Central and Western rural areas of Tunisia has by now reached almost all corners of the country. Unemployment, poverty and a suffocating police state are pushing the masses into action. In the last weeks many others villages and cities witnessed one form or another of protest. In some cities the demonstrators attacked and destroyed government buildings, banks, police headquarters and the offices of the ruling party, the RCD. In others, trade union activists demonstrated in front of the headquarters of the union, the Union Général des Travailleurs de Tunisie (UGTT). In an about-turn, the domesticated leadership of the UGTT has being forced by the pressure from below to condemn the actions of the government. Demonstrations have been organised in the industrial suburbs of Tunis, in Ben Assour or in the workers bastion of Gafsa in the mining area. Local branches of the UGTT especially in the regions most affected by the revolt have been calling for strikes.

The UGTT leadership instead called for “a 1 minute silence” of hundreds activists in front of its headquarter in the capital, Tunis. School students and university students are also joining the uprising. Pitched battles between police and the students have taken place on campuses and in front of high schools. A lawyer's demonstration in Tunis was also brutally baton charged by the police. The police have also cracked down on cyber activists and a famous rapper who made a song criticising the President. The song is called “President, your people is dead”. In a response to this an international group of hackers (“Anonymous’) have attacked and brought down many government websites. “His majesty’s” opposition parties, the Progressive Democratic Party and the Renewal Movement also called for an ‘end to violence’.

Cracks are appearing in the regime. Indeed, all this repression is not a sign of strength but a sign of weakness, even of panic on the part of the dictatorship. Now the government has said that it will “respond” to the aspirations expressed by the three weeks of unrest. “The message has been received by the government and all political channels” declared Samir al-Obaidy, the country's communications minister. More promises of reform and investment will be made. But very few people trust those promises. They represent nothing compared with the needs of the population and compared with the wealth robbed over the years by the ruling clan. For instance the 15 billion Dinar plan of development of the central region promised last week represents only one fifth of the value of the villa of one of the sons in law of the President!

This uprising is to a large extent the result of spontaneous combustion. There is no central democratic organisation of the uprising and no clear program. But a layer of activists is reaching new conclusions and is starting to increase the level of organisation and consciousness at local and regional level. Within the UGTT union the tensions are rising between the rank and file and the dictatorship-friendly leaders. The student union, UGET, which has a tremendous tradition of struggle but was also high jacked by elements of the regime is going through turbulent times. Militant students are trying to reclaim the union. Whatever the immediate result of this movement, Tunisia will not be the same again. Clearly, the regime has started its decline. The speed of it will depend on the action of the masses.

The Tunisian uprising is also spreading to neighbouring Algeria. Protests broke out last week in the suburbs and working class areas of Algiers. Youth and families reacted angrily to the latest price hikes of sugar and salad oil. But those hikes are just a trigger of the new chain reaction of social revolt in the country. Deeper causes are spurring the wave of riots and clashes with the state. Algeria is an oil rich country. The obscene profits of the oligarchy are in stark contrast to the despairing situation of Algeria’s youth. 75 percent of Algerians below 30 years of age have no job. Then you have the terrible housing crisis which forces people to live in slums.

The Tunisian uprising and the revolts in Algeria are amplifying a new cycle of struggle in the Arab world started in Egypt a few years ago. This is class struggle, against capitalism, its local dictators and its imperialist puppet masters in Europe and the United States.

We have published a new article on the revolutionary events in Tunisia (Arabic) by supporters of the Arabic IMT website Marxy.com. We know that despite the internet black-out our ideas are being discussed amongst Tunisian activists. This article will be soon translated in English.