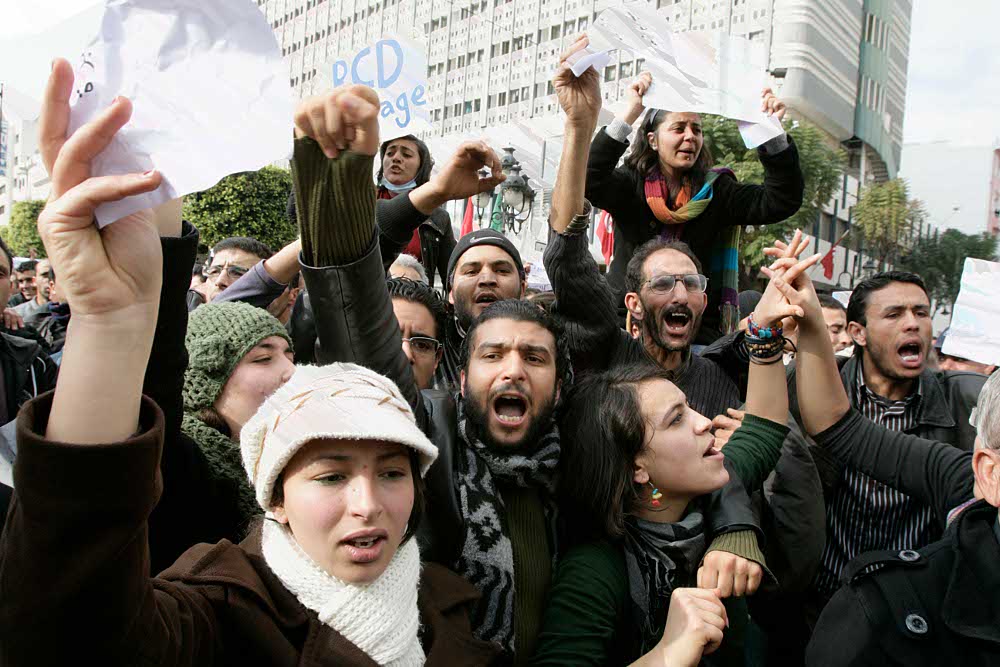 While the “new” Tunisian government of “national unity” (in fact, stacked with Ben Ali ministers) had its first meeting on Thursday, January 20, and attempted to rush through a series of measures which would gain it some legitimacy, the revolution continues on the streets and in the workplaces with workers taking on anyone in authority who had links to the old Ben Ali regime.

The “new” president Gannouchi was forced to announce the legalisation of all political parties, a general amnesty (though this was just a project, to be discussed in parliament) and the nationalisation of all buildings of the hated RCD ruling party. The government also declared three days of national mourning for the martyrs of the revolution. What utter hypocrisy, considering that the key ministers in this government were part of the government that killed these martyrs! There can be no mourning until those responsible for the killings are removed from the government and other official positions and put on trial.

Yesterday we reported that there had been demonstrations throughout the country of tens of thousands in every town and city, even the most remote. The growing anger against the government of Ghannouchi (Ben Ali’s prime minister) has developed into a national movement of protest which is spreading to all sections of society. Today there were even reports of a strike and demonstrations by police officers in Monastir, Bizerte and even parts of Tunis. Some were at work, directing traffic, but wearing red arm bands in protest.

The demonstrations continue and regional general strikes have already been called for today, Friday 21, in many different regions, with demands for the dismissal of the government of Gannouchi. “You stole the country’s wealth, but you will not steal the revolution – Resignation of the government – we will always be loyal to the blood of our martyrs” were amongst the slogans.

Yesterday we reported how a Provisional Council had taken over the running of all affairs in Sidi Bou Ali. We have now received a report that a similar development has taken place in the city of Siliana, in the North West where “the citizens have set up a local council for the protection of the revolution and the management of public affairs”. Their founding statement says that “faced with the vacuum of power created by the flight of officials linked to the RCD”, they have decided to create a local and a regional council “to protect the revolution and to manage the running of the city and the governorate.”

In a very significant development the Army seemed to be testing the ground as to how far they can go in restoring “order”, i.e. the old authorities, in the towns and cities which have been taken over by the peoples’ revolutionary committees. In the town of Sidi Bou Rouis, also in the Siliana governorate, the “Council for the Protection of the People's Revolution” has issued the following statement:

“The Army Commander has called the Bou Rouis local committees and told them that within the framework of things being brought back to normal functioning, the return of council members and mayors has been approved.

“As a result of this dangerous development ‘the Bou Rouis Council for the Protection of the People's Revolution’ has called an emergency meeting this evening to discuss the new situation and how to deal with it, and calls for the mobilisation of the whole people today and tomorrow in mass rallies and agrees the following urgent demands:

“1) The formation of a national transitional government consisting of national figures known for their integrity and who were not involved with the former regime to run state affairs and draft a new constitution and new electoral rules.

“2) The dissolution of the House of Representatives and the Council of Advisers, which lost all semblance of legitimacy during the people's revolution for freedom and dignity.

“3) The issuing of a ban to prevent elements of the former regime from exercising any political activity on the grounds of complicity with the former ruling party which plunged the country into a dark period dominated by injustice and tyranny, corruption and unemployment and the wastage of an unprecedented amount of wealth of the country at the expense of the public who are subject to all forms of repression and deprivation.

This is, again, an extraordinary state of affairs, in which the people have not only taken power in the whole of the Siliana governorate, but are standing strong in the face of the attempt of the Army to restore the old mayors back in power. We see how, like in the statement from the Provisional Council of Sidi Bou Ali, they call for a provisional government to be formed, composed of nationally recognized figures not linked to the old regime. We think that it should be the revolutionary committees and councils themselves who should organise such a transitional body, which should be charged with convening a genuinely democratic national assembly.

Meanwhile, the masses continue their direct action, deepening the scope of the revolution also into the workplaces. There are many reports of journalists in state owned newspapers, radio stations, TV channels, etc., which used to be nothing but disgusting mouthpieces of Ben Ali’s propaganda, getting organized and taking over the editorial line.

This is the case at the state-owned La Presse. El-Heni, a journalist in the foreign desk explains:

"We had an important meeting and decided to create two elected editorial committees to supervise the editorial line, and we told the boss that he would no longer have any editorial control… He is only here for finance and administration. He was clever enough to understand that."

One of the La Presse journalists, who had been sacked for political reasons, has been reinstated as the head of the journalists’ union in the paper.

In state owned companies, ministries and private companies owned or linked to the Trabelsi family, workers’ assemblies and strikes have been organised to drive out the hated RCD managers, CEOs and high ranking officials.

On Tuesday, January 18, UGTT workers at STAR, one of the country’s main insurance companies, went on strike and expelled the company’s CEO, Abdelkarim Merdassi, in protest at his links with the Trabelsi clan. This video captured the extraordinary moment in which the workers physically expelled him from his office while singing the national anthem.

Similar movements developed at the oil distribution company SNDP, where the CEO Rafaa Dkhul was also kicked out by the workers, who criticized his close links with the Trabelsi family. Dkhul had given the Trabelsi clan concessions of a number of petrol stations worth millions of euro. At the Banque de Tunisie, its general director Alia Abdallah and all high ranking officers have been barred by the workers, organized by the UGTT, from entering their offices, in order to prevent the destruction of potentially incriminating documents. The workers have seized all sensitive documents and computers.

Also expelled from their positions by the action of the workers and their trade unions are Moncef Bouden, from the Tax Office, Moncef Dakhli, CEO of the National Agricultural Bank and Montassar Ouaïli, CEO of Tunisie Telecom. The outgoing Minister of Sports, Abdelhamid Slama was prevented by the workers from entering his old ministry to pick up his things. The list of companies where the workers have taken action is very long. Today, the workers of the Tunis public transport went on strike also demanding the dismissal of the CEO of their company.

The Tunisian business press is full of articles complaining about the “lack of respect for the law” and asking “what is the Ministry of the Interior doing” about these actions on the part of the workers. An opinion article on the business website Web Manager Centre implored “Let’s not put businessmen on their knees”. Another was entitled “Discipline – ‘comrades’.”

The workers feel confident and are moving forward, not just against the bosses, but also against their own bureaucratic trade union leaders who until very recently were supporting the dictatorship of Ben Ali. An appeal is circulating for an extraordinary national congress of the UGTT to be convened in order to remove the current leadership.

Workers, however, should not stop at removing the old managers, directors and officials, but they should replace them with their own elected representatives, establishing workers’ control over production and the economy.

Clearly, the Tunisian revolution has shaken society from top to bottom. The workers and youth are on the streets and in a confident mood. The government commands no authority and the initiative is still firmly on the streets. Mass demonstrations are expected tomorrow.

The revolutionary movement of the Tunisian masses needs urgently to give itself a more organized character and a national coordination. The revolutionary committees and democratic trade unions need to be spread and strengthened at all levels. A national meeting of delegates from local, neighbourhood, regional and workplace committees and trade unions should be called at the earliest possible opportunity. Only such a body would have the legitimacy to convene a democratic constituent assembly. Workers and youth should continue and deepen their revolutionary activities in sweeping away all the institutions and representatives of the old regime. This is the only real homage that can be paid to the martyrs that died for freedom, dignity, bread and jobs.

The next few days will be crucial. If the revolutionary movement does not advance in a bold manner and poses clearly the question of taking power, then, slowly but surely, the forces of the ruling class will reclaim the authority they have lost. A situation of dual power cannot last indefinitely. The Tunisian people have a rich revolutionary history, but every uprising and general strike has been followed by a period of concessions and trickery, and then the ruling class reasserting its power again, through brutal repression. This is the time to put an end to this cycle and throw the Tunisian ruling class into the dustbin of history.