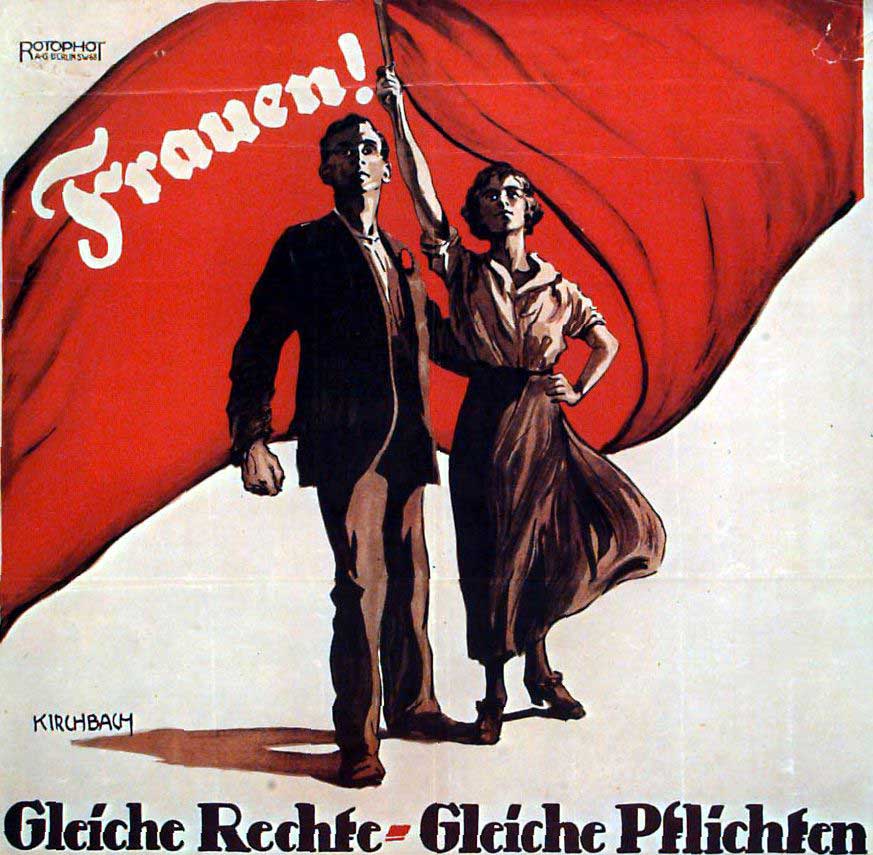 The German working class was one of the most powerful in the world with hundreds of thousands of workers organised in communist and socialist militias. In 1930, when Hitler and the Nazis got six and a half million votes, the Communist Party won four and a half million, and the Social Democrats eight and a half million - between them more than double the Nazis. United the Communists and Social Democrats could have crushed the fascists, had they fought alongside one another on the basis of a serious programme of struggle. Yet in 1933 Hitler could boast that he had come to power "without breaking a window pane". How could such a situation come to pass? Could it have been prevented? The whole period is rich in lessons for us today.

Since the second world war, having seriously miscalculated over Hitler, the ruling class has no intention of resorting to the fascist madmen. That is not to say that they defend democracy. They turn instead to military police dictatorships to try to preserve their system, and are quite happy to use the fascist gangs as reserves to carry out violent attacks.

At the same time the social base of fascism as a mass movement of the petty bourgeoisie ruined by a severe crisis of capitalism, along with the poorest sections, has largely dwindled in Europe. The working class is now the decisive majority of society. This should in itself provide a guarantee against reaction and for the success of socialism. However the question of class relations is not solved simply by arithmetic. It is necessary to have a correct policy, a programme, a party and a leadership capable of leading the struggle to a conclusion.

The leadership of the Communist International, by 1930 firmly in the grip of the Stalinist bureaucracy, had already been responsible for the squandering of the most favourable revolutionary situation in 1923.

In 1923, the collapse of the Mark and the seizure of the Rhineland by French imperialism had led to a revolutionary situation in Germany. Under the leadership of Rosa Luxemburg and Karl Liebknecht the revolution could have succeeded. However they had been murdered in 1919. In their absence, there was a crisis of leadership in the German party. The leadership of the Communist International under Zinoviev interfered changing the personnel of the German party for their own ends.

The result of these manoeuvres was that, when the revolutionary wave developed in 1923, the party was completely disoriented. Zinoviev - repeating his error of October 1917 when he and Kamenev opposed the insurrection - was skeptical about revolutionary prospects in Germany. Stalin was not even interested in the problems of the German Revolution, which was only a distraction from his manoeuvres in the apparatus. He urged the German party not to take any action. His advice to the German leaders was extraordinary and abominable - "Let the fascists try first!"

The leadership of the International and the German party failed this vital test and let slip a tremendous opportunity. As in Russia in 1917, before the return of Lenin and Trotsky, so in Germany in 1923, sections of the leadership vacillated, held back by Stalin, Radek and Zinoviev. They dismissed Trotsky's proposal to map out a plan and a timetable for insurrection and blundered too late into a botched attempt to take power.

Trotsky viewed these events with horror. He wrote The Lessons of October in an attempt to get the leaders of the Communist Parties to draw the necessary conclusions from the German events. But Stalin's clique could not tolerate an honest discussion of the German events which would damage its prestige. Trotsky's work was taken as the signal for a furious onslaught against so-called Trotskyism, and its central message was buried under a mountain of slander and abuse.

In a previous article we described how Stalin had burned his fingers badly in his attempts to lean on the capitalist elements in China and to conciliate the trade union bureaucracy in Britain. Now he turned the Comintern around 180 degrees. In the face of a mortal danger from reaction, not only did the Stalinists underestimate the threat, they pursued an appalling adventurist policy.

The Comintern proclaimed the end of capitalist stability and the beginning of what they called the "Third Period". (The first period was that of revolutionary upheavals after 1917; the second was the relative capitalist stability after 1923.) Now, this so-called Third Period was supposed to usher in the final collapse of world capitalism. At the same time Social Democracy, according to theory of Stalin, was supposed to have transformed itself into "Social Fascism". No agreement was now possible between the Communists and the "social fascists" who were declared the main danger confronting the working class.

In the 1930 elections the CP enjoyed a small rise in their vote. This was immediately declared a great victory. Meanwhile the Nazis vote rocketed. In the face of mounting crisis, the CP's share of the vote, their membership, and their position in the unions should have grown far more rapidly. Twice as many workers supported the social democrats. The CP leaders had done little to win their confidence since the defeat of 1923.

To conquer reaction, to conquer capitalism, one must first of all conquer the masses. They remained in the hands of the social democracy and could hardly be won over when they are denounced as twins of the fascists. The same geniuses who in China had catastrophically argued against independent class organisation and for the subordination of the Communist Party to the bourgeois nationalist Kuomintang, was now opposed to unity with other workers' organisations. In response to Trotsky's urgent demand for a united front, which could unite the powerful forces of the working class and demonstrate in action the consistent policy and determined fight of the Communists while exposing the lack of programme and the betrayal of the social democratic leaders, the Comintern leaders could accept only a united front "from below". The social democratic workers should abandon their own organisations and join with the Communists - but they had no faith in the Communists otherwise they would already have done so.

Despite Trotsky's appeals, the Stalinists continued with their adventurist line culminating in the obscene episode of the "Red Referendum". In 1931, the Stalinists went so far as to form an unofficial "united front" with the Nazis to bring down the Social Democratic government in Prussia!

Hitler was able to come to power almost without a struggle because of the paralysis of the German workers as a result of the policies of both the Social Democratic and Stalinist leaderships.

This is how the mighty German working class was handed over, bound and gagged, to the Nazis. The workers' organisations were destroyed. Communists and Social Democrats alike ended up in Hitler's concentration camps.

Despite their expulsion from the Communist International, Trotsky and his supporters still considered themselves as part of it, and insistently demanded that they be allowed to return to the ranks. At the same time they subjected the policy of the Comintern to withering criticism. In place of it they demanded a return to the realistic Leninist policy of the United Front as a means of winning the masses in action and through their own experience, to communism. With the victory of Hitler at the polls Trotsky sounded the alarm. In a pamphlet entitled The Turn in the Communist International and the Situation in Germany, he issued a signal for a campaign demanding that the German Communist Party call for a united front with the Social Democrats to prevent Hitler from coming to power.

A united front is the unity in action of the workers' mass organisations on the basis of a programme of struggle. Placing the workers organisations, and therefore their interests, at the disposal of bourgeois liberals is not a united front but what Trotsky called the "strike breaking conspiracy" of the popular front.

On the orders of Stalin himself, the German Communist Party denounced the united front policy as a counter-revolutionary "social fascist" one. Social Democracy was the main enemy of the working class. In September 1930, the Rote Fahne, organ of the German Communist Party proclaimed: "Last night was Herr Hitler's greatest day, but the so-called election victory of the Nazis is the beginning of the end." In May 1932, the British Daily Worker could proudly "condemn" the Trotskyists for their policy in Germany thus: "It is significant that Trotsky has come out in defence of a united front between the Communist and Social Democratic Parties against Fascism. No more disruptive and counter-revolutionary class lead could possibly have been given at a time like the present." Meanwhile Trotsky had written four pamphlets and dozens of articles and manifestos, to exert pressure on the Comintern to change its policy. To no avail. In January 1933 Hitler was able to take power without any organised opposition.

An organisation which cannot learn from the lessons of history and its own errors is doomed. As a force for world socialism, the Communist International was dead. The International Left Opposition broke away. It had become necessary to build a new International. There can be little doubt today that had the German Communist Party pursued the policy of the United Front, Hitlerite fascism would have been defeated and in its ghastly place could have flowered a workers' republic in Germany. The victory of the proletariat at the heart of the continent would have spelled the end of the bureaucracy in Russia and of decaying capitalism in Europe. The way would have been prepared for a new socialist world order. Instead the world was plunged into world war and all the barbaric nightmares of fascist reaction.

After the disaster in Germany, Stalinism quickly performed a new somersault bypassing the policy of the united front of workers' organisations and flew straight over to the opportunist policy of the popular front. This led to new catastrophes and defeats. Popular frontism will form the subject of a further article.

There are many lessons to be learned from this period in history and from Trotsky's writings. Above all the importance of theory, of understanding. With the wrong ideas even the most favourable situation can turn to dust. Armed with the correct ideas, a party and a leadership worthy of the struggle of the working class, no force on earth can prevent the victory of socialist revolution.