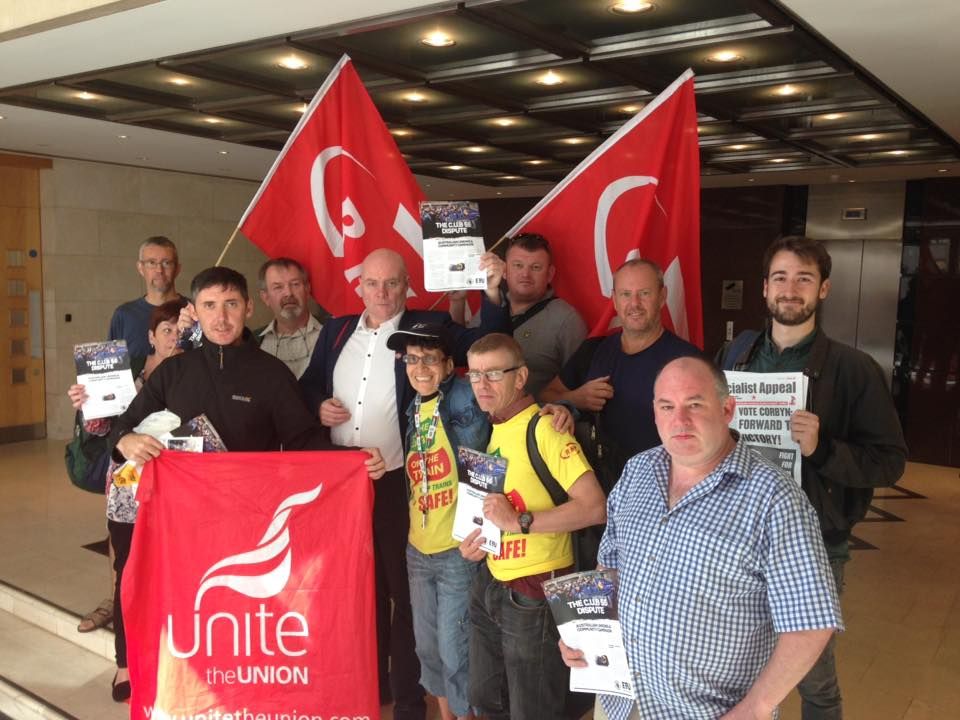 We publish here a report that highlights the attack on workers in the Carlton United Brewery, a subsidiary of the giant multinational SAB Miller, whose headquarters are based in London. Denis Rogatyuk reports on the solidarity shown by trade unions in Britain towards their comrades in Australia.

International solidarity with the 55 Carlton United Brewery workers sacked by the company and replaced with scab labour has grown.

On September 8, coinciding with the mass rallies in support of the CUB 55 in Melbourne, trade union activists tried to confront the company management of SAB Miller at their headquarters in London. SAB Miller is the parent company of CUB, with a total operating profit of $4.4 billion.

In Britain, a number of trade unions have also taken a position in support of the striking workers. One prominent example is the Nation Union of Rail, Maritime and Transport workers (RMT), which has more than 80,000 members working across the transport industry.

Unite the Union, Britain’s largest trade union representing more than 1.4 million workers across 26 industries, has also issued a statement of the support for the CUB 55.

RMT assistant general-secretary Steve Hedley spoke at the demonstration inside SAB Miller’s headquarters in London (pictured), saying: “We are to support 55 maintenance workers, fitters and electricians on strike in Australia. These people are faced with a massive wage cut, which they refused to accept.

“The company management here [in SAB Miller] are refusing to speak to us, but we simply want an explanation of why these people have been sacked in Australia.

“What we have asked the people in Britain to do is to boycott the products made by the CUB until the strike is over and the workers are reinstated.

“We enjoy drinking a lot of SAB Miller’s products, but with this strike, I don't think we’ll be doing that for a long time.”

In Ireland, Mandate, a union representing retail, administrative and distributive workers, also issued a statement of support for the 55 striking workers, and condemned CUB.

The CUB 55 strike has come to symbolise workers fighting back against multinationals seeking to crush workers’ rights. It also struck a nerve with unions around the world, because the tactics used by CUB — of pushing casualisation, sub-contracting labour and wage cuts — are used globally.

If the 55 workers emerge victorious in the Battle for the Brewery, they will send a message to SAB Miller and every other company around the world that seeks to break down job security and fair wages.