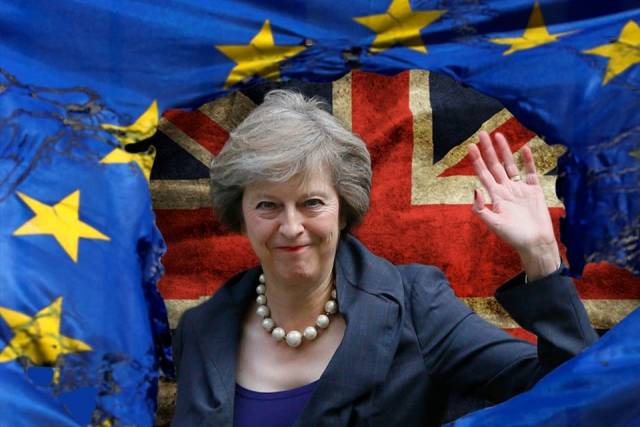 The die is cast. In her letter, hand-delivered this afternoon to the President of the European Council, Donald Tusk, Theresa May has announced the beginning of Brexit negotiations under Article 50 of the Lisbon Treaty, marking a point of no return for both British and European capitalism.

For the next two years the British government will be involved in the tortuous process of disentangling 44 years of European partnership, with the very real possibility of emerging without any deal at all, let alone a deal that simply leaves Britain worse off. This prospect will not have been far from the Prime Minister’s mind as she peppered her letter with saccharine references to the “deep and special relationship” she hopes to forge with Europe. Nor will it have escaped the notice of Tusk, whose sombre reply was, “We already miss you, thank you and goodbye.”

Beyond the economic turmoil entailed by Brexit, British politics also faces an unprecedented crisis. Superficial commentators may marvel at May’s considerable lead in the polls against an opposition at war with itself, but pride comes before a fall, and May’s current popularity as a champion of hard Brexit could evaporate overnight as the Brexit negotiations, and even the United Kingdom itself, begin to unravel.

For all of Boris Johnson’s bluster, the economic prospects for post-Brexit Britain look bleak. Decades of industrial decline have left the UK dependent on consumer spending and financial services. In order to continue growing, the UK economy therefore needs workers to continue buying consumer products and the City of London to continue to attract vast sums of casino capital from around the world. Brexit will put both scenarios at risk.

A trade deal, if one can be cobbled together at all, will take years. In the meantime, British industry may face high tariff walls, which could lead to further factory closures, unemployment and a new slump. Further, the potential loss of Britain’s so-called “passporting rights”, which are bound up with its membership of the European single market, has already caused some major banks to begin moving their operations out of London.

In the event of a hard Brexit, or a “train-crash” Brexit in which the UK simply falls out of the EU without a deal, the banks will have no choice but to abandon the UK, taking thousands of jobs and over £70bn in tax revenues with them, not to mention a significant chunk of GDP. May could try to negotiate a special deal granting the UK passporting rights, but this would obviously come at a hefty price, assuming the European powers accept such a deal, both in terms of the billions of pounds it would take to secure it and also in terms of the political firestorm it would unleash in the ranks of the Tory Party (not to mention the electorate).

Meanwhile, despite the optimism surrounding the resilience of British consumerism, British workers are feeling the squeeze. Between 2007 and 2015, real wages fell by a staggering 10.4%, the most severe decline of all OECD countries (equal to that of Greece). The nosedive of the pound following the vote in June has shown no sign of reversing and, as inflation begins to bite, workers can only expect further drops in living standards. As one analyst put it in The Financial Times, “It’s down to the bottom of the barrel”.

The answer of the government has been to shift the burden of the UK’s failing economic recovery onto the shoulders of the working class under another austerity budget. Hammond’s embarrassing U-turn over National Insurance will come as a relief to many, but we can still expect years of rising prices, underemployment, attacks on workers and tax breaks for the rich. Austerity is now projected to last until 2020. In reality it will last even longer as the crisis grinds on. Deal or no deal, further poverty, social strife and class struggle are firmly on the order of the day all over Europe.

The end of the union?

The current row over Nicola Sturgeon’s demand for a second independence referendum in Scotland by the Spring of 2019, recently backed by the Scottish Parliament, has dealt a big blow to May’s Brexit ‘plan’. May has insisted that “now is not the time” for a second referendum and will seek to postpone it until after Brexit is finalised, but this will only further exacerbate the problem and may well push Scotland out of the Union. All the government can do is posture and prevaricate: hardly a picture of strength.

If the brewing revolt north of the border is not enough, the Stormont elections have provided another headache for May. While the question of a hard border following Brexit continues to loom over British and Irish politics, for the first time since the Good Friday Agreement the Unionist parties have lost their majority, raising the possibility of direct rule from Westminster if no government can be formed: a nightmare scenario for all involved.

For fear of splitting her party, May must cling like grim death to her hard Brexit course, but the consequences will be catastrophic for British capitalism and may even lead to the breakup of the centuries old United Kingdom. At a certain point she will have to make the same choice that Cameron faced: either break the Tory Party, or the country. It is ironic that it should be a Prime Minister from the “Conservative and Unionist” Party who will likely oversee such a shattering of the status quo and the country, but this is the nature of the crisis. The historic impasse of British capitalism shows itself as the crisis of its political regime.

Despite the despondency over the prospect of “generations of Tory rule”, the apparent stability of the government will prove short-lived. Faced with one crisis after another, and wracked by internal division, the current Tory majority is a castle built on sand. Already, there are up to 20 Conservative MPs facing investigation as a result of the election expenses scandal enveloping their party.

The contradictions that are building up in British society are reaching a critical stage. The constant squeezing of the working class is preparing an explosive situation. Rage which has built up over decades is exploding onto the political scene as millions seek a way out. Frustrated by the failure of all the mainstream parties, the mood of the masses shifts violently in all directions. The rise of anti-establishment parties all over the world is a graphic demonstration of this fact. Make no mistake, these are the early tremors of a revolutionary crisis.

For decades the leadership of the Labour Party has merely provided a left cover for the interests of the British ruling class. This is the source of its present crisis, not Corbyn. Annihilated in Scotland, side-lined on Brexit, the Labour Party cannot pose a real alternative unless it clears out the Blairite careerists from its ranks and adopts a bold socialist programme.

Simply fighting for single market access in order to protect British business or seeking “sensible controls” on immigration offers no way forward. Let the Tories and Liberals fight over who best represents the bosses - we need a party which represents workers!

Only the working class, mobilised to change society, can provide a solution to this crisis of capitalism. Instead of hoping to patch up capitalism, or promising to protect the same banks who threw the economy into crisis in the first place, the Labour Party should be fighting to change society, including the nationalisation of the commanding heights of the economy, under democratic workers’ control and management. This would provide the basis for a democratically planned economy, run in the interests of the majority and not the profits of the few.

Campaigning openly for a bold socialist solution to the crisis, Labour would gain colossal support and could appeal to the workers of Europe to topple the bosses’ EU and establish a new Socialist United States of Europe. This is the only real alternative to the chaos of Tory Brexit.