The past few months have seen the return of right-wing attacks on the Venezuelan government and Venezuelan president Hugo Chávez. Also implicated in these attacks has been Alan Woods, the founder of the international Hands Off Venezuela campaign and editor of the popular Marxist website In Defence of Marxism. We were fortunate to have Alan speak at Casa Romero in Toronto’s west-end via video-link, where he answered the lies of the world’s corporate press, as well as why they have attacked him and the HOV campaign personally. 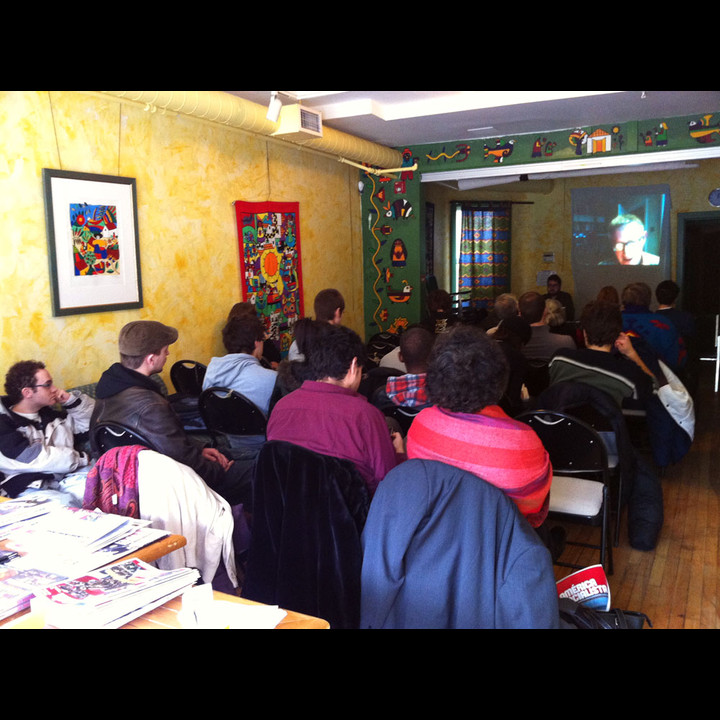 The Venezuelan revolution has been ongoing for 12 years and through its duration, very important changes have occurred in the lives of poor and working class people in Venezuela. The vast majority of Venezuelans see the revolution embodying their existence. The turnout of millions of ordinary Venezuelans in the face of a military coup d’état in 2002 show the significance that the revolution has had in their day-to-day lives.

This being said, Alan also emphasized that the basic tasks of the socialist revolution had yet to be completed in Venezuela, and the delay in carrying out these tasks was endangering the future of the revolution. “All is not well,” said Alan. “The National Assembly elections (on 26th September) are a warning to the friends of the revolution. Why did the counterrevolutionaries achieve what they did?”

Alan outlined some of the difficulties that Venezuela has been facing recently — high inflation, the closure of factories, the loss of jobs. All of this can lead to a certain level of disillusionment amongst the masses who support the revolution. The National Assembly elections were notable not for the amount of votes that the opposition gained, but the number of votes that the PSUV lost. Many did not see enough of a reason to go vote.

Alan warned the audience, “The victory of the revolution is not assured.” He gave a recent example of how the counterrevolutionaries in Venezuela are becoming increasingly emboldened; opposition students, the sons and daughters of the Venezuelan oligarchy, had recently organized a hunger strike outside of the OAS offices in Venezuela, attempting to portray the Venezuelan government as being dictatorial.

Obviously, there is no dictatorship in Venezuela, especially given the lies that the right-wing opposition is allowed to get away with. Alan mentioned how in many other countries, including countries like Canada and Britain, would shut down any media outlet that advocated violence and the overthrow of the government. Furthermore, the opposition has now used the corporate media to spread lies about Alan Woods, the Marxists within the PSUV, and the Hands Off Venezuela campaign. Incidentally, these same lies have been picked up by the international corporate press, including the Economist, the Daily Telegraph, the BBC, and even Canada’s own Globe and Mail.

The oligarchy and their allies in the bourgeois press have attempted to portray Alan Woods as “Hugo Chávez’s Welsh Trotskyist advisor,” as the Globe and Mail had labelled him. As such, the opposition were trying to scare people into believing that Hugo Chávez and his Marxist allies were going to destroy all private property, expropriating every last barbershop and ice cream stand.

First of all, Alan emphasized that at no point was he an adviser to President Chávez or anyone else in the Venezuelan government, although Alan has met and discussed with him on several occasions, and President Chávez had recommend Alan’s latest book, Reformism or Revolution: Marxism and Socialism in the 21st Century, on his television show.

Despite the limitations of the technology allowing for the video conference, a number of questions were posed of Alan. One person asked about the links between the Cuban and Venezuelan revolutions, which led into a bit of discussion on the challenges facing the Cuban revolution.

There was also significant interest in Alan’s opinion regarding Venezuela’s position towards Muammar Gaddafi and the revolutionary movements in Libya and the rest of the Arab world. Alan replied that he was in full agreement with Chávez that any imperialist intervention in the region must be opposed, and that foreign imperialists were looking to take advantage of the situation. But, it would be wrong to portray the likes of Gaddafi or Ahmadinejad as revolutionaries or anti-imperialists. Alan said it is necessary to maintain economic links with other OPEC countries, but this is different than giving these regimes a revolutionary character, especially when they are so oppressive against their own masses. The real allies of the Venezuelan revolution are the workers and poor in Libya, Egypt, Tunisia, Iran, and other countries of the region, who have looked to the Venezuelan revolution as an example of what is possible and have revolted against tyrannical regimes, who incidentally, have worked hand-in-hand with imperialism to institute mass cuts, privatizations, and austerity against their own people. Alan commented on how a number of polls had shown that President Chávez is one of the most popular political leaders in the Arab region.

Alan finished his talk by telling the audience that revolutionaries in Venezuela and the rest of Latin America are not alone. We are witnessing the glorious revolutionary struggle of the Arab masses; we have seen the workers and youth of Western Europe rise up; and now, we are watching the possible development of a general strike in Wisconsin, in the heart of the United States. Alan warned the Canadian ruling class that it was only a matter of time, probably fairly short time, before capitalism was being threatened in Canada itself.

For pictures from the event, please check our Flickr site.

Also, check out a video interview with Alan Woods where he answers the bourgeois media attacks on him: