With the endless coverage of Labour in-fighting in the media one could be forgiven for assuming that the rest of British politics was a sea of tranquillity. But over the last few months the burgeoning split in the Tory Party over the question of the EU has burst to the surface. 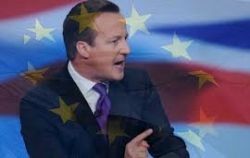 Telegraph reported that Tory Party Vice Chairman, Mark Field MP, had said that any ministers who back Brexit “must leave the government”, while Lord Heseltine, the former Deputy Prime Minister, warned there would be “civil war” in the party if cabinet ministers were given a free vote in the referendum.

Despite these grave predictions, David Cameron announced in January that Tory MPs would be able to vote with their ‘consciences’, amid fears of high-profile resignations if the vote were whipped.

This is not the first time a Tory Prime Minister has been held to ransom by his own party. John Major faced a similar crisis in 1993 over the implementation of the Maastricht Treaty, in which 22 Tory MPs rebelled at a time when the government had a parliamentary majority of only 18.

There is however an important difference between the rebellion of 1993 and that which is rapidly developing today: this time it will be much larger. Over the last 20 years the Tory Party rank-and-file – the “swivel eyed loons” – have shifted overwhelmingly in favour of Brexit.

Today, the Eurosceptic wing is no longer a minority; it could claim the support of the majority of both activists and MPs. In an article for the Financial Times entitled, “We Tories are all Eurosceptics now”, John Redwood MP claimed that there were two wings in the Tory Party: a Eurosceptic wing, which would like to remain in the trading bloc but avoid the regulations that come with it; and a Brexit wing which will not accept anything less than withdrawal.

This has created a particularly uncomfortable situation for MPs, with the Financial Times reporting that local constituency associations had even threatened some MPs with deselection if they campaigned to stay in the EU.

The gravity of this threat did not go unnoticed by Cameron, who issued an order to MPs, telling them to ignore local party activists’ views when they decided on their positions, prompting howls of indignation from 43 local Conservative associations.

Meanwhile, Cameron’s attempt to square the circle with his negotiations for “fundamental change” of the EU has fallen completely flat. Rather than galvanising his support, the concessions offered have been dismissed and derided as a “choreographed charade”.

It is remarkable that at a time when the interests of the dominant wing of the British ruling class are at stake, the Conservative Party – historically the most stable party of the ruling class in Europe – is in turmoil. In fact, this demonstrates the depth of the crisis which is polarising society in Britain and around the world.

With Cameron’s negotiations nearing their lacklustre conclusion, a referendum as early as June this year seems likely. Regardless of the result, this vote will likely do more harm than good for the Tories and may even precipitate a split.

There is a bitter resentment in the party over this issue, which has built up ever since the Heath government brought the UK into the Common Market in 1972. In December, Simon Heffer wrote in the Telegraph, “some Tories hate each other with a loathing that defies description” and “it may get uglier yet”.

If Cameron campaigns for a vote to “Stay” (which he almost certainly will do), he will be branded a traitor by a significant layer of his own MPs. William Hague, himself a Eurosceptic, already attracted considerable venom for his decision to support a “Stay” vote.

Further, there are plenty of prominent Tory MPs who will be acutely aware of this fact, and may even use it as an opportunity to grasp the throne; Boris Johnson, the consummate opportunist, for example has yet to commit to either side.

Two broad perspectives therefore open up: either Britain votes to leave the EU, in which case the Prime Minister will be utterly discredited and may be forced to step down; or Britain votes to stay and he will be left at the head of a party in open rebellion. Either way, a period of even greater instability will open up for British politics.

Recently, the shadow minister, Toby Perkins, was reported as saying “the forces unleashed within the Conservative party are so great that, whether Cameron wins or loses, many of their MPs and activists will feel it is time for a change at the top.”

He added, “If a new Conservative leader demanded a general election it is impossible to imagine how Labour could refuse to go to the country.” This means that despite the Fixed-Term Parliaments Act, Britain could be faced with a snap election as early as this year.

The prospect of a general election fought between a government in turmoil and a Corbyn-led Labour Party would strike terror into hearts of the British ruling class. In such a situation a Labour victory could not be ruled out, which is precisely why the media goes to such great pains to assert Corbyn’s “unelectability”.

It is even possible that in an attempt to prevent this doomsday scenario a number of ‘moderate’ Labour MPs could join with the ‘sensible’ faction of the Tories amid calls for a repeat performance of the National Government of 1931 to rule in the “National Interest”.

For the Left, our task is clear: we must build around Corbyn a strong and unified Labour Party, standing on a bold socialist programme. To do this we must fight against the sabotage of the Blairites and push for the deselection of those MPs who seek to undermine the party.

Source: Tories at war over Europe