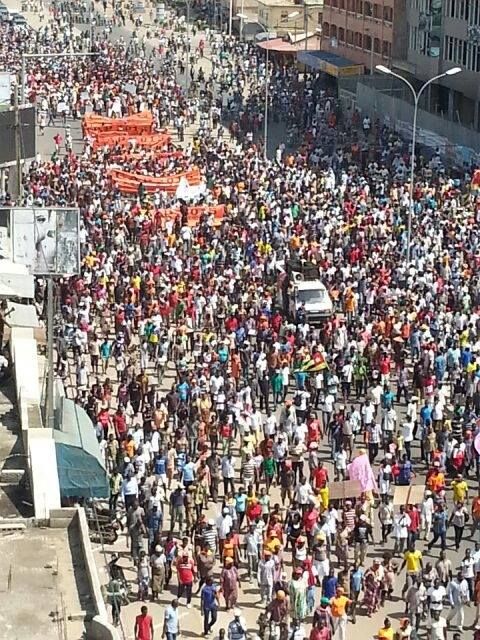 A revolutionary situation is currently spreading across West Africa. Over the last few days and weeks, big movements of the masses have shaken the regimes of Togo and Gabon to their foundations. It is clear that these are not isolated events. Rather, it is part of a revolutionary wave which has the potential to engulf the entire region.

On Friday, 21 November, thousands of people came out onto the streets of Lomé, the capital city of Togo, to demand amendments to the constitution of the country which will impose presidential term limits. This demand (and the whole situation in West Africa generally) is similar to the one which led to the Burkinabé revolution on 30 October which resulted in the revolutionary overthrow of Blase Compaoré.

A coalition of opposition parties, known as CAP 2015 under the leadership of Jean-Pierre Fabre, organised a march to demand the reforms before the presidential elections which are scheduled for March next year. As was the case in Burkina Faso, the Togolese are also faced with a life-long dictator, Faure Gnassingbe who wants to extend his stay in office by standing for another term as president.

Masses call for end of regime in Togo

Demonstrators called for reforms which would prohibit Gnassingbe from running for president for a third term. ‘’We demand immediate reforms or regime change’’ said one poster and ‘’50 years for father and son is enough’’, read another poster, referring to the Gnassingbe dynasty.

The mass demonstration came under attack from the security forces when the march deviated from the original route and, instead, started to make its way to the parliamentary buildings. After the events in Burkina Faso where protesters burned down parliament on 30 October - an event which shook the whole region to its core - the police clearly panicked and started firing water cannons, tear gas and rubber bullets in a bid to disperse the crowds. Running battles between youths and police then ensued in the city centre with young men pelting the police with any objects they could lay their hands on including stones, pipes and bottles. In one instance, the barrage from the protesters was so severe that some policemen dropped everything and were seen fleeing from the demonstrators and taking refuge in nearby houses.

The police, however, succeeded to break up the the main march. Later the authorities called in the army, but by the time they arrived the main part of the demonstration has already been dispersed. In the aftermath of the clashes, two people were seriously injured. The regime promptly organised a ‘’pro-government’’ march with several thousand people taking part. This was a complete farce because it was clearly a ‘’hired crowd’’ complete with replica pro-regime white t-shirts. 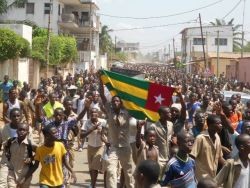 On Saturday, 22 November, Lomé was under de facto martial law with soldiers patrolling the streets and confiscating video footage from journalists. Although the regime has cracked down hard on the protesters, it is clear that this has only inflamed the situation. The opposition has now called for another day of action for this Friday, 29 November.

Faure Gnassingbe succeeded his father, Gnassingbe Eyadema who had ruled Togo with an iron hand for 38 years until his death in 2005. The death of Gnassingbe senior led to mass instability which threatened the very existence of the regime.  The younger Gnassingbe had to tread carefully and started making cosmetic concessions to the opposition, mainly in the form of ‘’consultations’’ and ‘’dialogue’’, while he kept the reins of power firmly in his grasp. 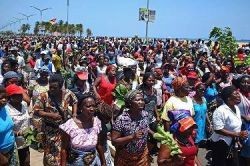 The most dangerous moment for an autocratic regime is when it starts to reform, when it starts to slowly lift the boot. The granting of these‘’reforms’’ were enough for the emergence of a mass movement under an umbrella organisation called ‘’Operation Save Togo.’’ There were also clashes in June 2012 around the same issues, although on a smaller scale.

The weakness of the opposition is that it limits its demands to the question of presidential term limits. It also want to negotiate its way to this goal at a time when the regime is not prepared to give away anything substantial.

In a 2012 interview with the BBC, Alphonso Kpogo, one of the Operation Save Togo leaders said: ‘’There must be consensus over the adoption of these laws. Either they accept to hold dialogue to get consensus before going to the elections or we will chase them out of power through a revolution.’’

After the events of 21 November, it is clear that the masses are tired of the belly-crawling of their leaders like Kpogo before the regime and have taken him up on his second proposal!   On the other hand, they have clearly created a mass movement which, like Burkina Faso, has the potential to overthrow Faure Gnassingbe by force.

The demands of the Togolese masses clearly go much beyond the issue of presidential term limits. There is also deep resentment over the economy. Togo is an extremely poor country where agriculture is the dominant sector of the economy. The 2008 global crash led to a decline in cotton production and an almost complete halt to the phosphate industry.

It is the combination of all this and the generalised anger that has helped feed protests. This was confirmed by a merchant in the central city square who said: “If the economic situation is better, we don’t care who is president or not. We just want to eat.’’ Although this is somewhat of an exaggeration, these material conditions, together with the revolution in Burkina Faso, are the main reasons for the current upheavals. One demonstrator said, ‘’Like Burkina Faso, we will get rid of Faure next year.’’ The way things are going, this could happen a lot sooner.

In Gabon, a tiny country with only 1.5 million people, the situation is also moving towards a revolution. Like Faure Gnassingbe, the Gabonese dictator, Ali Bongo Ondimba also ‘’inherited’’ the presidency from his father, Omar Bongo who died in 2009 after 42 years in power. In what can only be described as a ‘’carbon copy’’ of the situation in Togo, Ali Bongo was also immediately faced with the same problems and the resultant instability. Almost immediately after his seizure of power, protests broke out which were violently suppressed by the army.

However, brute force alone cannot hold down a mass movement in these conditions. On 11-13 November this year, the capital city of Gabon, Libreville, was in the grips of ferment when clashes broke out between youths and security forces around the parliamentary buildings. In one instance, hundreds of youths stormed parliament but were immediately repelled by police. The reason for this was that these protesters had separated themselves from the mass movement and as a consequence, were no match for the police.

The weakness of the regime is, however, shown by its response to the protests. At the mere announcement of demonstrations, the government immediately closes down schools. And this is no accident. Ever since December 2013 high schools have been a meeting place for youth activists as they campaign against the despotic regime. Ali Bongo is now in a very precarious situation because the situation is developing by the day.

On 18 November, protesting soldiers in Ivory Coast entered the television and radio headquarters in Abidjan to demand unpaid pay and bonuses for the last three years. Soldiers also set up barricades and blocked traffic in six military bases in Abidjan, Bouake, Korhogo, Bondoukou and Dalao. In the cocoa producing heartland of Dalao, trade in this commodity came to a standstill. This prompted the government of Alassane Ouattara to step in and pay the outstanding bonuses immediately before the situation could escalate.

These are just some of the examples of the revolutionary winds which are currently blowing across the West African region, with the situation being most advanced in Togo. It is clear that some of these regimes are hanging by a thread and could be swept away by any sustained mass campaign. What is particularly noticeable is how quickly  the ruling elites and their imperialist masters, France and US imperialism, have moved to quell the situation. It speaks volumes that tiny and impoverished countries like Togo and Gabon can give the big powers such headaches. What really terrifies them is that this revolutionary mood could spread to bigger countries like Nigeria. While it is still relatively easy to contain the situation in a country like Gabon, it is clear that Nigeria with its big economy and working class is a totally different matter altogether. An open revolutionary situation in Nigeria would not be a local or regional event.  It could connect with countries all the way down to South Africa with its mighty working class which is already in ferment. Such a prospect has the potential to set the entire continent ablaze.