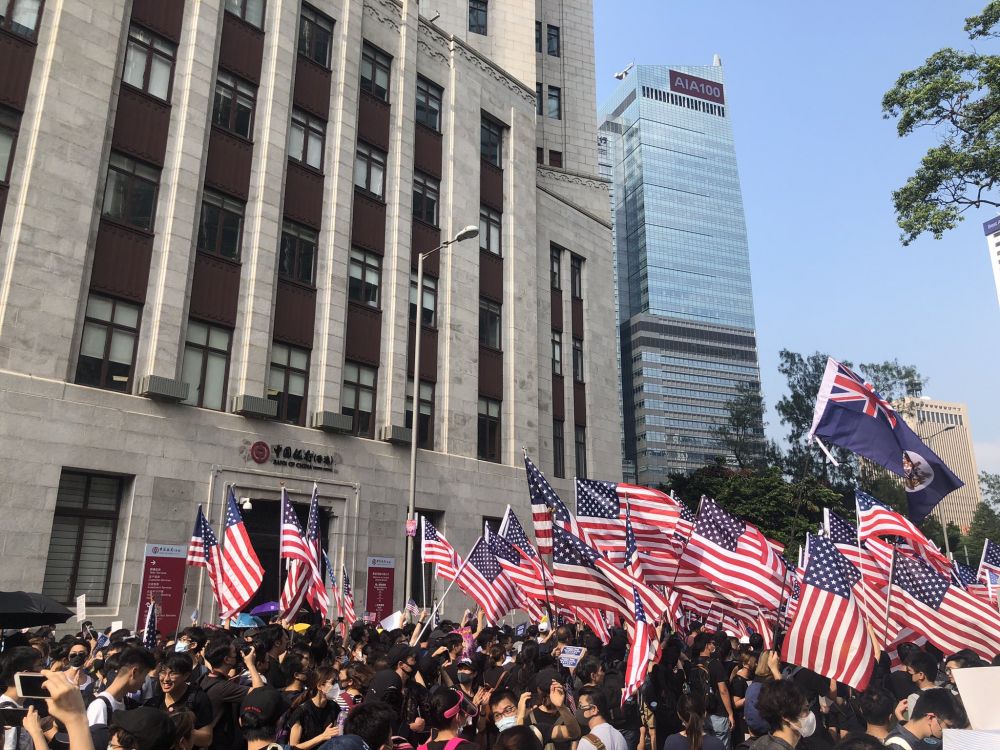 The Sunday 8 September protest threatens to lead the movement in Hong Kong in a reactionary, openly pro-US imperialist direction. This is extremely dangerous for the movement and must be firmly and unequivocally rejected.

The march went to the US consulate in Hong Kong and was strewn with US flags. Some posed outside the consulate draped in the flags of the G7 countries, begging for their ‘humanitarian’ assistance.

The leaders then posed for photographs with a large banner which read “President Trump, please liberate Hong Kong.” In the pictures, you can see that this was all organised by Hong Kong Autonomy Movement: a coalition of anti-Chinese bourgeois liberal and right-wing figures. It is a funny kind of autonomy proposed when you must prostrate yourself before a foreign power to secure it!

The strategy of this group (which, as many have pointed out, is strongly associated with the reactionary bourgeois coalition “Hong Kong Autonomy Movement”) is to utilise the interests of American imperialism to undermine China and get what they want. Many on the right wing of the movement in Hong Kong already have ties to US imperialism through the National Endowment for Democracy, a CIA front which has openly spent $29m in Hong Kong since 2014.

The right wing of the movement in Hong Kong has latched onto the Hong Kong Human Rights and Democracy Act currently making its way through the US Congress. This act was introduced by arch-imperialist Republican Marco Rubio and his Democratic counterpart Ben Cardin, and threatens to revoke Hong Kong’s special status, which allows it to import advanced technology from the US and to avoid other trade barriers that China must endure. The thinking is simple: if they can encourage this law to be passed, China will suddenly grant Hong Kongers everything they ask for to avoid barriers to trade with the US.

There is a rather obvious flaw in this strategy: China is currently embroiled in a trade war with the US, and is digging its heels in. Although it does fear the economic repercussions, it sees no alternative, and knows that being able to blame the US washes well with the Chinese working class, who understand quite well what US imperialism is really about.

This strategy is absolutely criminal and Hong Kongers fighting for democratic rights must strongly reject it and all those who preach it. Trump is no friend of the Hong Kong masses – indeed he has already written off the protests as riots. 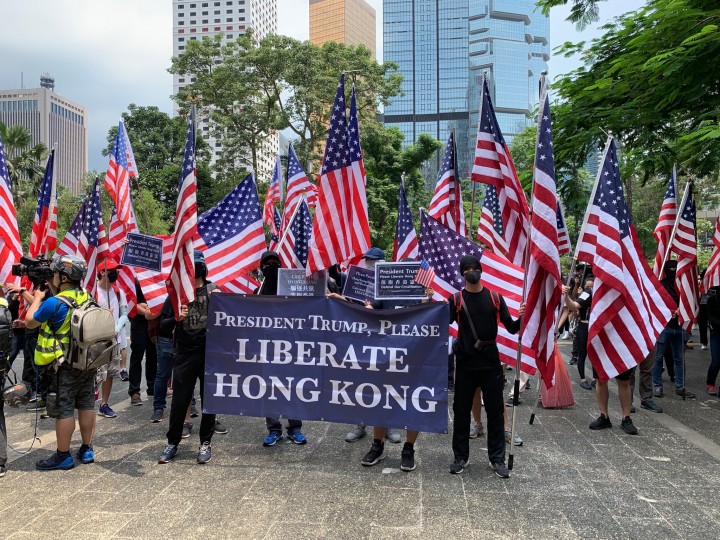 The right-wing of the movement is appealing to imperialist powers to "liberate" Hong Kong, but they will do no such thing. The USA in particular has shown time and again that it is no agent of democracy / Image: fair use

The idea that the United States is a friend of democracy is preposterous. Everywhere Washington has intervened, it has done so to advance and protect the imperialist interests of US big businesses. This was the case in Chile in 1973, in the Iraq war, in the Honduras coup of 2009 and in the more recent attempts at regime change in Venezuela, just to give a few examples.

The US has no qualms about doing business with the reactionary, undemocratic Saudi regime, which is carrying out a murderous war in Yemen, as long as the relationship is beneficial to the interests of US imperialism (through oil and weapons contracts, influence and regional power).

More importantly, Hong Kong’s problems are far deeper than those of a dictatorial regime. As we have always pointed out, it is one of the most unequal places in the world, housing is many times more expensive (both in absolute terms and in relation to wages) than even in London and New York, and the quality is extremely low as well. Working hours are obscenely long, as they must be for workers to afford the boxes in which they live.

To think that Donald Trump and Wall Street have the answers to these problems is madness. Should Hong Kong somehow gain autonomy from China on a capitalist basis (which will not happen), US imperialism will do nothing to address the crying injustices inflicted upon Hong Kong workers each day.

This liberal, pro-US strategy plays right into Xi Jinping’s hands, because it serves to isolate the Hong Kong workers from their only real allies – the workers of mainland China, who suffer not only the same political regime but the same social crisis of rampant inequality and exploitation. But mainland workers will not be inclined to spread the struggle against Beijing’s regime throughout China after seeing the appeals to Donald Trump and the anti-Chinese propaganda.

Throughout the 14 weeks of this movement, the Hong Kong masses have shown tremendous bravery and determination. They have put their lives on the line to fight an extremely powerful regime for democratic rights. But throughout this movement they have suffered from an absence of clear leadership capable of taking the movement forward.

The self-appointed leaders or figureheads of the movement, like Joshua Wong, are bourgeois liberals of the worst kind. Their whole approach, in tactics, strategy and politics, is counter-productive. Wong is currently in Germany trying to get the support of European imperialist powers. In an open letter to Merkel, he has revealed the real content of his policies.

“We urge the free world to stand together with us,'' he says, comparing the situation in Hong Kong with that of Berlin during the Cold War. The “free world” he is appealing to is, of course, led by the same imperialist powers that oppressed the colonial peoples’ historically, in the most brutal way – including China – and which now prop up all sorts of dictators in Third World countries, as long as they are on their side. The next stop in Wong’s tour is the United States itself, where he will lobby imperialist politicians to “liberate Hong Kong”. 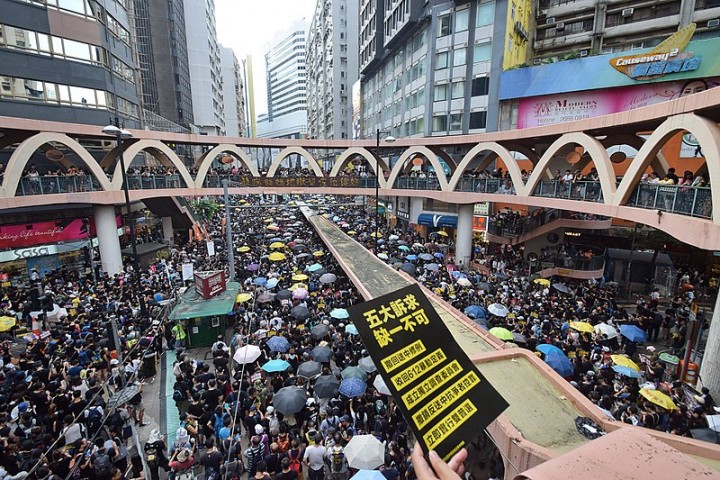 The movement has shown tremendous courage: it needs an equally courageous leadership, class struggle methods and a socialist programme to avoid defeat and carry it forward / Image: Baycrest

This has led to an atmosphere of despair and desperation. People feel that their way of life, and the city that they know, is on the verge of being extinguished. Therefore, they are prepared to fight ferociously. But with no clear programme of action, no coherent alternative, no answer for how the people of Hong Kong can actually end Beijing’s dictatorship, they are beginning to despair.

This is compounded by the inadequacy of the Civil Human Rights Front; key organiser Jimmy Sham Tsz Kit being a member of the League of Social Democrats; and the Hong Kong Confederation of Trade Union (HKCTU)’s timid methods towards the bosses. Their repeated urge for workers to go on “strike” with the permission of their employers – as well as continually bungling their efforts to organise “general strikes” – is making mockery of the strategy of industrial action before the eyes of many who have never been exposed to class struggle methods.

Therefore, a section of the protesters are losing faith in strikes and are turning towards reactionary methods, such as appealing to the US Congress and Trump, which appears to them as expedient. This led to the large turnout at Sunday’s rally in front of the consulate, which organisers claimed to have been 250,000 (probably an exaggeration). Back in 26 June, only around 1,500 people went around foreign consulates in Hong Kong and begged for western intervention.

This is gradually causing the movement to enter a decline, for now at least. As this happens, the well-funded, right-wing fringe of the movement can begin to take more of a centre stage and speak in the name of the entire movement. Their strategy of appeals to imperialism will alienate the movement’s left wing, and close off any chance of solidarity from the mainland. As the movement finally fizzles out, the regime will then take the opportunity to repress all the key individuals and organisations, especially on the left.

The only way out of this perspective is with the methods of class struggle and the programme of socialism: by mobilising the youth and the working class around a programme of, not just democratic rights, but social rights. These should include a mass social housing plan, nationalisation of the property of Hong Kong’s super rich, and an internationalist appeal to the workers of the mainland to join in a common struggle against the bosses and all the ills of capitalism.