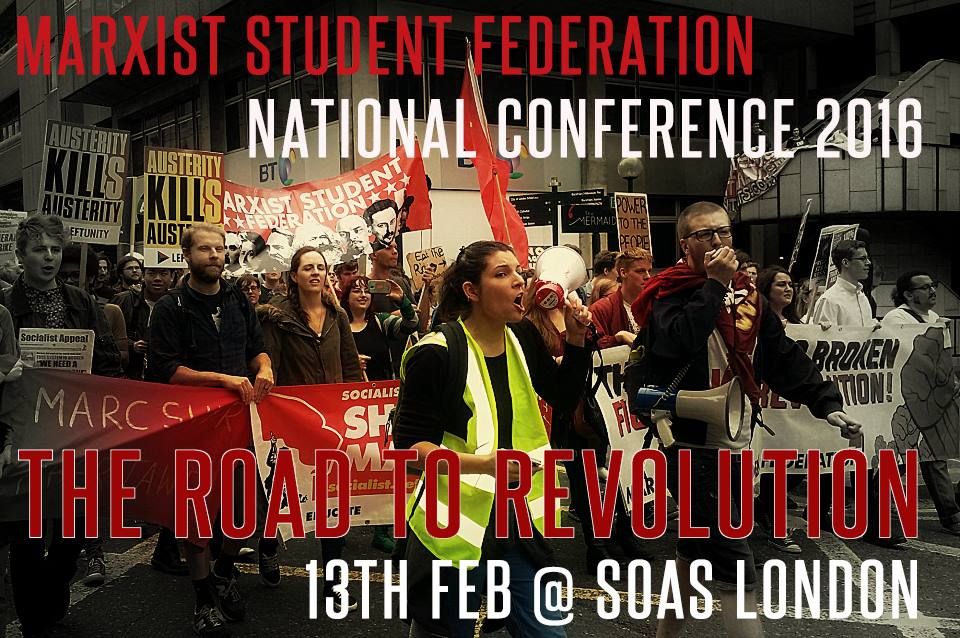 The 2016 national conference of the Marxist Student Federation will take place on Saturday 13th February in SOAS university, London. We encourage everyone who is interested in the ideas of Marxism and who would like to meet Marxist student activists from all over Britain to attend and participate in the debates and discussions.

This year’s conference is meeting at a time when the world is on the edge of a new economic slump. Diplomatic, political, and military crises are frequently sending shockwaves across the globe.

In Britain, the EU referendum is opening up divisions in the Tory party, while Corbyn and his supporters in the Labour Party are battling the Blairites in order to put forward clear socialist policies.

Meanwhile, as austerity is set to continue it is young people who are still bearing the brunt of the cuts, with the axing of maintenance grants for the poorest students being just the latest example of this.

There has never been a more important time for us to study the ideas of Marxism and the revolutionary history of the working class. Armed with these ideas and a plan for how to put them into practice we can fight for a revolutionary alternative to the system that is robbing us of our future.

The focus of this year's conference, therefore, will be to discuss what demands and programme socialists within the Corbyn movement should be arguing for, with specific discussions on the questions of economics, foreign policy (wars and migration), and defence (Trident and the armed forces).

In addition, we are delighted to welcome Dr Yannis Gourtsoyannis of the BMA Junior Doctors' Committee National Executive, who will be talking about the inspiring struggle of the junior doctors and the fight to defend the NHS from cuts and privatisation.

Delegates from all the groups affiliated to the Marxist Student Federation will be discussing, among other things, the future of the work of Marxist students in 2016, as well as amending and voting on the draft document (see below) which is being proposed to the conference.

The agenda for the conference (with links to recommended reading) is:

– A world on the brink: setting the stage for revolution

– The road to revolution: perspectives and reports (with a contribution from

Accommodation is available to those who need it on a first come first served basis.

Please email contact@marxiststudent.com for more information and to book a place at the conference.

This year has seen movements of students and young people all over the world, demanding an end to cuts, privatisations and austerity. In just the last four months of 2015 South Africa, Greece, Brazil, Italy, and the USA all witnessed massive youth mobilisations.

Everywhere young people have taken to the streets in the face of attacks from a whole series of governments, from Obama in the USA to Syriza in Greece. This assault on living standards cannot be reduced simply to a question of ideology. It has far deeper causes.

In reality these attacks are the product of a capitalist system that has exhausted itself. It is unable to provide a better life for successive generations. What young people are experiencing today is not a product of badly managed capitalism; this is the only life that capitalism has to offer our generation. As long as governments prop up the capitalist system they will be forced to carry out austerity, regardless of their political positions.

Students and young people in Britain must take this lesson on board. We support the demand to tax the rich, but we argue that in a crisis-riddled system managed by the rich for the rich we need to go much further. Likewise we support free education, but we recognise that under capitalism this will never be fully realised – to make this a reality something more is needed.

We therefore argue for a fundamental, revolutionary change in society. We fight for the overthrow of capitalism and its replacement with a socialist system based on democratic working-class ownership of the economy so that it can be planned in the interests of need and not profit. Only on this basis can we solve the social and economic problems that are causing the rebellion of young people all over the world.

The election of Jeremy Corbyn is a welcome step forward because he stands for an anti-establishment, anti-austerity programme that offers many people, particularly young people, hope for the future. Inevitably Corbyn is under attack from the Tories, the capitalist media and the right-wing of the Labour party because of his support for radical, socialist change. Marxists should participate wherever possible in the fight to defend Corbyn against these attacks, including by advocating the mandatory reselection of Labour MPs.

During his campaign for election as leader of the Labour party Corbyn put forward the idea of a National Education Service (NES). Marxist students should campaign for an NES that provides free education for everyone from cradle to grave, including:

These demands, if implemented, would put an end to exploitation under the capitalist system. They act as a bridge between a popular but ill-defined idea about what education should look like and a socialist society based on common ownership.

Corbyn’s political programme is generally good as it stands, but we should go much further. He is seeking a solution to the problems faced by working class people within the broken capitalist system. Marxists must highlight the lessons from Syriza’s experience in Greece, in which Tsipras was forced to give in to the blackmail of the capitalists. If you accept capitalism you must accept the logic of capitalism, and that logic requires austerity. The only solution is to break with the capitalist system.

Students and workers: unite and fight

The power to change society lies with the working class, which has never been more powerful than it is today. The proletarianisation of the middle-class, epitomised by the 98% vote for strike action by junior doctors in December 2015, is complemented by the falling living standards of students. School and university students are often forced to work to support themselves while studying. At University College London and other universities students are threatening rent strikes over the spiralling cost of living.

Students must ally themselves with workers to change society. Supporting strike action, attending picket lines and demonstrations, and spreading revolutionary ideas are all ways in which students can unite with workers. One concrete issue uniting students and workers that can be taken up by Marxists is the Youth Against Blacklisting campaign which aims to get blacklisting construction companies banned from university campuses.

The Tories recognise the potentially powerful union between students and workers and are cynically using the excuse of “terrorist threats” to implement their ‘Prevent’ strategy. This aims to divide students amongst themselves, to divide staff against students, and targets any students advocating “political change”. Marxists must campaign against ‘Prevent’ by arguing for a socialist solution to religious extremism, and for an end to racial profiling and the victimisation of political students.

The revolutionary road ahead

Capitalism is in turmoil. A new crisis of capitalism threatens to plunge the world into a new depression. Revolution and counter-revolution are on the order of the day. Our task is to prepare now for this new epoch that is opening up before us.

Theory is a guide to action and comrades in each Marxist society must consider how best it can apply the ideas of Marxism to the situation in which we find ourselves today. Campaigning for socialist policies, and building those campaigns with workers and students all over the country and internationally, is essential for spreading the ideas of Marxism.

The Marxist Student Federation is expanding and strengthening its forces year-on-year. If we continue to fight with clear ideas and an audacious approach Marxists will play a pivotal role in defining the future political landscape of Britain and the world.