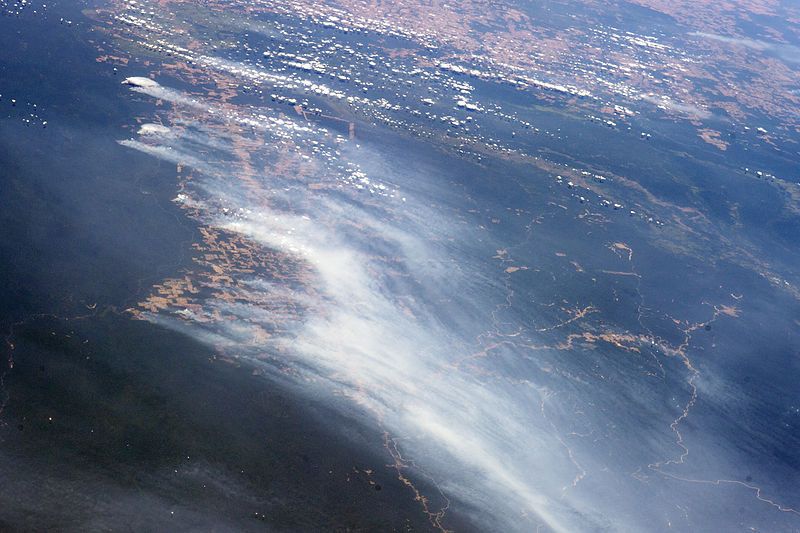 “Money is the universal self-established value of all things. It has, therefore, robbed the whole world – both the world of men and nature – of its specific value.” – Karl Marx (1843)

From space, in various satellite images, you can see columns of smoke and suspended particles ascending above the most extensive and biologically diverse tropical forest in the world: the Amazon.

Originally publish in Spanish on 30 August by El Militante |

Field photographs of ocelots, peccaries, armadillos and various species being incinerated have gone viral, horrifying civil society and inspiring groups of young protestors and environmentalists around the globe to take action. In a landscape recently turned into a savanna as a result of the deforestation of the jungle, a column of thick, black smoke provoked a desperate escape attempt by a mountain fox – a South American canine of the tropical and subtropical forest – though he perhaps had nowhere to run.

The tropical forest boasts a diverse array of mammals, birds, fish, amphibians, reptiles, and invertebrates not yet fully classified and quantified; not to mention the diversity of vascular plants, ferns, mosses, and fungi to be found per unit of forest floor. Even as one of the global biomes, and with numerous indigenous peoples and uncontacted groups living in isolation in the jungle, it is still subjected to the logic of capitalist production. The fire advancing rapidly over the south and centre of the Amazon was intentionally started by agribusiness and in aid of soybean production, which is responsible for the ongoing deforestation and loss of biodiversity. However, the number of fires is actually lower than at the beginning of the last century. The tropical forest can naturally dampen fires, due to the high concentration of moisture in the undergrowth under the canopy of large trees. The problem is that the fire, coupled with intensified destruction of the canopy, affects the ecosystem, and the forests become more arid and prone to be much more combustible. The situation is worsened due to the dry season in the southern hemisphere, which is experiencing a period of marked water stress.

In his almost eight months of government, Jair Bolsonaro, President of Brazil – a country that has the largest portion of the Amazon ecoregion (which is also distributed throughout Suriname, Guyana, southern Venezuela, Colombia, Ecuador, Peru and northeastern Bolivia) – has aimed at greater territorial liberalisation, and attacked policies to conserve the Amazonian biome, indigenous peoples and the region's resources.

Bolsonaro has openly confronted France, Germany, and Norway after these countries decided to block the financing channels of the Amazon Fund. However, France's president, Emmanuel Macron, has hypocritically spoken of the "internationalisation" of the Amazon, given its ecological significance and Bolsonaro's inaction over the fires. Both France and Norway make timely use of Brazil as a scapegoat, but have openly financed deforestation for the exploitation of gold and rare earth elements in the Amazon. Since 2015, Macron has intended to establish a large open-pit mine in the French colony of Guyana, in the northeastern portion of the Amazon ecoregion. Business has momentarily stopped, due to the great international pressure of various non-governmental organisations in defence of the environment.

In the current situation, the National Space Research Institute (INPE-Brazil) has accounted for more than 74,000 fire outbreaks so far in 2019. To a lesser extent, it is possible that some fires have been caused by the traditional agricultural technique of “slash-and-burn” (“queimada” in Brazil), which has even been used traditionally by indigenous peoples to burn areas destined for crops. This process also puts nitrogen in the soil that is beneficial for plantations. The use of fire in the Amazon, as in other ecoregions, has been a common practice for generations, and forest dynamics do not respond negatively to controlled fires. However, Bolsonaro's manifest policy, with the agribusiness and landowner lobby behind him, has promoted a drastic change in rainforest coverage, which can seriously impact its flora structure and ecology.

Capitalist exploitation of the Amazon, Chiquitania and Chaco

The free flow of capital inevitably leads to a greater concentration of wealth and assets into fewer hands, accompanied by a greater privatisation of land, to the detriment of local communities and peoples. Even if the capitalist exploitation of the Amazon was done in a more just way, this continual encroachment upon forest land would be counterproductive for humanity. There cannot be sustainable human development if biomes and biodiversity are destroyed.

Environmental systems such as rainforests are full of complex evolutionary, ecological and biological processes that are essential for human society. They contribute around 20 percent of the Earth’s oxygen supply (after the absorption of CO2) and also have a direct impact on pluviometric systems and the production of freshwater, because of the concentration of water vapour in vegetable mass.

Numerous endangered and endemic species (those that only exist within this ecoregion) inhabit the Amazon. Some large carnivores of Tropical America, such as the jaguar, have their largest populations in this region. Recently, new species of amphibians, fish, and even primates and sloths have also been described, groups that are particularly affected by the conversion of the forest structure.

The fire that devours the Amazon is advancing. This is due to the privatisation and opening up of forest land for redevelopment. Biological diversity is lost, but the fires also consume the cultures, languages, and worldviews of the various indigenous and rural communities who are reliant upon the forest. The fires have also been promoted in the Chiquitanía (a semi-deciduous forest in the central plains in Bolivia, the Gran Chaco in Bolivia and Argentina), which has been met with complete inaction by the crumbling government of Mauricio Macri; Secretary of Environment Rabbi Bergman (who tried to extinguish fires through prayer); and the gang of officials linked to agribusiness and the flight of capital. Fires have also affected most of the Pantanal reserve in Paraguay.

Social pressure has led to the urgent action of governments to put out the fires and assess environmental damage on the ground. The situation has also precipitated a meeting of various nations in the Amazon Cooperation Treaty (ATT), which was founded in Brazil on 3 July 1978 as a legal instrument to ensure the conservation and rational use of Amazonian resources. However, the isolationist stance of most of its member countries towards Venezuela (at the behest of the US) have not allowed this consortium to be maintained in recent years. This shows that these kinds of treaties have very limited utility when they conflict with the powerful economic interests of the ruling class.

The fires should be extinguished as soon as possible, but there should also be a prohibition on financial speculation (called benchmarking, in the Harvard business school) over the territories affected by the fires, which would need to be restored with the renewal of native species. Strikingly, even left-wing reformist governments such as that of Evo Morales in Bolivia have partially liberalised the land so as not to impede its monopolisation by large landowners and transnationals, and to allow the peasants to continue slash-and-burn practices. The inaction towards the advancing fire continued for days, until the Bolivian government finally took some measures, under strong national and international pressure.

It is necessary for youth and workers to continue their protests on a global stage in defence of the Amazon. The collective consciousness and pressure of indigenous communities, peasants, workers, and civil society as a whole, is the only force that can stop the right-wing Bolsonaro government and its allies. But in the days to come, the struggle must be for the abolition of capitalism. Because the fire that truly devours the Amazon, the Chiquitanía, and the Gran Chaco, and devastates their peoples, cultures, and worldviews, is capitalist exploitation.