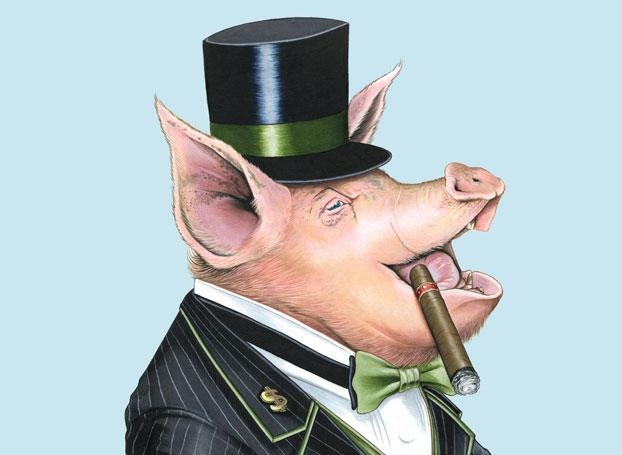 Almost everyone is involved from across the Establishment, the rich and the ruling class: current and former heads of state; business magnates; and celebrities. In the biggest data leak in history it has been revealed how the global elite make use of 200,000 shell companies created by the Panamanian law firm Mossack Fonseca to secure their money in offshore tax havens and to shield them from investigation.

This is not an amateur operation in the style of smugglers carrying suitcases full of money into Switzerland. Among those who have acted as middlemen for the elite we find some of the largest banks in the world, such as HSBC, UBS, Societe Generale and Credit Suisse.

On the one hand, the leak of all this information calls into question the system as a whole, and not just a few bad apples within in. At least 29 of the Fortune 500 companies (the largest corporations in the world) are included in the investigation papers. On the other hand, these latest revelations will come as little surprise to many ordinary people, who already have rock-bottom expectations regarding the behaviour of the rich and the elite after years of Establishment scandals and big business tax-dodging in all countries.

Reading the names of the people involved, we see how although political divides and temporary interests may sometimes cause collisions within the ruling class, their wealth always unites them. Thus we see that among the clients of the Panamanian law firm is the Ukrainian president Poroshenko, but also men tied closely to Putin. Offshore accounts were set up in the name of the father of British Prime Minister, David Cameron; the new Argentinian president Macri; the Saudi King Salman; the Emir of the UAE, Khalifa. The list also includes several senior officials of the Chinese Communist Party, plus the husband of the Chinese president Xi Xingping’s sister. The son of former UN Secretary General Kofi Annan even makes this list with an account in the Cayman Islands.

The total amount of capital managed by Mossack Fonseca has not yet been revealed, and perhaps never will be. According to the Panama Papers, a Putin man, Sergej Rodulgin, ran a clandestine money laundering scheme involving about two billion dollars. According to the Guardian newspaper, illegal capital flight from developing countries, often into offshore accounts of this kind, is equal to a thousand billion dollars a year and is growing.

The Panama Papers confirm that this system cannot be corrected or reformed. In 2008 the banking system in Iceland collapsed. The Icelandic banks were nationalised, but without challenging the market system in which they continue to operate. But who owns Wintris, an offshore company based in the British Virgin Islands, which has a claim of 3.5 million euros against the nationalised Icelandic banks (and the state)? Icelandic Prime Minister Svikmundur Davíð Gunnlaugsson, or more precisely his wife.

Within just 24 hours 21,000 Icelanders (out of a population of 320,000) have signed an online petition that calls for their Prime Minister’s resignation.

Of course Mossack Fonseca has defended itself by explaining that it was never involved in criminal activity because keeping an account abroad or in a tax haven is not a crime. This is a very crude defence, but it makes sense from a capitalist point of view. The Pakistani Information Minister, who intervened in defence of Nawaz Sharif, Prime Minister of Pakistan, who has been linked to the firm, said: "Everyone has the right to do what he wants with his assets: throw them in the sea, sell them, or put them in a trust. This is not a crime in Pakistani law nor in international law ".

Of course this is true, and as a result probably no one will be prosecuted for stashing money in these accounts in tax havens. In fact, under capitalism the possession of great wealth is not only normal, but is commended also. But from the point of view of the majority of the population, who are suffering under economic stagnation and austerity, it is absolutely despicable. While Nawaz Sharif stashes millions of dollars in Panama, 60% of the population of his country live below the poverty line, on less than two dollars a day.

Governments around the world not only protect, but are the direct beneficiaries of global financial speculation while cutting the welfare state, pensions, health, and education. With every new scandal politicians speak of "regulating the financial markets", but then, in practice, the state just acts as a committee for managing the common affairs of the whole bourgeoisie. George Osborne, the British Chancellor, has described tax avoidance as “morally repugnant” and yet over half of all the tax havens used by Mossack Fonseca are British-administered territories. David Cameron, the British Prime Minister is holding an international summit to tackle tax-evasion in London next month but has refused to answer questions about whether Mossack Fonseca schemes contributed to his family fortune.

Despite the scale of this leak, it still does not give the full picture. Mossack Fonseca is just one company that is part of a massive industry helping the 1% to build their fortunes by lying and cheating. The internal servers of dozens of other firms like Mossack Fonseca would make interesting reading and would likely implicate many more members of the global elite who are fortunate enough to have escaped embarrassment this time around because it wasn’t their lawyers who suffered a leak.

The tip of the iceberg

These revelations have a political dimension to them. The investigation of the leaked documents was carried out by the International Consortium of Investigative Journalists (ICIJ), based in Washington DC and funded by, among others the Ford, Kellogg, Carnegie and Rockefeller foundations, all of which have aggressively pursued the interests of the US ruling class over a long period of time. On top of that, the ICIJ receives support from the US Agency for International Development (USAID) which “Provides economic, development and humanitarian assistance around the world in support of the foreign policy goals of the United States” - in other words, it is part of the US government, working closely with the CIA.

The findings of the investigation focus heavily on the Russians involved in the scheme and their links to Putin. Assad also features heavily, along with his family members. And yet not a single US politician or capitalist is featured. As the most powerful and most corrupt ruling class in the world, it beggars belief that members of the US 1% are not avoiding tax at least as much as their peers in other countries. Wikileaks has condemned the fact that the ICIJ have not released all the documents from the leak so that gaps like this in the information released can be investigated.

It is possible that Mossack Fonseca’s US clients will have their details released at a later date so as to create maximum impact from the leak, or simply that the US ruling class use a different law firm to hide their cash. But it is also possible that the influence of a man like George Soros, who funds the ICIJ and who has also contributed millions of dollars to Hillary Clinton’s campaign for the democratic nomination, is being used to prevent the release of information that could provide an enormous boost to Bernie Sanders’ campaign.

In any case, the Panama Papers reveal once again that the powerful of the world are united in protecting their wealth and making it grow. The only alternative is to expropriate the wealth and place it under the control of the working class - the majority of the population. Simply put, it means fighting for a socialist society.