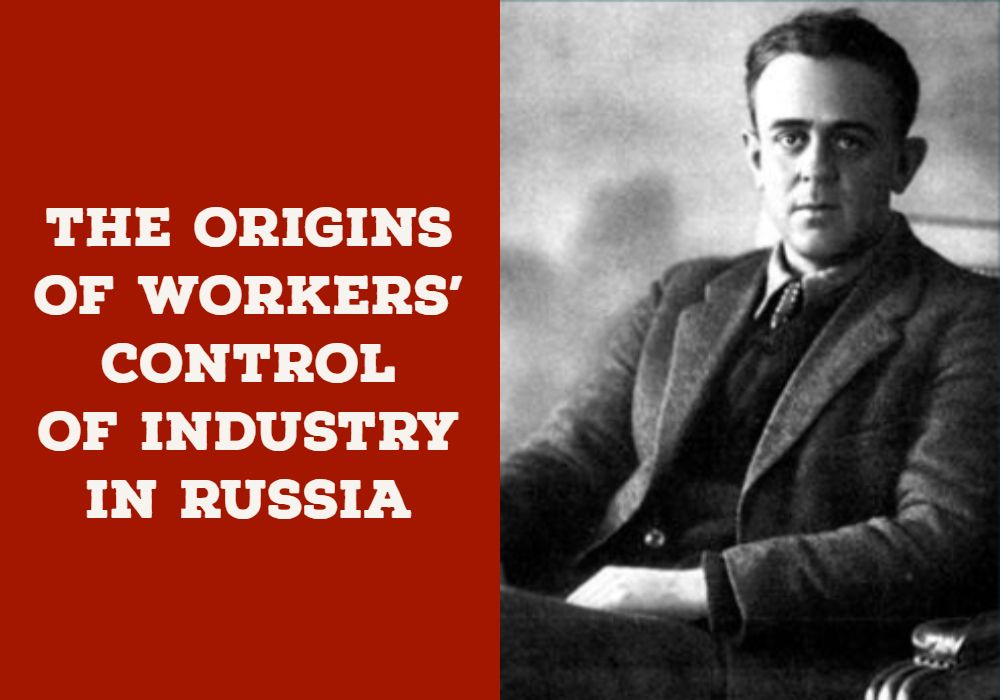 The following article was written when Reed arrived in Sweden in February last, on his way from Russia, in answer to false stories being circulated by the capitalist press about the management of Russian industries. Owing to a variety of circumstances it has not hitherto been published and now appears for the first time.

The capitalist press has diligently spread abroad all sorts of stories about the foolish conduct of the Russian industrial workers during the Revolution; of their extravagant demands, their ignorance, and the brutality with which they have treated manufacturers and technical experts. The outside world has received the impression that the Russian workingman gets enormous wages, refuses to work, and that in short he has ruined Russian industry.

It is true that in Russia industry is at a low ebb. In the first place, coal was impossible to procure for a long time, because Kaledine and his Cossacks had control of the Donetz Basin, and after them the Germans; machinery has deteriorated, owing to the fact that no new parts have come from abroad for two long years and more, and the technical experts, engineers, etc., faithful to the capitalist class, at first refused to submit to the direction of the workmen’s committees; and last of all, the working class itself has been too hotly absorbed in politics, and in fighting the enemies of the Revolution—from Kornilov to Kerensky, Kaledine, the Ukrainian Rada, Germany, the Czecho-Slovas and the Allies. But on the technical side, if Russian industry is ruined, it is the manufacturers and owners who are to blame—they who tried to starve the Revolution by shutting down the factories and mines, by ruining organization, wrecking the railroads, deliberately destroying the machinery of industry, and flooding the mines.

Many of the tales about extravagant labor demands, of workmen’s control committees which broke down. etc., are of course true. But the important thing is that till the November Revolution, the Russian workmen as a whole were still over-worked, underpaid, (except in certain special factories), and that at the same time there was growing up all over Russia a spontaneous industrial organization capable of being at least the promising frame-work of a new industrial order.

The three cardinal demands of the November Revolution were, Peace, Land to the peasants, and Workers’ Control of Industry, and of these three the last point of Workers’ Control was perhaps the mast important, because the tendency of new Russia is more and more toward the abolition of the political state, and the evolution of industrial democracy.

The history of labor organization in Russia is very brief. Before the 1905 Revolution no labor unions, in the strict sense of the word, existed. The only recognized workmen’s representation was the election of a starosta, or “elder", much as the starostas are elected in Russian villages, and even in Russian prisons, and with about as much power. In 1905, some 200,000 workmen joined the unions. Stolypin suppressed them. Some little unions persisted, but they were finally crushed, their funds seized, their leaders sent to Siberia. After that the unions existed half-secretly, with a membership over all Russia of about 10,000. During the war, however, all attempts at labor organization were ruthlessly stamped out, and workmen discovered in any connection with labor organizations were sent to the front.

The Revolution released the workers partly from this bondage, and pushed toward rapid organization. After four months of the Revolution the first conference of the Professional Unions of All-Russia was held—200 delegates representing more than 1,400,000 workers. Two months later the membership was calculated at more that 3,000,000, according to the report of Riazonov; it is now more than double that number.

Nor these Professional Unions (Professioalne Soyuse) were modelled on the French syndicate, with the addition of government co-operation suggested by the German labor-union system. They were mainly concerned with the fight for shorter hours, higher wages—in short the routine business of labor-unions everywhere. For instance, they established a system of Conciliation Chambers for the hearing of industrial disputes—for industrial arbitration under government supervision. But their important work was the organization of all the workers into great industrial unions, in the dissolution of all the petty craft organizations, merging them into the big unions. Thus in the Government gun-factory st Sestroretzk, for example, all those who worked upon the manufacture of rifles—the men who forged barrels, the machinists who fitted the mechanism, the carpenters who made the stock—all were members of the Metal-Workers’ Union.

But the professional Union, in spits of their importance, occupied a secondary position in the workers’ minds. In the first place, the Soviets, half-political, half-economic, absorbed their energies; in the second place, those unique organizations spontaneously created by the Russian Revolution, the Factory Shop Committees (Fabritchnoe Zavodski Comitiet) required their attention. These latter are the real foundation of the Workers’ Control of Industry.

The Factory Committees originated in the government munitions factories. At the outbreak of the revolution, most of the administrators of the government factories, chiefly military officers who brutalized the workers all the privilege of military law, ran away. Unlike the private manufactures, these government officials had no interest in the business. The workers, in order to prevent the closing down of the factory, had to take charge of the administration. In some places, as at Sestroretzk, this meant taking charge of the town also. And there government plants were run with such inefficiency, so much corruption, that the Workers’ Committee, although it raised wages, shortened hours, and hired more hands, actually increased production and reduced expenses—at the same time completing new buildings begun by dishonest contractors, constructing a fine new hospital, and giving the town its first sewerage system. With these government plants the Factory Shop Committees had a comparatively easy time. For a long time after the Revolution there was no authority to question the authority of the workers, and finally when the Kerensky government began to interfere, the workers had complete control. Working as they were on munitions, with standing orders, there was no excuse for closing down, and in fuel and raw materials the government itself supplied them. Although many times under the inefficient Kerensky government the government shops were in danger of closing down, and the Shop Committee had to send their delegates to Baku to buy oil, to Kharkov for coal, and to Siberia for iron.

From Sestroretrk the Shop Committee spread like wildfire to other government shops—then to private establishments working on government orders, then to private industries, and finally to the factories which were closed down at the beginning of the Revolution. First the movement was confined to Petrograd, but soon it began to spread over all Russia, and just before the November revolution took place the first All-Russian Congress of Factory Shop Committees. At the present time, representatives of the Factory Shop Committees and representatives of the professional Unions make up the Department of Labor of the new government and compose the Council of Workers’ Control.

The first Committees in the private factories were vainly engaged in keeping the industry going, in the face of lack of coal, of raw materials, and especially, the sabotage of the owners and the administrative force, who wanted to shut down. It was a question of life and death to the workers. The newly-formed Shop Committees were forced to find out how many orders the factory had, how much fuel and raw material were on hand, what was the income from the business—in order to determine the wages that could be paid—and to control itself discipline of the workers, and the hiring and discharging of men. In factories which the owners insisted could not keep open, the workers were forced to take charge themselves, and run the business or well as they could.

Some of the experiments were very interesting. For example, there was a rotten factory in Novgorod which was abandoned by its owners. The workers—inexperienced in administration, took charge. The first thing they did was to manufacture enough cloth for their own needs, and then for the needs of the other workers in Novgorod. After that the Shop Committee sent men out to factories in other cities, offering to exchange cotton cloth for other articles they needed—shoes, implements; they exchanged cloth for bread with the peasants; and finally they began to take orders from the commercial houses. For their raw material they had to send men south to the cotton-growing country, and then with the railroad employees’ union they had to pay with cloth for the transportation of the cotton. So with fuel from th e coal mines of the Don.

In the greet private industries which remained open, the Factory Shop Committees appointed delegates to confer with the administration about getting fuel, raw material and even orders. They had to keep account of all that came into the factory, and all that went out. They made a valuation of the entire plant, so as to find out how much the factory was worth, how much stock was held, what the profits were. Everywhere the workers’ greatest difficulty was with the owners, who concealed profits, refused orders, and tried in every way to destroy the efficiency of the plant, so as to discredit the workers’ organizations. All counter-revolutionary or anti-democratic engineers, clerks, foremen, etc, were discharged by the Factory Shop Committees, nor could they enter any other factory without the recommendation of the Factory Shop Committee of their preceding place of employment. Workers were required to join the union before they were hired, and the Factory Shop Committee supervised the carrying out of all union scales and regulations.

Each Factory Shop Committee has five departments: Production and Distribution, Fuel, Raw materials, Technical Organization of the Industry, and Demobilization (or changing from a war to a peace basis). In each district, all the factories of one industry combined to send two delegates to a district council and each district council sent one delegate to the city council—which in turn had its delegates in the All-Russian Council, in the Central Committee of the Professional Unions and in the Soviet.

This method of controlling production by the workers, sprung spontaneously from the Russian revolution, has just been legalized by the new Workmen’s and Peasants’ Government of the Russian Republic. Also it has become possible, through the power of the government for the workmen themselves to take over and operate all plants those owners cannot keep them open. With unlimited credit behind them, and the huge, organized force of the government, there is no reason why the workers cannot hire engineers and technical staff, or why, with such training, they may not be able, in a few years, to take over the greater part of Russian industrial enterprise. With the control of the means of production and distribution in the hands of the popular government the main obstacle to the achievement of industrial democracy has vanished.