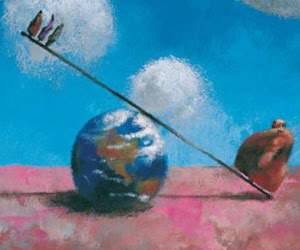 Anyone struggling to make ends meet, trying to survive from one payday to the next, will be amazed to discover the we are now at the “peak of the second Gilded Age”. These words are those of Josef Stadler, the Global Head of the Ultra High Net Worth division at UBS, commenting on a report on the way that the wealth of the rich has risen over the last period.

The Gilded Age phrase is a direct reference to the period at the end of the 19th century when “robber-baron” families in the USA conspired to accumulate huge amounts of wealth on the back of a massive and brutal exploitation of the American masses.

Stadler confirms that today “wealth inequality is at its highest since 1905”. The report from UBS and PwC outlines that, after ten years of austerity cuts for working class families, the wealthy elite are just pocketing more and more. The world’s billionaires have increased their combined global wealth by a fifth over the last year, accounting for a total holding by these rich few of £4.5 trillion pounds.

Compare this to how things are for the rest of us. The British Institute for Public Policy Research (IPPR) has produced data which confirms what we already know: that we have gone through a “lost decade”. Overall, wealth inequality across the country is now twice as great as income inequality, which is saying something.

Tellingly, the report confirms that the prospects for each new generation are now worse than those of its predecessors - a historic first.

Ironically, for a party that once claimed to be the party of home ownership, the Tories are now presiding over a collapse in the numbers of young people owning their home. In fact, home ownership has been in sharp decline since 2000, with the largest fall being amongst 25 to 34-year-olds, where it has fallen from 59 per cent in 2003 to 37 per cent in 2015.

Carys Roberts, research fellow on the IPPR Commission on Economic Justice, stated that:

“Our work has found that the vast majority of people now expect young people today to have less than the previous generation in housing wealth and savings, and more debt…The old social contract in which each generation could expect more wealth than the last is broken.”

Clearly things are not getting better. According to the Social Mobility Commission, a quarter of all people on low pay have remained trapped at this level over the last decade, with a further half “fluctuating” in and out of such employment. With zero-hour contracts on the rise, this will only get worse.

No wonder that Josef Stadler, having looked at the new Gilded Age, feels obliged to warn the rich that such inequality could lead to a “strike back”. Indeed it will. Just as the robber barons soon found themselves facing strikes, protests and ultimately revolution, so too will the ultra-wealthy parasites of today start to face the wrath of the people.

Such anger needs a focus - and that focus must be the fight for socialist policies. Only through a planned economy under workers control can such gross inequality and exploitation be done away with.

Labour needs to address this, not with words but with deeds, starting with the nationalisation of the monopolies, banks and finance houses in order to carry out a fundamental transformation of society. This is the task of our age, gilded or not.