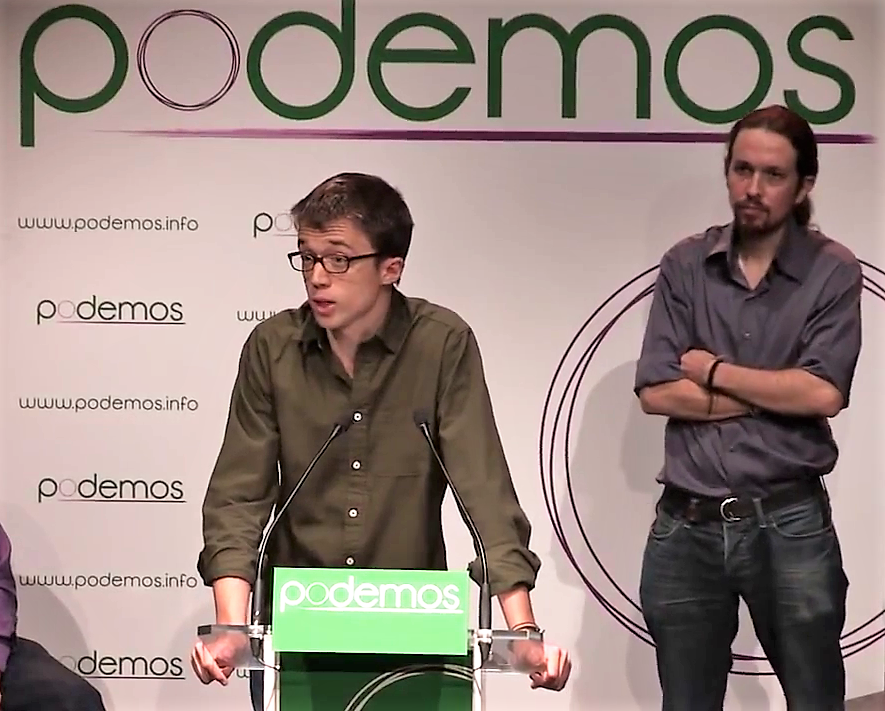 The second statewide Citizens Assembly (Vistalegre II) has a tremendous importance for Podemos and the Spanish left. It is by no means an accident that the event has been accompanied by increasing polarisation between the positions of comrades Pablo Iglesias and Íñigo Errejón.

A balance sheet of the first Vistalegre assembly

The fact that an open division about what strategy and tactics to pursue has emerged in the original leading nucleus of the organisation, demonstrates that the political and organisational conclusions drawn from the founding Citizens Assembly (Vistalegre I) have proven to be false.

The thesis that the socio-economic crisis was merely a temporary phenomenon and that the task thus facing us was one of immediately winning the elections at any cost before the regime recomposes itself, led to a moderation of Podemos’s discourse and programme. Hence the vacillations and the zig-zags from left to right, which have left a large part of the membership, and actual and potential voters disoriented.

In fact when the language used by Podemos took on a more left-wing hue, the party was able to win positions and electoral support, as was the case in the general elections on the 20th December 2015, only to lose it when they shifted to the right and took on a more moderate posture so as “not to frighten” the middle classes, as happened during the general elections of 26th June 2016 (“26J” as it is known in Spain).

With the argument of building an “electoral war machine”, a rigid apparatus with bureaucratic tendencies was created, which has been harassing comrades with more left-wing views. Political debate and decision making has remained concentrated in the hands of the organisation’s leadership, with local circles being emptied of political discussion and thousands of activists drifting away.

There were tactical errors prior to 26J, such as not having been able to convince a sufficient part of PSOE’s core voters that its leaders would prefer a PP government than ruling alongside Podemos-IU, as has now been proven to be the case. By failing to call a Podemos-IU led popular mobilisation demanding such a government, thus dispelling any doubts, the Socialist leadership were given the opportunity to present the proposal of a PSOE-PODEMOS-IU government as a mere manoeuvre, falsely blaming us for the continuation of the right-wing government. This in itself demonstrates – contrary to the opinion of comrade Errejón – that the left-right divide continues to be the main consideration in the political sympathies of working people, as they correctly see it as the line dividing rich and poor; bosses and workers; the restriction of democratic rights and their extension.

In the end the need to expand electoral alliances to the left on a statewide level was recognised in the face of 26J, although in the case of IU this was done late and badly.

The thesis of comrade Errejón

The positions confronting one another – that of Iglesias and Errejón – express, in the last analysis, the pressures of the different social classes in society, as is the case in any profound and intense political debate.

Comrade Errejón is very clear to whom he is directing his message. In his document Recuperar la ilusión [Restoring Hope] he poses the need for an orientation towards the middle classes and calls for the moderation of both the image and language of Podemos, with “cross-cutting proposals, neither of the left nor of the right”. He treats the left with contempt, describing it as “folkloric and impotent” and presents a vulgar caricature of Marxism, without mentioning it by name, arguing that Podemos should be against “those who believe that positions in history are fixed by the economy.” He also makes clear his contempt for popular mobilisations: “Historically nothing frightens the people at the top less than the protests of noisy minorities”. And, this in the country of 15M and the Indignados! Where between 2012 and 2013 alone there were two general strikes and 130 daily protest actions, which created the very conditions for the emergence of Podemos!

According to comrade Errejón’s tendency we can find points of agreement that everyone can come together on: workers, the middle classes, the bosses, all for the purpose of “rewriting a social contract”.

His reasoning is simplicity itself. If we can succeed in pleasing all the social classes, if put forward the idea of uniting for the love of the fatherland and the nation, then we can all live happily in the happiest of all possible worlds. In this way everyone will vote for us: the poor and the rich, the businessmen, the workers and the youth; don’t you see that it really is that simple?

It’s no accident that comrade Errejón receives regular praise from the leaders of PSOE, the PP and the media of the regime. He himself complains about this. But are these not the very same right-wing leaders of the PSOE, the PP and Ciudadanos who also argue that leftism is out of date? Do they not argue, with the same ardour as comrade Errejón, in favour of “people’s unity” and of the fatherland? Let us be clear; there are no common interests between bosses and workers, between rich and poor, like the fatherland or the people. It only serves to hide the class interests and the domination and exploitation in society by big businessmen and bankers.

The ideas represented by Errejón’s tendency are nothing new. They are akin to those imposed by Felipe González in PSOE against the Marxist wing in the late 70’s in order “to win the middle classes”. If they succeed at Vistalegre II, they would lead Podemos to disaster, towards an ideological overlap with PSOE and Ciudadanos, and to the frustration of the expectations for a real change held by millions of workers, youths and of the exploited in our country. In addition it would lead to an internal “state of emergency” being imposed against anything that smells of leftism, radicalism or socialism.

The pre-assembly debate has disgusted many militants. The documents of the main tendencies (Pablo Iglesias, Íñigo Errejón, Anticapitalistas) were only distributed to members 3 weeks prior to the Citizens Assembly itself. The circles are unable to amend them. Militants and circles are able to present their own contributions on political and organisational questions and vote on them, but such votes are non-binding!

Apart from everything else, the schedule of the debate has been confusing and information has arrived in an incomplete form to the circles. For this reason only the most active nucleus of the organisation has had the opportunity to evaluate the content of the different proposals, contributions and documents in detail.

Now Iglesias and Errejón renege on the organisational model of Vistalegre I. This is not very credible in the case of Errejón. It was from amongst his supporters that the apparatus was organised through the ex-secretary of organisation Sergio Pascual – removed by Iglesias months ago – and which demonstrated a tremendous disdain for the rank and file. Although we share his criticism of granting special powers to the General Secretary (such as that of unilaterally calling referenda amongst the membership), it is not organisational questions which determine our support or lack thereof for this or that tendency but the political questions.

We have already explained our complete rejection of the positions and the list proposed by the camp of comrade Errejón, which represents the right wing of Podemos.

The other two currents (that of Iglesias and Anticapitalistas) better reflect the Podemos that the working class needs, maintaining their support for left-wing unity, and positioning the motor force of their politics in social mobilisation in opposition to the institutionalism of Errejón’s camp. Both, therefore, have our sympathy.

For an agreement of the “left” against the “right”

Apparently, from an ideological point of view, there do not appear to be substantial differences between Pablo Iglesias and Íñigo Errejón. Neither pose an alternative that goes beyond capitalism, both defend a narrow nationalism and their programs are limited to a series of progressive reforms.

Nevertheless, whilst Errejón and his followers have proven to be hyper-sensitive to the disciplinary whip of the ruling class, Iglesias’ camp, by resting on the most dynamic section of the working class and the youth, leave the door open to being influenced by them, to progressing along an evolution according to the development of the class struggle that could lead, down the line, to the formulation of socialist conclusions, although in an incomplete and insufficiently developed way.

The position of Anticapitalistas is further to the left, albeit with a high degree of ambiguity, as they do not argue openly for the adoption of socialist measures against big capital by a hypothetical, future Unidos Podemos government.

Nevertheless, the onslaught of the right-wing led by Errejón is very strong, and counts on the sympathy of the regime’s media. The presentation of two separate “left” lists could grant victory to the “right” and ensure its majority on the leadership.

For this reason we urge the unity of both wings. If the comrades of Anticapitalistas consider it impossible to amalgamate their political document with that of Iglesias, they have sufficient weight and means to make their proposals known to the rank and file via multiple channels. What this is about is ensuring the continuation of a Podemos oriented to the left and based on the working class and other excluded layers of the population; not of making a show of one’s weight in the party’s apparatus.

If such a unity is not forthcoming, we urge the gathering of the vote around that wing with the greatest possibility of beating Errejón’s camp – that of comrade Pablo Iglesias – and for the future leadership body of the party to be based upon the unity between both left wing currents.