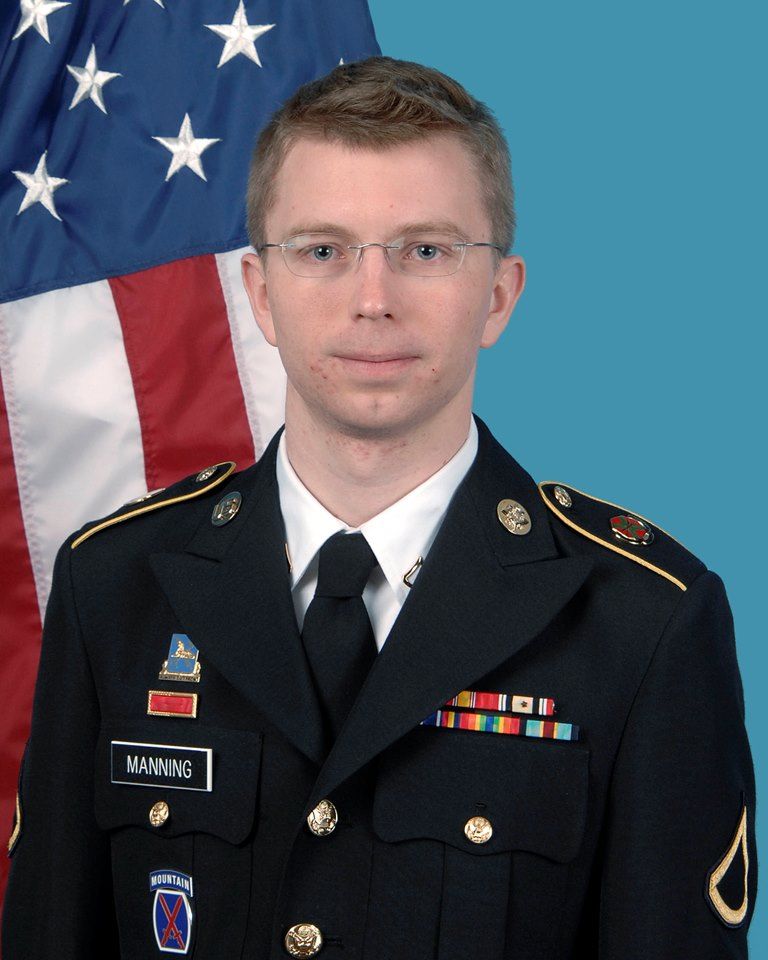 On August 21, the presiding judge in the case against Chelsea Manning read the sentence at the end of the court martial. Chelsea Elizabeth Manning—previously, Bradley Edward—was sentenced to 35 years in prison with a dishonorable discharge. What was her crime?

Giving more than 700,000 classified military documents and diplomatic cables to WikiLeaks so that they could be shared with the world. Who is Chelsea Manning and why has she become a household name the world over? What arouses such wide sympathy for her and such deep animosity on the part of the US ruling class?

Manning was born in 1987 in Oklahoma to an American father and a Welsh mother. When her parents divorced at an early age, she moved with her mother to Wales. She moved back to the US to live with her father in 2005, and got a job with a software company in Oklahoma City.

Her real story begins in 2009, when she was assigned as an intelligence analyst to an Army unit near Baghdad, Iraq. Manning’s first years in the army coincided with the beginning of the economic crisis and also the beginning of the Obama presidency. It was the time when a new generation of young Americans was becoming radicalized. It is not an accident that both Edward Snowden and Manning are of a similar age.

US authorities would like the public to think of Manning as someone with deep psychological problems, the idea being that the reason she leaked the information was her mental problems. Particularly after the announcement of her desire to identify as female and to undergo gender transition, this aspect of the story has gotten more attention. Clearly, the US establishment believes that the only people capable of telling the truth about the atrocities of US imperialism in Iraq and Afghanistan are those that are insane! This has been intensified by recent “leaks” about Manning allegedly being mentally unfit for military service in 2008–9.

In Iraq, Manning was witness to the hell that the imperialist armies had made of the country. She was also given access to government databases and much classified information, as well as videos of the atrocities that were being committed. Apparently, her fellow soldiers used to watch these videos for entertainment. Manning was, however, clearly shocked and decided to leak the videos instead.

Manning’s first contact with WikiLeaks came in January 2010. She had downloaded 400,000 documents that became known as the Iraq War logs, and a further 91,000 documents from the Afghanistan database (the Afghan War logs.) She copied these into her MacBook and wrote a message intended for the Washington Post. She took the information with her to the US later that month, during a short holiday. She tried to contact the Post and New York Times, but they weren’t interested. So she passed on the information to WikiLeaks, which was to dramatically change everything.

The material she had shared with the world was significant. It included never-before-seen videos of a July 12, 2007 Baghdad airstrike, and the 2009 Granai airstrike in Afghanistan, which showed many civilians brutally killed. Hundreds of thousands of pages of diplomatic cables and Army reports showed to the world the cynical hearts of the imperialists and their dealings with each other and their henchmen in the region. It was not a surprise then that this was followed by all the hounds of imperialism attacking WikiLeaks and hunting its founder, Julian Assange, who has had to hide in the Ecuadorian embassy in London in fear of the “democratic” police of the Western countries that have been relentlessly after him. Senior figures in the US Republican Party have even called for his execution or assassination!

Manning was arrested in May 2010, and the Army charged her with 22 offences, including the infamous “aiding the enemy.” She suffered brutal treatment for almost a year at the Marine Corps Brig in Quantico, Virginia. With the excuse of “prevention of injury to self,” she was cut off from the world, held in solitary confinement, and subjected to sleep deprivation and other kinds of torture. In April 2011, she was transferred to Fort Leavenworth, Kansas and more than two years later, she was convicted and sentenced.

Taking a stand against your own ruling class is a very difficult step to take. Most of the time, the ruling class will get away with such acts. These are not ordinary times, however. There is a growing suspicion, anger, and even hatred on the part of the American working people toward the ruling class. More and more American workers are asking themselves: how come our labor has created the most successful accumulation of wealth in human history, and yet we face unemployment, poverty, sickness, and squalor? How come there are billions of dollars available to defend the interests of the rich in the Middle East and around the world, but not enough to guarantee decent housing, welfare, and full employment in the US?

This is laying the basis for a new wave of anti-imperialism in America itself. People like Chelsea Manning and Snowden are symptoms of a regime in crisis, of a widespread questioning of imperialism within US society itself. These individuals’ revelations about the inner machinations and intrigues behind the imperialist façade did a great service to the workers and oppressed of the world.

However, while individual acts of bravery and defiance can help open eyes and inspire people to follow their conscience, in the final analysis, only mass action by the working class can end capitalism: the root of all of the main problems plaguing humanity. Only when the working class moves to take political and economic power into its own hands can we live in a society of genuine democracy and abundance, free from war, poverty, and discrimination.