We are publishing the text of a leaflet produced by a sympathiser of the IMT in Taiwan and aimed at the students there, which explains what the Tiananmen movement in 1989 was about, how it was destroyed and what workers and students in both China and Taiwan should be working towards today.

The last decade of the previous century marked a general collapse of Stalinist states. It was also a time where the world masses took a further step towards demanding more democratic rights. Against this background, China exacerbated its internal social contradictions via economic reforms (that is to say, the transition to privatisation). The economic crisis brought forward by the reforms in the 1980s ignited the Chinese people's general will to oppose the dictatorship of the bureaucracy, which gave rise to a widespread and thunderous social movement. Yet, this movement was trampled under the tanks of the CCP on the morning of June 4th, 1989. Was the movement behind “June 4th” a pursuit for capitalist democracy? Was it a defence of the interests of the people? Or was it a “counterrevolutionary riot”, as the CCP regime claims? What exactly was this movement?

Predecessors of June 4th: from the 1986 student protests to the Democracy Wall Movement

As Deng Xiaoping took reign over the People’s Republic of China in 1979. He immediately began to promote the so-called “reform and opening up” measures, i.e. the transition from public ownership of production to privatisation. Within the CCP bureaucracy and intellectuals, a demand to adapt the political system to the new economic foundations via the institution of Western-style democracy began to rise. The “reformists”, headed by Hu Yaobang, introduced political reforms in the mid-1980s that represented a small step towards Western-style democracy, i.e. bourgeois democracy, but this was never to materialise into a serious movement in that direction.

In 1986, students of the China Science and Technology University in Hefei, Anhui Province protested against the CCP’s interference in the grassroots election of Hefei’s delegates to the People’s Congress. They called for a boycott of elections and for a struggle for democratic rights, which gained a following in many universities across China. This movement ended with the regime agreeing to open a dialogue with the students, as well as the release of several arrested students by the Beijing Police.

In 1987, the “Democratic Wall” Movement erupted in Beijing. Wei Jingsheng, a local electrician, posted a big character poster calling for “a fifth modernisation,” at the “Democracy Wall” in Xidan, for which he was imprisoned. This incident again reflected the deep desire from within the Chinese masses to reclaim democratic rights after years of being robbed of political power by the bureaucracy. In reaction to this, a movement based primarily on student intellectuals began to brew: they would wield slogans for privatisation and capitalist democracy as weapons, and aim their sights on the CCP regime.

Rise of the student movement and support from the working class

On April 5th, 1989, the liberal CCP grandee Hu Yaobang died of a heart attack. People spontaneously hosted a vigil at the Tiananmen Square. As the crowds gathered, the intellectuals present began to call on the masses to move, and the gathering escalated into a movement that spread to other cities. Students from major cities took to the streets demanding the CCP enforce political reforms. They pointed straight at the CCP’s problem with corruption. On the 20th of April, the news of the Xinhua Gate Bloody Incident, where the police brutalised the students, further instigated students to stage walkouts. More and more students began to join the movement. 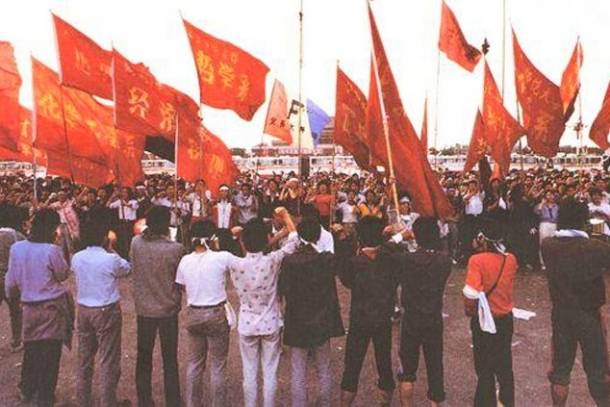 Student organisations such as the Federation of Autonomous Higher Education Schools began to mushroom. The People’s Daily published an editorial entitled “Clear Banners Against Riots Must Be Raised” on April 26th. Hawks such as Deng Xiaoping and Li Peng saw the student movement as an anti-Party riot, but the students did not back down. At the end of April and beginning of May, more students answered a call to commemorate the May Fourth Movement and took to the streets despite being banned from doing so. Student leaders such as Wang Dan used the occasion of Gorbachev’s visit to China on May 13th to stage a hunger strike. Ideological cracks started to emerge within the rank and file of the CCP. Some regional Communist Youth Leagues even supported the movement at Tiananmen Square. From May 16th to 26th, over 180,000 students from outside Beijing streamed in to support the waning Beijing students.

On May 18th, the Beijing Autonomous Workers’ Federation (BAWF) was established. The working class started to replace the role of the students, who were growing tired. It issued the “Declaration of the Capital City Workers” on May 19th, demanding the government enter into dialogue with the students, and even organised the BAWF dare-to-die corp to protect the students. On May 20th the government declared martial law, and BAWF responded by holding a general strike throughout Beijing. This rejuvenated the movement that was initially in decline, and was transforming the student movement into one that involved the rank and file of all of society.

But the student leaders were unwilling to work with the workers, as the students’ programme demanded full privatisation as the only means to resolve China’s problems. Yet it was precisely privatisation that caused the hyperinflation and massive corruption. The position of the BAWF, on the other hand, was closer to the democratic tradition of socialism. They sought to defeat the CCP bureaucracy, while chanting the slogan: “The working class must lead the People’s Republic of China. We have the right to kick out all dictators.” Although the two sides had disagreements, they maintained a certain level of cooperation during the movement.

The repression by the CCP bureaucracy

On the dawn of June 4th, the “People’s Liberation Army” troops mobilised after the declaration of martial law and entered into the metropolitan area of Beijing. Unlike the previous troops, with whom the masses were able to fraternize and neutralize, these PLA troops opened fire on the Chinese people. The people who built roadblocks at Muxidi on the evening of June 3rd who were trying to dissuade the troops were faced with live ammunition, leading to significant loss of life. The troops continued to push into the Tiananmen Square, leaving the dead and injured in their path. Some citizens and protestors threw stones or Molotov cocktails at the troops and initiated battles for self-defence.

Yet, the students leaders opted to maintain the “peaceful nature” of the movement and moved to disarm the masses. The defenceless masses would finally be met by the PLA driving into Tiananmen Square at dawn on June 4th. The CCP shot down the independence of the working class, the political desires of the students, and murdered the hope for the Chinese masses to win more rights for themselves. They immediately cleaned up Tiananmen Square the day after, and branded the movement as a “counter-revolutionary riot.” Although subsequently workers and students worked together to stage strikes and walkouts in places like Wuhan, they were quelled by the military. Students and families of the victims were prevented from approaching the heavily fortified Tiananmen Square.

Conclusion: why should we commemorate June 4th?

Workers must unite all across Asia and beyond for the liberation of humanity / Image: Michael Mandiberg

The June 4th Movement reveals not only the abstract conflict between democracy and dictatorship, but also a historical experience whereby the Chinese intellectuals and the working class can re-examine a way forward against the backdrop of a global pursuit for democratic rights by the masses. An acknowledgement and analysis of this experience can help us more accurately understand what the CCP regime today represents, which leads to a call for the Chinese masses to continue their struggle. After June 4th, the CCP retracted a relatively open attitude and instead stressed the “party’s leadership.” In the decades after, we saw an economic rat-race towards capitalism in China, forming the so-called “oligarchical capitalism” we see today.

These historical questions and phenomena, which have been repeatedly posed, cannot be dismissed as “none of my country’s business.” This kind of attitude is not only foolish, but extremely dangerous. The present CCP regime not only no longer represents in any way the interests of the people, but it stands on a bureaucratic apparatus implementing dictatorship over the Chinese people. These bureaucrats cannot make any concessions that would damage their own interests. All the “developments” that took place after the “reform and opening” period were only “developments” for the bureaucrats and the new-born capitalists.

Workers and toilers of Taiwan, you have won the democratic rights you enjoy today from struggling against the dictatorial bosses and their politicians. Today, the imperialist “CCP” seeks to take them away in the name of profit, while the US imperialists use us as a pawn for their own interests. We have more in common with the Chinese workers than we do with the Taiwanese corporations and billionaires. In recent times, we’ve seen renewed courage from the working class across the Taiwan Strait in fighting the bosses and their capitalist system. It is high time for us to struggle, shoulder to shoulder with the Chinese working class, and defeat the pro-capitalist CCP regime together, overthrow capitalism in China and beyond, and fight alongside workers across East Asia to establish a new society that genuinely carries forward the democratic traditions of socialism.