Workers in Port Talbot have been shocked by the decision of Tata management to sell off its steel plant. Workers in other areas have also been affected. Despite all the sacrifice and hard work put in by the workers, they have been once again rewarded with a kick in the teeth. The pain in the community cannot be overstressed, with the century-old industry on its last legs.

Earlier restructuring by Tata in January has already resulted in 1,000 job losses, with 750 from Port Talbot itself. Now a further 15,000 jobs are under threat, including 5,500 in Port Talbot - with thousands more potentially affected indirectly in other industries - as a result of Tata's announcement that they will be selling off their UK business.

First under British Steel, then Corus, then Tata: the industry has suffered decades of decline. The backbone of British manufacturing has been slowly strangled at the behest of the market. Like the coal industry, it is being sent to the wall, with all the pain that this causes in those communities based upon steel.

Unfortunately, in the past, British Steel, although nationalised, was run on capitalist lines. It sustained 230,000 jobs, but this was drastically reduced through privatisation to around 25,000. But 4,000 jobs were lost last year alone. This new round of cuts will leave Britain without a steel industry.

Steel is the basis of all modern economies. Even Belgium and Italy gave subsidies to its steel industry, but this seems to have fallen foul of the EU regulations. The Tories have simply hidden behind such EU restrictions to do nothing and allow "market forces" to take their toll. 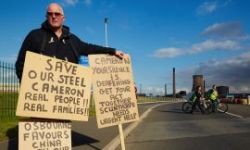 The Tata bosses are weeping that they are loosing £1 million a day. But this is not the fault of the workers who produce steel. It is the overproduction of steel on a world scale that has pushed prices down. Once again, it is a reflection of the world crisis of capitalism - a system based upon production of profit alone. Like all capitalist firms, that is all they are interested in: the profits of shareholders and not the livelihoods of ordinary people.

The government are seeking a private buyer, but what capitalist would buy a massive loss-making business? The only people interested would be asset-strippers, who would gut the industry, throwing thousands more onto the dole.

The only way out is through the nationalisation of the steel industry, as has been mentioned by Jeremy Corbyn. Private ownership has proven its bankruptcy, as in countless other sectors. But rather than pay millions in compensation to the bosses, there should be no compensation. Big business has bled the industry for too long! If they are losing £1 million a day, they should be happy to get rid of it.

As many workers have commented, the government was quick to bail out the banks with billions of public money and take them into public ownership - so why not steel? At least steel production plays a "socially useful" role, unlike the casino gambling taking place in the City. 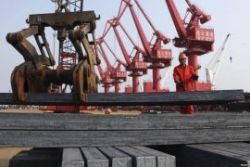 With their attempts to avoid economic crisis in 2008 through a massive Keynesian programme of government stimulus, the Chinese government has greatly exacerbated overproduction in a multitude of sectors. "In industry after industry, from paper to ships to glass," the Economist reports (27th Feb 2016), "the picture is the same: China now has far too much supply in the face of shrinking internal demand."

The current steel crisis is the most acute expression of this process, as the Chinese government - through their interventions - exports its contradictions and unemployment across the world. The OECD estimates that China alone has an "excess capacity" - i.e. overproduction - in steel production of 400 million tonnes, twice the size of the entire EU steel output.

The root of the problem, however, is not Chinese state intervention, but the anarchy of the world capitalist system. Indeed, as the Guardian reports, even Chinese workers are not safe from the crisis, as "China expects to lay off 1.8 million workers in the coal and steel industries, or about 15% of the workforce, as part of efforts to reduce industrial overcapacity."

Capitalist overproduction is rife everywhere: too much steel, too much coal, too much cement, too many bricks, and so on. The global market economy is in crisis. Demand is falling everywhere. Cuts and austerity are generalised.

This overproduction is not overproduction in terms of people's needs, but of what can be sold at a profit. People need houses, washing machines, driers, furniture, transport, etc., etc. But factories are shut down and people thrown out of work because the capitalists cannot make sufficient profits. The whole situation is madness; it defies logic.

For a socialist plan

What is needed is a rational plan to use these resources, such as steel, for society's benefit. Why can't we build decent houses, modernise our transport systems, build more schools and hospitals, upgrade our infrastructures, bridges, highways, parks, and public places? All this requires steel, so why shut down steel plants?

All of this requires rational planning. We must plan the economy for the needs of people, not the profits of the billionaires. It is the market economy that has brought us to this ruin. It is time we got rid of it altogether.

We must take the steel industry into public ownership - but we must not stop there. If we are going to plan the economy, we need to take over the banks and financial corporations also. We need to take over the public utilities, gas, electricity, water, telecommunications, etc., and nationalise the land, the building corporations, and construction companies. If we take over the giant corporations which dominate the economy then we can decide our future. Everyone can have a decent job with decent pay. Automation and technology can be introduced to reduce the working week for everyone.

Only in this way can be abolish the anarchy of capitalism, which is responsible for shutting down workplaces and destroying communities. Only then can we plan and live our lives to the full.

As a first step, we must nationalise the steel industry to save the industry and protect jobs. But the Labour leadership under Jeremy Corbyn must commit themselves to go further - to take over the commanding heights of the economy in order to provide jobs and guarantee a future for our communities.