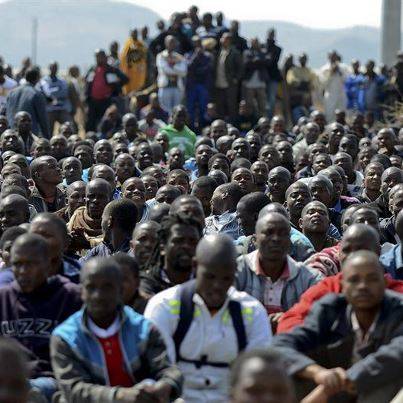 An explosive situation is once again building up in the platinum belt around Rustenburg, as a four month old strike over wages by 70,000 miners has seen the dramatic escalation of tensions in the last few days. Just in the last few hours the state has dispatched the army to assist the already large police contingent in a desperate attempt to break the strike.

This has gone hand-in-hand with a malicious campaign of intimidation by the three largest platinum producers in the world, Impala Platinum, Lonmin PLC, and Anglo American Platinum against the miners. These attempts have in turn sparked mass protests by the mineworkers. The situation is very tense and could lead to a confrontation at some point.

The 16 week-old strike, which is now the longest in South Africa's history, is a continuation of the struggles of the workers which ended in the massacre of 34 mineworkers in Marikana on 16 August 2012 by the police. Members of the Association of Mineworkers and Construction Union (AMCU) downed tools on 23 January, demanding that their basic salary be doubled to R12,500. This is the same demand posed by the workers of the wildcat strike of August 2012. After the massacre in 2012, an unsatisfactory agreement was reached which soon fell apart and which led to the current protected strike which has halted 40 percent of global platinum production.

There have been negotiations to end the strike since January. However, the talks have been conducted in a hostile and arrogant manner by the company bosses. This has led to a hardening of attitudes on the part of the union. In the end the talks deadlocked and then collapsed completely, leaving no end in sight for the strike. The bosses of Impala, Lonmin and Anglo American Platinum have since then used the extended strike and reported financial losses to threaten large-scale restructuring that will lead to thousands of job losses.

In the last few days the companies have sought to undermine AMCU by approaching striking workers directly about their latest pay offer - which has already been rejected by the workers. Lonmin sent out thousands of text messages to the miners and gave the workers until yesterday, 14 May to report to work, threatening them with "restructuring", i.e. with dismissal. Similar moves are planned at the other two companies. The bosses went so far as to start-up the smelters in an attempt to put more pressure on the workers. This coincided with the deployment of the police, allegedly to escort those miners who wanted to return to work to the mines and to prevent violence. On Tuesday police were deployed all over Marikana, but have concentrated their main forces around Lonmin's Marikana mine.

"Anarchy will not be allowed, whether disguised as industrial action or not," warned police minister Nathi Mtethwa on Wednesday. National police commissioner Riah Phiyega said the police would remain in the Marikana area as long as the situation warranted their presence.

These developments have in turn sparked off mass protests by the mineworkers. On Tuesday, the day before the deadline, thousands of miners marched through the informal settlements, blocking the main road which leads to the mine shafts with rocks and burning tyres. The mood of the miners was defiant as one worker explained: "We will go back to [to work] but we need the money first… We don't want to be split into two, that's all."

On Wednesday, Thousands of workers gathered at the Wonderkop stadium near the Lonmin operations and clearly defied the ultimatum of Lonmin to return to work. One worker put it like this: "The only thing we need is R12,500. Accepting the current offer means that we have been on strike for four months only to receive R500. This is not what we strike for. I find it difficult that the employers could not understand our demand, which is clear."

It is clear that the companies are colluding with the state to break the strike by any means necessary. The situation has seriously escalated over the last few days and the situation is now like a pressure cooker - eerily similar to the events of August 2012. Just after the massacre of 2012 NUMSA's central committee issued a statement which correctly stated that the only way forward is the nationalisation of the mines:

"NUMSA is convinced that the only unless the mineral wealth of our country is returned to the people as a whole, mining will continue to be characterised by violence against the working class either, through dangerous working conditions or the from bullets of the police in defence of the profits of the mining bosses. We see no solution to the violence against workers on the mines apart from nationalisation in defence of the lives of all South Africans."

Today, the Food and Allied Workers’ Union (FAWU), which is an ally of the metal workers’ union, denounced the actions of the mine bosses:

However, we must state that the stance of the leadership of COSATU, and especially the National Union of Mine Workers has been deplorable. The NUM has done everything in its power to undermine the leadership of AMCU and has solely focussed on a membership campaign to recruit workers back that it had lost to AMCU after the strikes of 2012.

Solidarity is one of the core principles of trade unionism. The fact that the NUM and the COSATU leadership have not expressed solidarity with the mine workers and their struggles, because they belong to a union that is not affiliated to COSATU, is a disgrace and amounts to despicable strike breaking. Apparently, COSATU’s slogan of an ‘injury to one is an injury to all’ has been forgotten by the leadership. Once more the present COSATU leadership has behaved as a tool of the corrupt right-wing clique around Jacob Zuma.

In a dramatic development, the security forces have confirmed that the army has now been placed on standby at Rustenburg’s public order police base. This is a new development in the situation. The army has not been deployed against street protests for many years and it is a move which is reminiscent of the Apartheid era. However, this is now the second time in five days that the army have been deployed in the townships.

On Friday, two days after the elections, the army was sent into the township of Alexandra after unrest there broke out because of small-scale vote-rigging allegations. Today it is clear that the Alexandra incident was a trial for army intervention in Marikana.

It is now obvious that President Zuma feels emboldened after the re-election of the ANC and is willing to act more decisively in the interest of the bourgeoisie. These 'decisive' actions may include another massacre of the workers. This shows the real nature of the bourgeois state which is essentially armed bodies of men in defence of private property and the rule of capital.

The latest moves clearly show that the Zuma government is mobilising the armed forces in coordination with the mining companies who are demanding the rule of law and order and the end of endless strikes for “insignificant” issues such as wages and working conditions. This intervention, however, is not just intended at breaking the mine workers; it is aimed at breaking the mine workers as a first step towards breaking the back of the South African workers’ movement as a whole. But this is a dangerous game. The mood amongst the workers is moving towards boiling point and the deployment of the army could provoke an unstoppable movement which would sweep the whole government to one side and open up a revolutionary situation in South Africa.

It is the immediate task of NUMSA and other progressive trade unions to prepare for a national general strike if the attacks on the mineworkers go ahead. For more than 150 years these mining companies have looted the country and the working class and organised massacre after massacre. The owners of the companies, which are big international financial companies, do not play any progressive role. They are merely parasites on the back of the South African workers. They have no right to own any of the mines.

The strike cannot go on as it is where miners are going hungry. In order to win the struggle it must be escalated. Action committees must be set up by the workers in every mine to prepare for their occupation with the aim of nationalising them and running them under workers' control and management. The same should be prepared by NUMSA and other unions across the country in all major industries.

These events are taking place only days after the national elections finished. It is clear that South Africa has now entered a new period of turmoil and instability. New shocks and convulsions are on the order of the day. The option before the South African working class is socialism or barbarism. Only by abolishing the capitalist system can the problems of the workers be solved.