Details
In Defence of Marxism
11 August 2006

Britain
Share
Tweet
On Tuesday the eighth of August at a quarter past one, the mortal remains of comrade Ted Grant were cremated in a simple but dignified ceremony at the East Essex crematorium. Almost a hundred of Ted's old comrades and friends gathered to see him off on his last journey.

On Tuesday the eighth of August at a quarter past one, the mortal remains of comrade Ted Grant were cremated in a simple but dignified ceremony at the East Essex crematorium. It was a beautiful summer's day, with a clear blue sky. Almost a hundred of Ted's old comrades and friends gathered to see him off on his last journey.

Many more were unable to attend because they were away on holiday, out of London or unable to get time off work. But many had travelled long distances to be present. There were quite a few from Scotland, as well as comrades from Pakistan, Sri Lanka, Belgium, Denmark, Sweden, Greece, Russia, France and Spain.

Among those present were veteran Trotskyists from the days of the RCP and the WIL, including Arthur and Brian Deane, the last remaining representatives of that remarkable proletarian dynasty, the Deane family from Liverpool, who had been Ted's comrades from the 1940s. Jimmy Deane, unfortunately, died a few years before Ted, who had loyally maintained contact with him right to the end. Also present was veteran former Labour MP Stan Newens.

At the appointed time, we lined up behind the coffin and filed slowly into the room, which turned out to be too small to accommodate such a large number of mourners. Those who could not find a seat stood solemnly on either side of the coffin, upon which a few bunches of red flowers were strewn. Ted left this life as he had lived it, as an austere proletarian revolutionary who had no time for pomp and ceremony.

The proceedings were introduced by comrade Rob Sewell, who had known Ted since he was a schoolboy in Swansea in the 1960s. Rob welcomed the comrades and paid a warm tribute to Ted as an outstanding Marxist and a great man, before introducing the first speaker, comrade Lal Khan, the leader of the Marxist tendency in Pakistan, which has made spectacular progress in recent years, and of which Ted was particularly proud. Lal Khan, who was a close friend of Ted, made a dignified yet emotional speech that produced a deep effect on all present: 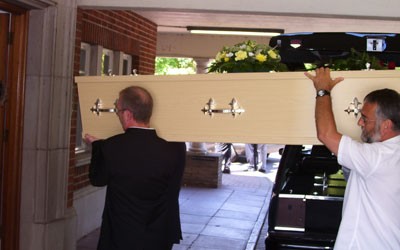 "Ted Grant taught us all how to love life in a different way," he said. "The real meaning of life is to struggle for a better life for all, to fight to change society. Ted always wanted to come to Pakistan, but that was not possible. But though he never set foot in Pakistan, he is widely known, loved and revered there. It is no accident that the country where most obituaries of Ted Grant have appeared in the press is precisely Pakistan. Thanks to the ideas, methods and traditions we have learned from Ted, we have already built the biggest Communist Party in the history of Pakistan. We will honour his memory in the only way he would wish: by building a mass Marxist force capable of carrying out the socialist transformation of society."

Following Lal Khan, comrade Alan Woods addressed the gathering: "It is always sad to say a final farewell to somebody with whom one has worked and fought. Yet in all the forty-six years I knew Ted, I can never remember him being sad or depressed. On the contrary, he was always full of optimism and enthusiasm that was contagious and that he was able to transmit to all those around him. Right to the end he kept his faith - that faith which can move mountains. This was not religious faith. Ted had no time for religion - "spiritual booze" as he called it. No! This was faith in the ideas of Marxism, the theories of scientific socialism that he began to study from the age of 14 when he started to read Capital. It was faith in the ability of the working class to change society, which he had ever since he began his revolutionary career so many years ago, in the dark days in South Africa. He never lost this faith."

Alan went on to pay tribute to Ted as a great communicator: "He had a wonderful ability to explain the most complicated ideas in the simplest language. He was able to talk in exactly the same way to educated Marxists, ordinary workers, Labour Party members, trade unionists and even to bourgeois," he said. "The only person who came close to Ted in this respect was Pat Wall." 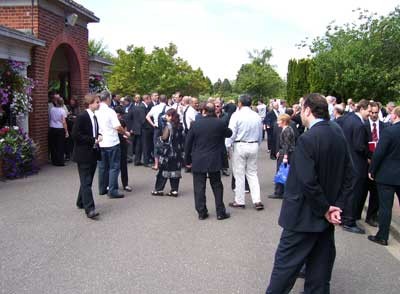 "Death comes to all of us," he continued, "and as materialists we do not believe in a heaven or hell beyond the grave. Yet immortality is possible. We live on in the memory of our friends, comrades and children. Ted had no family but the movement - that was the only family he ever wanted. And we will keep his memory alive by fighting for his ideas and the cause of socialism."

Alan finished his oration by quoting from a Latin poem called Exigi Monumentum ("I have raised a monument"). In this poem the author says he has raised a monument to his loved one, not in stone or in brass, but in the form of a poem that lives forever. "We will build a monument to Ted Grant - not in stone, or brass or ink, but an imperishable monument of proletarian organization that will transform the world."

After this moving tribute to Ted by his lifelong friend and comrade, Rob Sewell announced that a special Ted Grant Memorial Fund would be launched at the September 9th Memorial Meeting, to which everyone was invited. He then read out the words of Trotsky's Testament:


I have no need to refute here once again the stupid and vile slander of Stalin and his agents: there is not a single spot on my revolutionary honour.  I have never entered, either directly or indirectly, into any behind-the-scenes agreements or even negotiations with the enemies of the working class. Thousands of Stalin's opponents have fallen victims of similar false accusations.  The new revolutionary generations will rehabilitate their political honour and deal with the Kremlin executioners according to their deserts. 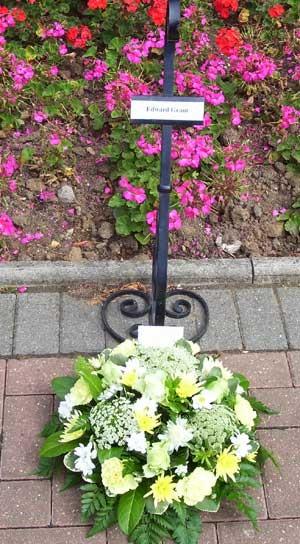 I thank warmly the friends who remained loyal to me through the most difficult hours of my life.  I do not name anyone in particular because I cannot name them all.

For forty-three years of my conscious life I have remained a revolutionist; for forty-two of them I have fought under the banner of Marxism.  If I had to begin all over again I would of course try to avoid this or that mistake, but the main course of my life would remain unchanged.  I shall die a proletarian revolutionist, a Marxist, a dialectical materialist, and, consequently, an irreconcilable atheist.  My faith in the communist future of mankind is not less ardent, indeed it is firmer today, than it was in the days of my youth.

Natasha has just come up to the window from the courtyard and opened it wider so that the air may enter more freely into my room.  I can see the bright green strip of grass beneath the wall, and the clear blue sky above the wall, and sunlight everywhere.  Life is beautiful.  Let the future generations cleanse it of all evil, oppression and violence, and enjoy it to the full.

Then comrades stood as the curtains were closed and the coffin disappeared from our view. Somebody called out: "Goodbye Ted!" We sang The Red Flag and The Internationale and it was all over. We all felt that a whole era had ended at that moment. But life springs eternal, and the struggle continues. Ted would not want us to see it in any other way.