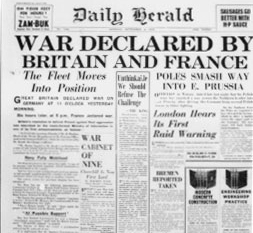 As part of a general attempt to slander revolutionary ideas as pro-Nazi, the Labour Party's newspaper, Daily Herald, ‘accidentally' included the report on the trial of the Minneapolis General Drivers' Union, also leaders of the Socialist Workers' Party (Fourth International), into a report of the trial of 33 German spies. Here is the vibrant protest of the Workers' International League, by Ted Grant.