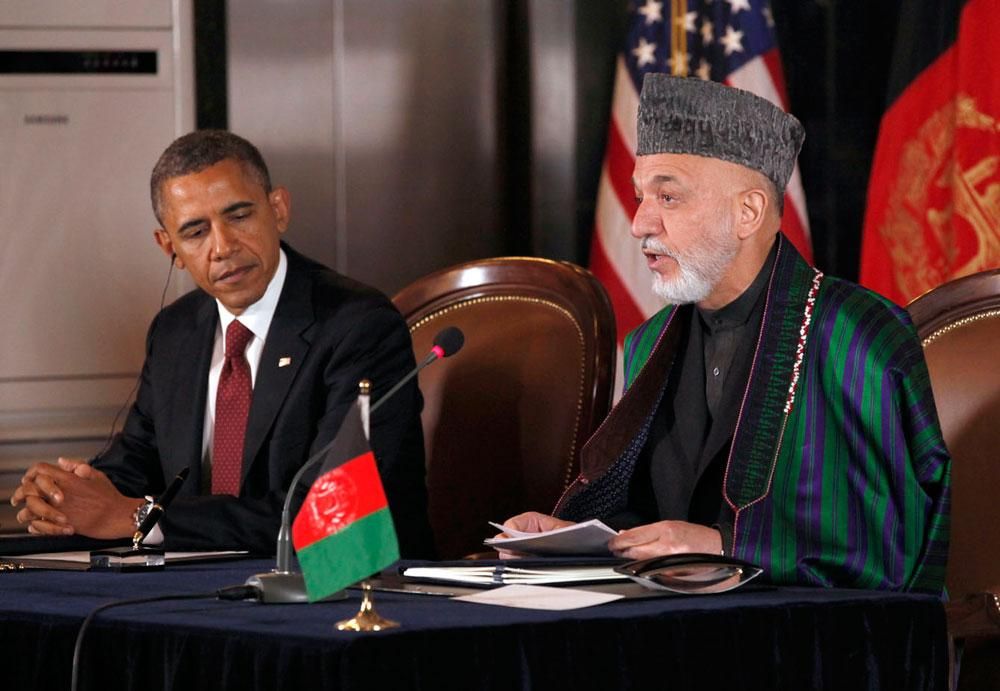 Just hours before the beginning of the peace talks between the Taliban and the US delegation in Qatar the mercurial Afghan President Karzai suspended talks on a long-term security deal to keep US troops in Afghanistan after NATO leaves in 2014.

Irritated by a press conference in Qatar at which the Taliban effectively portrayed themselves as a government in exile, Karzai is reported to have said, “As long as the peace process is not Afghan led, the High Peace council will not participate in the talks in Qatar.” His office later added in a statement, “The Taliban’s flag and the banner of the Islamic Emirate was something we did not expect… In view of the contradiction between acts and the statements made by the United States of America in regard to the peace process… the suspension of the talks will continue until there is clarity from the United States.”

These are daring words from a man who was installed with his puppet regime by the western imperialists after the occupation of Afghanistan by the US forces in 2001. This is a clear display of weakness by US imperialism brought to the fore by the economic collapse and the military defeats in Iraq and Afghanistan. However, repeated phone calls by John Kerry, the US Secretary of State, appeared to have mollified Karzai, and according to BBC News, he now wants to “keep wheels moving again” and that he may be willing to continue with security handover talks at least

The Karzai-Obama declaration in January, the Cameron-Karzai-Zardari Chequers summit in February and the Kerry-Karzai-Kayani meeting in Brussels in April have all been desperately trying to get the Taliban back to the negotiating table. President Obama said after the G8 summit in Enniskillen in Northern Ireland that, “This is an important first step towards reconciliation; although it’s a very early step… we anticipate there will be a lot of bumps in the road.”

These reactionary despotic monarchies at the behest of US imperialism are fully behind these Islamic fundamentalists not only in Afghanistan but also in Egypt, Palestine, Syria and other countries in the region. These regimes impose an iron grip and a ferocious repression in their own kingdoms. The Economist wrote in its issue of 8th June, “In an Emirate presenting itself as the face and the financier of regional reform, Qataris could be forgiven for asking when they may taste at home what their leaders preach abroad. Political parties are banned in Qatar. So are demonstrations, trade unions and associations…” Death sentences are meted out to people even for writing poetry that smells of resistance against the tyrannies of the regime. Mohammad al Ajami a poet was sentenced in 2011 to life imprisonment.

It is a myth that the Taliban are a homogeneous and centrally organised body. There are numerous groups led by different warlords representing capital from poppy growers and drugs to those involved in kidnappings, ransom and other crimes and they have been tearing each other apart for control of this ill-gotten booty. They all represent black reaction and are aligned to the regional and international imperialist powers that are involved in this new great game to exploit and control minerals resources, gas pipelines, road, rail, sea and naval strategic networks.

The Chinese, the Indians, the Russians, the Iranians, the Saudis and of course the Pakistani state and secret agencies have stakes in this conflict. The US, Britain and French states have their share of the fundamentalists protégé outfits. It is a mystery which group or coalition of groups there is to negotiate with in Qatar and who is their sponsor. Secondly, the prospect of a negotiated settlement and peace through these talks is, to say the least, an absurdity.

US commander in Afghanistan, General Joseph Dunford, has already admitted he is sceptical about whether it is possible to broker a peace deal with the Haqqanis, the most feared of the insurgent factions. According to an AFP report of 19th June, “A divided insurgency is likely to complicate peace talks. There are many other fundamentalist outfits that will try to sabotage these talks. Even those represented in Qatar will face splits and disintegrations of their groups with the hardliners breaking away in fear of losing the assets and the money they had accumulated in this reactionary war. The Taliban delegation in Qatar has till now refused to accept the preconditions set by the US negotiators which include breaking ties with Al Qaeda, recognising the regime in Kabul and many others. Then it is the question of the regime in Kabul and the Northern Alliance that is bitterly opposed to any direct negotiations with the Taliban.

The Taliban captured Kabul in September 1996 with the support of the ISI [Pakistan’s secret services] and Benazir’s government in Pakistan. The financial support from the US, particularly by Robert Oakley former US assistant Secretary of State and advisor to the American oil giant UNOCAL at the time, has been well documented in several works on Afghanistan. US imperialism balked at the Taliban only after their government under Mullah Omar double-crossed UNOCAL. Apart from sending a delegation to its head office in Texas, the Taliban sent another delegation at the same time to Buenos Aires to the headquarters of BRIDAS an Argentinean oil conglomerate to negotiate an even more lucrative deal of laying a pipeline from Central Asia through Afghanistan. The rest, as they say, is history.

The mineral wealth and strategic importance of Afghanistan have become a curse for its inhabitants. The only good memories are of the reforms introduced by the PDPA government Led by Noor Mohammad Tarakai after the Saur (or spring) revolution of April 1978. In the period of 18 months before the Russian invasion of 29th December 1979 radical reforms were carried out to alleviate the oppressed masses. The imperialist intervention actually started then when the fundamentalists were recruited and the dollar jihad was set in motion by the CIA to counter the revolution through the vicious Zia dictatorship in Pakistan and the Saudi intelligence agencies. The CIA recruited Osama bin Laden in 1978 to lead the Jihad. The Americans want a face saving exit. The precondition of disassociation from Al-Qaeda is now a US negotiating aim. "We don't expect that they would decry Al-Qaeda and denounce terrorism immediately off the top – this is the end goal," said Jennifer Psaki for the United States Department of State on Wednesday.

These negotiations can neither bring peace nor can they provide the imperialists an alibi. US imperialism is a diminishing economic and military power. It cannot offer the Taliban peace any more than it could secure it for the current regime of President Hamid Karzai. The Taliban could not win this war nor could they be crushed by the imperialist armies. With the withdrawal of large portion of Americans the violence would not really diminish but the so-called anti-imperialist stance of the fundamentalists would be fractured. Even if a face saving deal is sealed, it will not protect Afghanistan from more bloodshed, if the history of past agreements offers any lessons. Let us not forget a Saudi-brokered effort which ended when a prince brought commanders to Mecca to swear they would respect a pact, but their troops started shelling each other again before the men had left the holy city.

The imperialists and the Taliban are both based on finance capital; hence they are two sides of the same coin. The menace of fundamentalism can only be defeated and smashed when its base, finance capital is destroyed. This system has to be overthrown. It is the task of the youth and the toilers of Afghanistan to rid the country of terrorism, obscurantism, and imperial domination.

Shallow gestures about democracy and human rights under the crushing domination of capital will not end the extreme poverty. Misery, alienation and deprivation that stalk Afghanistan can only be removed through a socialist revolution.

The Durand Line imposed by the British imperialists in 1893 is an artificial divide of a people who have the same language and culture. Hence the events in Afghanistan will reverberate and have an impact in Pakistan, especially among its Pushtoon population. There cannot be two separate revolutions. The 1978 revolution, in spite of its weaknesses and blatant mistakes of its leaders, at least overthrew capitalism and landlordism. If it could happen then, now such a revolution with its leadership learning from the past mistakes, expropriating the foreign and domestic capital and based on Marxist internationalism, could transform this tragic land into a beacon of hope for the oppressed masses of South Asia, the Middle East and far beyond.