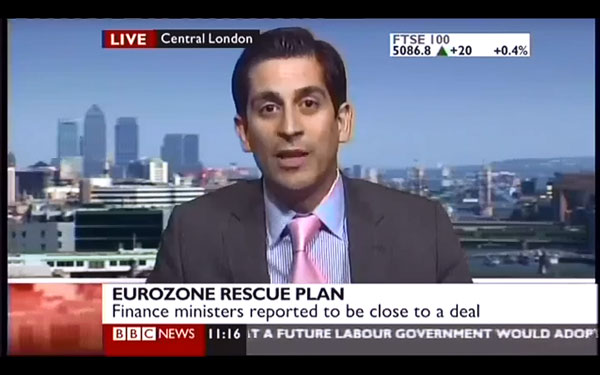 In an interview which shocked the BBC News presenter, “independent trader” Alessio Rastani gave a very frank appraisal of his perspectives for the world economy. "This economic crisis is like a cancer, if you just wait and wait hoping it is going to go away, just like a cancer it is going to grow and it will be too late,” he said, adding that governments would not be able to fix the economy.

“This is not a time right now for wishful thinking that governments are going to sort things out,” he told the BCC News on Monday, September 26. He added that another world recession had already started and warned that within 12 months, “the savings of millions of people are going to vanish”.

Alessio Rastani was dismissive of the much talked about Eurozone rescue plan which is being worked out by European governments. “This particular rescue plan, it doesn’t matter how much money they want to put in, is not going to work. This problem cannot be solved. I am fairly confident that the euro is going to crash and is going to fall very hard. The markets are ruled by fear right now.”

What seems to have drawn most attention to this particular interview though was the callousness and candour with which Rastani spoke. When asked about what should governments do to solve the current crisis he basically said that he didn’t care. “I'm a trader,” he said, “we don't really care whether they're going to fix the economy, our job is to make money from it.”

We should thank Rastani for being so brutally frank. Yesterday, the ILO released a report which put the number of jobs lost in the G20 countries since 2008 at 20 million, and it warned that if the economy did not grow substantially in the next year, another 20 million jobs would be lost by the end of 2012. But capitalists do not care about the future of millions of people who are losing their jobs, are having their homes repossessed, are seeing their pensions cut, etc. In fact, in the case of financial speculators, like Rastani, they see that as an opportunity to make money. Marx described it as “the purest and most colossal form of gambling and swindling”.

Rastani goes as far as to say: “personally, I've been dreaming of this moment for three years. I go to bed every night and I dream of another recession.”

The other assertion by Rastani which commentators have found scandalous is when he said that “governments don't rule the world, Goldman Sachs rules the world”. He is right, of course. On the one hand, finance capital is not concerned with moral or national considerations and will move around the globe seeking the highest return in the shortest space of time. This is the nature of the capitalist system. On the other hand, of course, governments are not the expression of the will of the people, but, in the words of Marx and Engels, are “but a committee for managing the common affairs of the whole bourgeoisie.” The pretence of bourgeois “democracy” is fully exposed in times like this, of a deep economic crisis, when governments, of whatever political persuasion, are all left with no other alternative than to implement policies that will make workers pay for the crisis of capitalism.

The BBC News presenter was left with her mouth open. In fact, because of the callous and frank way in which Rastani expressed himself, there has been a lot of speculation about whether he was not a hoax. What he said might be shocking for ordinary working people, but Robert Peston, the BBC Business Editor, admitted that what Rastani said is “what traders say privately to me”.

Marxists will not be surprised by Rastani’s assertions. The important point is that the mood of doom and pessimism which has been permeating bourgeois commentators in the last few weeks is also having a profound impact on the consciousness of millions of ordinary working people. They are starting to realise that the capitalist system is in crisis and that this crisis is not going to go away any time soon. They are starting to realise how capitalism really works (or rather, how it doesn’t work). This is a system in which a handful of unelected bankers, capitalists, speculators and thieves are the ones taking decisions affecting the livelihoods and jobs of hundreds of millions, who are left having no say in the matter.

This is only the beginning. It is the task of Marxists to provide a clear analysis of the reasons for the crisis of capitalism and above all to offer an alternative: the struggle for a socialist society.