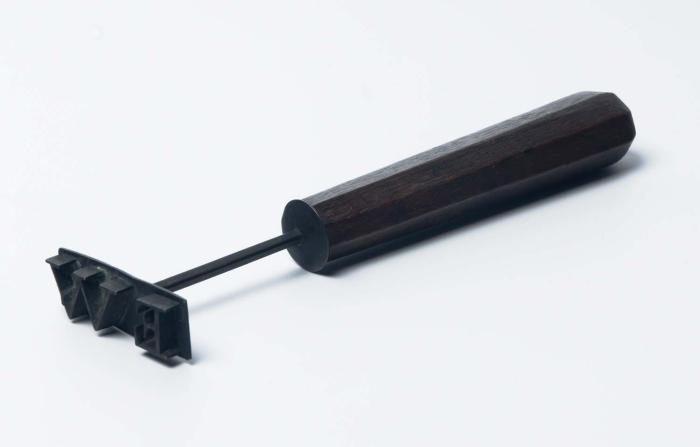 The South American country Suriname held parliamentary elections last Wednesday. The Mega Combination, a coalition led by Desi Bouterse’s National Democratic Party, won the elections because of mass support amongst the poor and the youth of Suriname. What’s the history of Suriname and why did the party of the former military leader win the elections?

Suriname is a small country in the north of South America, which only has about 500,000 residents. Since the 17th century it was a Dutch colony, where slaves were imported from West Africa to work on the plantations. After abolition of the slave trade in the 19th century, to replace the African slaves, contract labourers were imported from British India, China and the Dutch Indies. Some groups of slaves escaped and formed tribes in the jungle, the so-called Maroons, settling next to the native americans who lived there. This way Suriname became one of the ethnic most diverse countries in the world. In 1975 it was granted independence by the Dutch government. But independence did not make the conditions of the poor Suriname people much better. As much as one third of the population emigrated to the Netherlands in the aftermath of independence, to live in poor neighbourhoods in Amsterdam and The Hague.

The indigenous bourgeoisie of Suriname did not develop the country, but instead plundered it, together with foreign capital. Corruption was and remains very high. Because of the impasse, a group of officers in the army, led by Desi Bouterse, staged a coup in 1980. The corrupt and reactionary government of Arron was overthrown. Many workers and peasants supported the coup, because they hoped the new regime would improve the living conditions of the Suriname people. 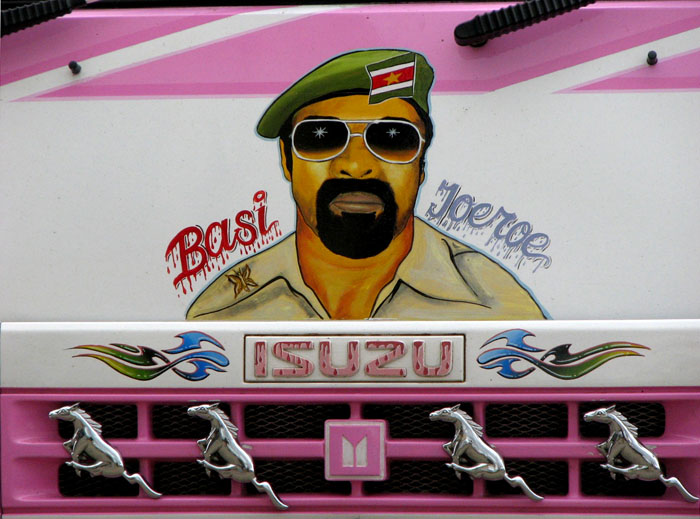 Bouterse painted on a bus in Suriname. Photo by nicholaslaughlin. The new regime led by Bouterse reflected the crisis in Surinamese society. In the army there were also conflicts that reflected the class struggle. The military regime proclaimed a “Socialist Republic”, and some officers wanted to go in the direction of nationalising the means of production and making alliances with Cuba, Nicaragua and Grenada to counteract imperialist pressure. This phenomenon was not limited to Suriname. Ted Grant explained how in the Colonial Revolution, when capitalism faces a blind alley and society enters in crisis, because of the weakness and subordination to imperialism of the indigenous bourgeoisie and in the absence of a lead from the working class, sections of the army could raise themselves above society and establish a Bonapartist regime to pursue independence from imperialist domination. In a number of cases such regimes went as far as to abolish capitalism, nationalise the means of production and introduce a planned economy on the model of the USSR, thus becoming proletarian Bonapartist.

This did not happen in Suriname; capitalism was not abolished. However, the oil production was nationalised, and this became a source of development for the country. The regime of Bouterse for example made some improvements in the country’s infrastructure. Bouterse did enter into talks with Cuba, Nicaragua and Grenada because of the conflict with Dutch and American imperialism. These countries advised the army to give power back to some weak parliament. When they saw that it would not happen, they chose to break off relations partially after the infamous December Murders, when 15 opponents of the military regime were executed.

While the military regime partially improved the conditions of the Suriname masses, the regime became increasingly repressive. In 1986 there was a factional fight in the army between Bouterse and Brunswijk’s Jungle Commando in the east, the so-called Binnenlandse Oorlog. Brunswijk had support in the east of the country, especially amongst the Maroons. While Brunswijk officially struggled for the Maroon minority, this guerilla war in fact was mainly about who controlled the cocaine trade. The Surinamese army and the Jungle Commando fought a dirty war mainly at the expenses of the Maroon population who suffered mostly from the army repression. Maroon villages were burnt down in retaliation. It became clear that the military regime could not last forever.

Under pressure from the Netherlands and the USA, in 1991 Bouterse gave power back to a weak parliament. However, the return to a bourgeois democracy did not solve the problems of the masses. All kinds of pro-capitalist policies were introduced. While foreign capital made a lot of profits, the conditions of the poor Suriname people did not improve, quite the contrary. The national bourgeoisie has done nothing to eradicate poverty since the independence in 1975. Capital from the Netherlands, the USA, China and Brazil makes good profits, while the corrupt ‘democratic’ parties do everything to assist them instead of the people. Since the return to ‘democracy’, tensions between different ethnicities have grown. The subsidies for basic products were scrapped, making the costs of living a lot higher. 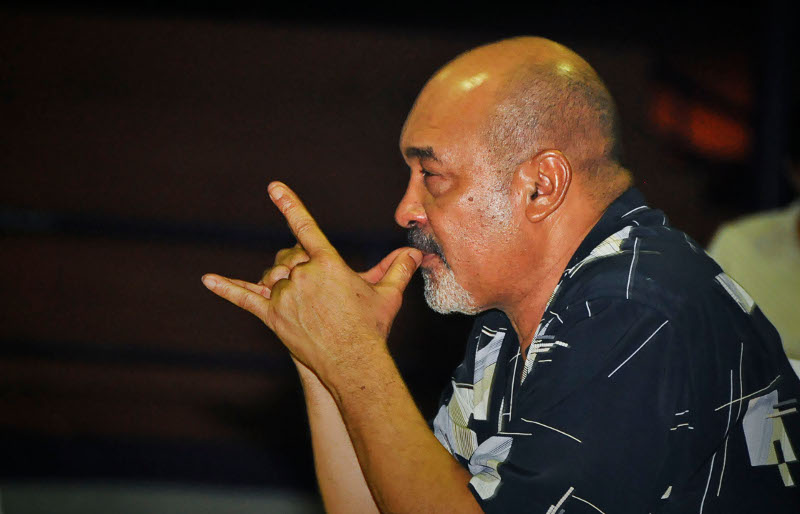 Desi Bouterse. Photo by Anis. On May 25, the Mega Combination, led by Desi Bouterse’s National Democratic Party, won the elections in Suriname. The ruling New Front, led by president Venetiaan, was punished for years of pro-capitalist policies, in which the situation of the masses did not improve. Since the crisis, the price of bauxite has gone down, but the price of gold has risen. Potentially there is enough wealth to develop the country.

Some people cannot understand the reason for the victory of Bouterse. Why did the Surinamese people vote for someone who was responsible for the December Murders? Why did they vote for someone who was found corrupt and was charged for drug smuggling and condemned by a court in the Netherlands? The fact is that the leaders of all political parties have corruption charges in Suriname. What makes the difference for the people there is the content.

The Mega Combination has gained a big popularity amongst the Surinamese youth. About 40% of the Surinamese people were born after 1982, so to them arguments about the December murderers are not really decisive. The youth wants to see change, and has had enough of the New Front.

The Combination has a national democratic programme which emphasizes the unity of the Surinamese people, and wants to eradicate poverty. Bouterse said the Surinamese government should nationalise the profitable resources of the country, like the gold and bauxite industries.

At the same time, he emphasized that he wanted to make deals with foreign investors. The problem is that imperialism and foreign investors do not trust Bouterse. They will put pressure on the new government to keep it with a few small reforms, while the Surinamese workers and youth want real change.

The new government should put its programme rapidly into practice, starting with nationalising the mining industry, putting it under democratic workers’ control and use the resources to finance the necessary social programs. Undoubtedly the government will be subject to enormous pressure from the multinationals, imperialism and their local cronies to water down or even to abandon its promises. This will be used as an excuse by the wavering elements in the new government to postpone the implementation of the nationalisation programme. The question of whether a decisive change will be on the agenda rests on the ability of the masses to organise independently and demand that the government put election promises into practice.

Surinamese Marxists should support progressive measures by the Mega Combination, while at the same time they should point at the limitations of a national democratic programme in a semi-colonial country. The national bourgeoisie is not capable to develop the country, and progressive measures by the Mega Combination will put the country into conflict with imperialism. Especially the Netherlands and the USA are countries that for historical reasons and economic ties will play a direct role in preventing any development which goes against their interests.

The American company Alcoa has the main share in the Surinamese bauxite mining sector. The bauxite mining is the most important source of Suriname’s wealth. Nationalisation will mean a big conflict with American imperialism.

The Dutch labour movement, the unions and the left parties, PVDA, SP and Groen Links should give active support to nationalisations and any progressive measure taken by the new governments in Suriname. In case of direct or indirect Dutch imperialist intervention, the labour movement should do everything in its power to stop it. The same needs to be done by the unions in the US. The claim that a Surinamese government with Bouterse in it needs to be boycotted, because he smuggled drugs to the Netherlands, is wrong from start to finish and will provide the imperialist powers with a comfortable democratic cover for their intervention.

A socialist programme is necessary to solve the problems of the Surinamese workers, peasants, urban poor, the Maroons and the Indians. A break with capitalism is necessary to get real national independence.

The key sectors of the industry should be nationalised under democratic worker’s control.

However, it’s impossible to build socialism only in Suriname. Socialism can only be build internationally, and a revolutionary wave is sweeping through Latin America. The fate of socialism in Suriname in the first place depends on the completion of the revolution in Venezuela. The building of a Socialist Federation of Latin America will mean real independence and progress for all the peoples of Latin America.