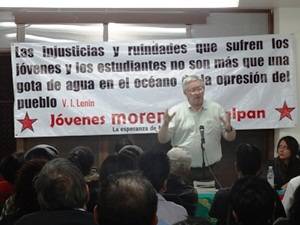 The British Marxist Alan Woods had been invited by the youth organisation of Morena in Naucalpan, Mexico State, jointly with La Izquierda Socialista (Mexican section of the IMT) and the Centro de Estudios Socialistas Carlos Marx, to speak at a meeting on the crisis of capitalism on November  5th

The meeting generated a lot of interest and an hour before the scheduled start there were already people in the meeting hall waiting. Several times the organisers had to get more chairs into the hall as there weren’t enough for the numbers arriving. Finally, the attendance was over 120 people in the meeting which took place in Bosques de Echegaray. There were comrades present from Naucalpan, as well as several other municipalities in Mexico State, and also comrades who had travelled from other states in the country, including comrades from Hidalgo and Quintana Roo, who came specifically to attend the meeting. There were students from the three main universities UNAM, UAM and IPN, members and local leaders of Morena (Movement for National Regeneration) and we were also pleased to have Esteban Volkov, Trotsky’s grandson, in attendance. 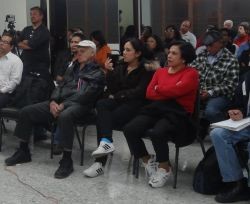 On the left with the white hat: Esteban VolkovOpening up the meeting was Claudia Jay, Youth Secretary of Morena Naucalpan, who stressed the need to understand how the system works in order to fight it. The Political Education Secretary, Antonio Tovar, underlined the same point, explaining that the class struggle is still alive.

Alan Woods spoke for about an hour explaining the depth of the current crisis of capitalism, the role of credit and the record level of indebtedness, and how banking debt had been transferred into the public finances so that in the end working class families are being made to pay for the crisis.

One of the issues Alan Woods dealt with was the scourge of unemployment, which now affects over 300 million people around the world, equal to the population of the United States. This is an enormous waste of the energy and brain power of millions of people who could be occupied producing things which are needed, but are condemned to forced idleness by the crisis of the system.

The human mind is conservative, he explained, but that can change overnight once the situation becomes unbearable. Poverty in itself does not lead to revolution, but it reaches a point at which the situation changes and people take to the streets to struggle. Alan mentioned a few examples, like the movement in Turkey, the marvellous movement of the Greek workers and youth in the last few years and also the unprecedented mobilisation of 17 million people in Egypt which led to the downfall of Morsi. It is true, he added, that none of these struggles has solved any of the fundamental contradictions, as they lacked a revolutionary Marxist leadership.

After he had spoken there was a long list of comrades who asked questions and made contributions on a wide range of subjects. One comrade asked about the situation in the United States, while another asked about the impact of the crisis of capitalism on the destruction of the planet. There were also questions about the role of the service sector in modern capitalism, new technologies, the need for a Communist Party and its relationship with class consciousness, whether a revolution was being prepared in Mexico, etc.

The long list of speakers reflected the eagerness of the audience to learn and also the fact that Alan Woods had explained the basic ideas of Marxism in a plain and understandable language, a far cry from the deliberately obscure way in which many academics speak.

Regarding the United States, Alan gave the example of the movement of the Wisconsin public sector workers and their struggle to defend trade union rights, in which even the police joined in wearing T Shirts saying “Cops with Labor”. He also mentioned the excellent slogan raised by the Occupy movement: “We are the 99%”.

In defining the working class Alan said it comprises all those who do not own the means of production and have to sell their labour power for a wage. It is true that new technologies modify and change the working class, but that does not detract from its importance and the key role it plays in society.

What we are facing now is not a system which can grant some concessions or reforms, but on the contrary, everywhere, the conquests of the past are being taken away. Capitalists are stealing from the people, in the case of Mexico for instance with the privatisation of oil. What is needed is a profound change, putting an end to capitalism, nationalising and planning the economy under workers’ control.

There was a genuine debate about the crisis of the system and the need for socialism, the relevance of the ideas of Marxism, the inheritance of the Mexican revolution and the need for world revolution. It showed the enormous interest for these subjects amongst the advanced layers of workers and youth in Mexico.

Alan finished by reminding the audience of the great revolutionary traditions of the Mexican people. We could have a paradise on earth, he said, the only obstacle is the capitalist system and the capitalist class ruling it which has created hell on earth. He made an appeal to all those present to struggle against capitalism and for international socialism. 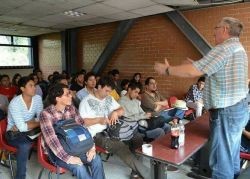 The day before, on November 4, Alan Woods had addressed a meeting of about 50 student activists and leaders from the UNAM and IPN universities organised by the CLEP – CEDEP. Alan stressed the need for students to struggle side by side with the working class. A very interesting discussion followed about the recent #YoSoy132 movement of the Mexican youth, the importance of Marxist theory. Alan Woods closed the meeting by pointing out that this was not a mere academic debate: “I am not an intellectual, but a revolutionary, and I appeal to you to join the International Marxist Tendency” he said.