Details
Communist Tendency of SYRIZA
02 May 2013 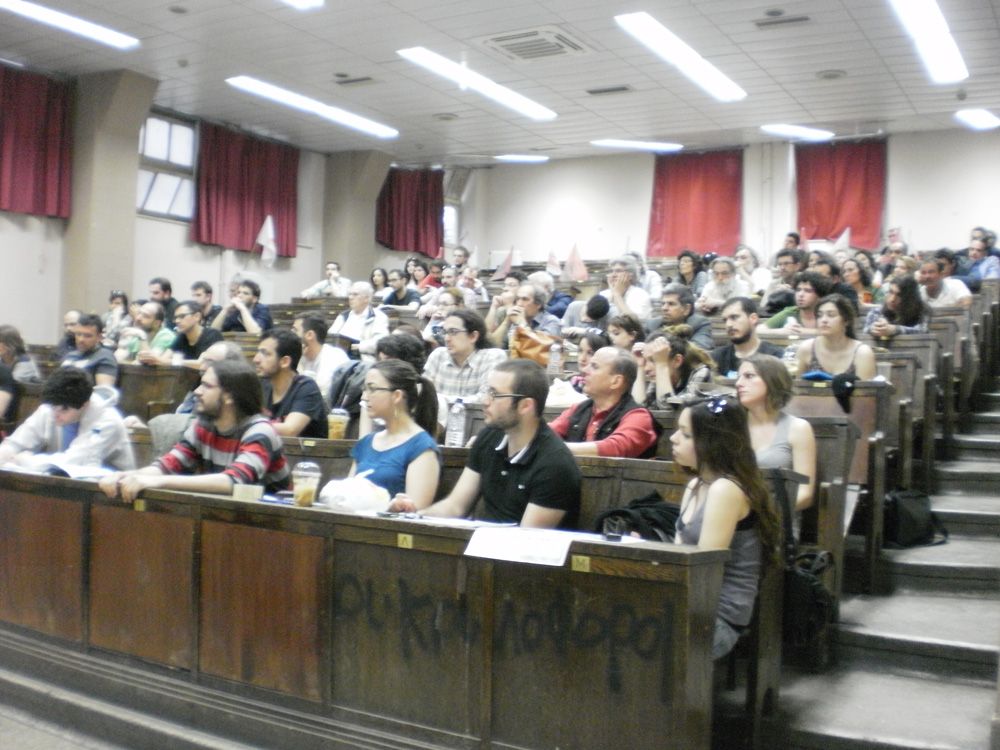 More than 100 people attended the launch of the Communist Tendency of Syriza. Among those present were cadres of SYRIZA and the SYRIZA youth, trade unionists and veterans of the Greek workers’ movement.

On Friday, 26 April, at 7pm in the Athens Faculty of Economics (ASOEE) the inaugural public meeting of the Communist Tendency of SYRIZA was held, with an attendance of over 100 people. Among those present were cadres of SYRIZA and the SYRIZA youth, trade unionists and veterans of the Greek workers’ movement.

The high attendance was particularly satisfactory because there had been a serious problem with the initial meeting room (Law School). Just one day before the university authorities announced the closure of the Law School as a result of violent riots by the anarchists. The comrades had to find another room at the very last minute and to inform all the people who had been invited of the change.

Undoubtedly without this complication, there would have been even more present. But in any case, the large auditorium was filled by militants of SYRIZA and the SYRIZA Youth, all of whom were full of enthusiasm and a desire to ensure a systematic and truly revolutionary and socialist orientation for the Party, starting with the conference in July. 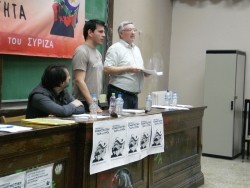 Alan Woods speakingThe keynote speaker was the Marxist writer and leading representative of the International Marxist Tendency (IMT) Alan Woods, who had a major impact on the political thinking of Hugo Chavez, and who is very popular in Venezuela.

Before Comrade Woods’ speech, the event was opened with a speech by the editor of the newspaper "Revolution" and the magazine "Marxist Voice", Stamatis Karagiannopoulos. He analysed the fundamental reasons for the founding of the Communist Tendency. He outlined the revolutionary character of the period and the political tasks facing SYRIZA. Immediately after, he explained the basic programmatic positions that the Tendency will submit to the Party Congress in July.

Then Alan Woods gave a speech (See video to the right) on the perspectives for the European revolution that thrilled the audience. Speaking clearly and simply, he provided a comprehensive overview of the international situation from the perspective of a Marxist analysis. Alan analysed the recent events in Cyprus. He warned against distorting the processes by seeing them through national lenses and pointed out that the Cyprus crisis held important lessons for Greece and SYRIZA.

He said: “I was last here twelve years ago. But the country I have come back to is a different country, and the people are different people. In the past, if I had talked of socialist revolution, most people would have thought me a bit crazy. But now, if I were to speak to any worker in Athens, to any taxi driver or small shopkeeper, they would say: ‘What we need is a revolution!’ And he justified this assertion by quoting a recent opinion poll that stated that 63 percent of Greeks wanted “a fundamental change in society”, while another 23 percent wanted a revolution. “That means that 86 percent of the people want to put an end to the present system. That is a revolutionary situation!”

Comrade Woods pointed out that the crisis of capitalism was affecting not only Europe but the entire world, including the USA: “If everybody was not talking about the crisis of the Euro, they would be talking about the crisis of the USA,” he said, adding that the total debt of the USA was $17 trillion – more than 100 percent of its GDP. He also explained that the crisis was neither a crisis of credit nor of liquidity. In the USA the big monopolies are sitting on almost $2 trillion, which they are not investing in production, and in the EU the figure is around one trillion. “They do not invest, not because they lack capital but because there are no markets,” he stressed.

He talked about Venezuela, the role of Chavez and explained concretely how SYRIZA could pave the way for a radical overthrow of the Memoranda and capitalism. Referring to the perspectives for Europe, he argued in favour of the slogan of the Socialist United States of Europe. Pointing to the impasse of modern reformism, he stressed the need for a return to the original ideas of communism.

After his speech there followed a lively discussion rich in reflections and opinions, in which the participants in the event were allowed to express their views freely, and Alan Woods answered the questions. Some old Stalinists, supporters of the Lafazanis Tendency, argued that the solution to Greece’s problems was to leave the Euro and return to the Drachma.

These arguments were ironical, since the Greek Communist Party (KKE) at its recent congress in April finally rejected the old Stalinist line of the two-stages and dropped the word “patriotic” from its programme. Comrade Woods explained that the fundamental cause of the crisis was not the Euro but the capitalist system. “The two fundamental barriers that stand in the way of human progress are private property of the means of production and that antiquated fossil the nation state,” he argued.

Woods warned the advocates of a return to the Drachma that their prayers might be realised in the end, if, as was possible, Greece were ejected from the Eurozone. He predicted that the Drachma would immediately “sink like a stone”:

“Since everybody knows that the only reason for a return to the Drachma is to devalue the currency, nobody will want to hold Drachmas. And since Greece has to import oil and many other things, a collapse of the drachma would mean massive inflation, or even hyperinflation, as in Germany after 1923. There would be a frightful economic slump, even deeper than now,” he warned. “There is no future for Greece on a capitalist basis, either inside or outside the Eurozone,” he said.

Alan also explained that remaining in the Eurozone was no solution. That would only signify a continuation of the present policies of cuts and austerity for the next ten or twenty years. This was a finished recipe for an explosion of the class struggle that would put revolution on the order of the day.

He said: “If I were in Tsipras’ place, and SYRIZA won the election, I would immediately go on television and say to the Greek people: You have elected me to represent your interests, and I intend to do just that. We renounce the criminal Memorandum. We will not pay a single Euro to the thieves! We will immediately cancel all the cuts, privatizations, sackings and other counter-reforms that have been inflicted on the Greek people by the Troika.

“In order to take control of our own economy, we will expropriate the land, banks and big companies without any compensation. We will introduce a plan of production that will mobilize the unemployed to build houses, schools and hospitals that the people need. We will introduce a state monopoly of foreign trade and prohibit the export of capital from Greece. After all, that is what they have just done in Cyprus!

“That will naturally mean that they will expel Greece from the Eurozone and the EU. They will attempt to strangle the Greek economy. It will mean hardship in the beginning. But the Greek people are already suffering terrible hardship to pay the bills of the bankers and capitalists. They would be prepared to make even greater sacrifices in order to defend their own interests.

“People all over Europe are sceptical about all politicians, parties and governments. If SYRIZA showed it really meant what it said and was prepared to take drastic measures to defend the people, the masses would react with enthusiasm. In fact, if such a programme were announced, they would be dancing in the streets! In order to fight against the Europe of the bankers and capitalists, it will be necessary to make a revolutionary appeal to the workers of Europe to follow this example.

“A socialist Greece would not be isolated. The workers of Spain, Italy and Portugal would immediately respond, and would soon be followed by the workers of Ireland, France, Britain – yes, and Germany also. The impact would be even greater than that of the Russian Revolution of 1917. The basis would be made for the overthrow of capitalism and the establishment of the Socialist United States of Europe.”

This speech was met with an enthusiastic response. The mood of the meeting was very high, which was reflected by the fact that the event continued until 10.30 pm, having kept going for almost four hours. This was the best possible start to the Communist Tendency of SYRIZA!