The Capitalist crisis has plunged the state of California into its worst budget crisis in history. Billions of dollars have been already slashed from the budget and billions more will be cut this year in order to“fix” the shortfall of $20.7 billion. Unable to find any other solution on the basis of Capitalism, workers and students will bear the brunt of these cuts. The students have already fought back on several occasions with strikes and occupations.

The Capitalist crisis has plunged the state of California into its worst budget crisis in history. Billions of dollars have been already slashed from the budget and billions more will be cut this year in order to“fix” the shortfall of $20.7 billion. Unable to find any other solution on the basis of Capitalism, workers and students will bear the brunt of these cuts.

California has the highest economic output of any other state; it alone accounts for more than 13% of the total GDP of the US, and saw tremendous economic growth in the years before the crisis. However, this increase in wealth only benefited a minority. According to the California Franchise Tax Board, from 2001 to 2007, corporate net income skyrocketed by 578.1%. From 1995 to 2006, the income of households in the top 1% increased by 108.7%, while the income of the bottom 60% grew only by 9.6%. And when inflation is taken into account, their income actually fell by 17.1%. And these were the good years! With the recession the situation has certainly gotten worse.

With the economic crisis already taking its toll on hundreds of thousands of jobs in the state, working class and poor Californians were hit even harder when the “bi-partisan” state legislature approved steep cuts to essential services such as Disability and Social Security Insurance payments, unemployment insurance, Children’s Services, Medi-Cal, Caltrans, Calworks, etc. To add insult to injury, thousands of workers where given pink slips, furloughed, or forced to take cuts in pay and work hours. Education suffered severe cuts, even though the buildings in some schools are literally falling apart.

Education is in dire straits. According to the California Department of Finance, K-12 school district education cuts in the last two fiscal years will amount to more than $9 billion. Cuts in the State Universities and University of California will amount to nearly $2.0 billion, and cuts to the community college system will be at $702 million. The tally of all of the cuts to education statewide will be an incredible $16 billion. These cuts have meant layoffs, overcrowding, furloughs, etc., This is on top ofthe already declining quality and infrastructure of the California education system that has been going on for years.

The educational crisis is being felt everywhere, the lack of resources is having a profound impact on education, as high school student Lane Erickson, quoted in LA Youth magazine, stated, “My school doesn’t have the money to let teachers make enough copies to give one handout to each student. One class set of each handout is all it can afford ... We’re being forced to spend time copying down questions, rather than thinking about and writing down answers.” 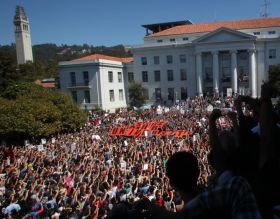 On September 24th, the first day of classes at the University of California, the “University of California Walkout” took place on many campuses around the state. Beginning with a petition, it called on faculty, students and workers to walkout to protest the cuts at the UCs, the proposed 32% fee increase, and in solidarity with striking workers. There were sizable demonstrations on many campuses, with solidarity actions taking place at other universities, but the highlight of this campaign was a 5,000 person-strong demonstration that took place at UC Berkeley. Perhaps an even more important development is the general assembly that took place after the demonstration, which called for a statewide conference on October 24th to organize the defense of public education. These are the kinds of structures and actions needed to build a mass and democratic student movement that can end the cuts and improve education across the board.

The October 24th conference brought together more than 800 students, faculty and workers from K-12, CSUs, UCs, and Community Colleges, as well as various individuals from labor unions and other organizations. The high attendance of the conference demonstrated the willingness of the participants to fight for what they considered theirs, their right to access education. Many present voiced their concern about how the increased fees and budget cuts would put higher education out of the reach of most working class students. Unfortunately, no clear strategy or program was developed from this conference, however, it was agreed that March 4th would be a day of strikes and other actions at all levels of education all across California.

There followed significant demonstrations on the 17th, 18th, 19th of November. During those days, meetings were held in which the CSU system approved further budget cuts and a whopping 40,000 student enrollment cut; the UC Regents approved a 32% fee increase on top of the 10% increase enacted the year before. About 2,000 protesters from all over California descended on the UC Regents meeting at UC Los Angeles on November 18th. Smaller actions were carried out at UC San Diego, UC Davis, UC Irvine, Fresno State, and others. In addition, there were several building occupations in November, such as Kerr Hall at UC Santa Cruz, the Business Administration Building at San Francisco State, Campbell Hall at UCLA, and Wheeler Hall at UC Berkeley.

The Response from the State

A sit in occupation was staged at Wheeler Hall in UC Berkeley on November 20. Some 40 students placed themselves in the building the night before and had reinforced the entrances. Hundreds of supporters had come to show solidarity with the occupation. Eventually riot police and SWAT teams were called in to evict the occupiers, by 5 pm that day, police had broken through the entrances and it was reported that 43 arrests were made.

Other occupations fared similarly; 52 were arrested at UC Davis, 16 at the UC Regents meeting at UCLA, 33 at SFSU, and one arrest each at UCSC and UC Irvine. Repercussions on the arrests range from brief period of detention to more serious charges such as arson. Some of the students arrested have been injured.

Then, on January 6th, 2010, Gov. Arnold Schwarzenegger endorsed a constitutional amendment to cap prison spending at 7% of the general fund, and ensuring higher education spending would receive at least 10%. Schwarzenegger has pledged to stop any further cuts to K-12 and the universities, yet further cuts were not ruled out for California’s community college system, the largest in the nation. Further fee increases are also not off the table. In addition, many other vital social services remain on the chopping block, which will negatively affect the poorest Californians.

Some activists have denounced actions such as protests and walk outs as futile, but the statement from the governor proves the validity of such actions, if they are well coordinated and have broad support. As quoted in the New York Times, the governor’s chief of staff, Susan Kennedy, “Those protests on the UC campuses were the tipping point.” This clearly demonstrates the effectiveness of the education protests, despite their limited scope, and shows that the way forward is to build even larger and better organized demonstrations. If we were able to get the state to partially back down through protests, imagine what we could win with an all-out strike?

School occupations are a tactic, not principle. Every action taken must be weighed carefully and must form part of an overall strategy. We must make careful considerations before engaging in such actions.Isolated groups on the fringes carrying out occupations with out any clear demands, program or goals can only lead to further repression just not only against the occupiers but the movement in general.

Occupations must be well organized with mass support and the participation of students, teachers, other university workers and the broader community. They should be agreed upon democratically, not initiated at the whim of small groups. Occupations for the sake of an occupation can actually be counter-productive and can serve to alienate the movement from the rest of the students.

The plight of education and poor living conditions of most people in our state are the product of the current crisis caused by the capitalists, which workers have to pay in the form of cuts to public services, lack of jobs, and deteriorating living conditions; this is a reflection of the exploitative nature of capitalism. This situation is reflected in the inequality between rich and poor, and the privileged access to education for the rich and the denial of the right to education to working people through economic and selective constraints.

Schools and universities have a top-down structure, where decisions are the responsibility of one person or a select group of people who depend on and are loyal to the system. This form of management guarantees that ideological and political control of the educational process remains in the hands of the defenders of the system, and does not allow for the active participation of the students, teachers, and workers in the political, administrative and academic decision-making of schools, universities, colleges and other public educational institutions.

This prevents the academic, scientific and democratic development of education, and inhibits the social character of public education. We disagree fundamentally with the current state of education in our state. Despite being supported financially by workers and students, we are not benefiting from the system. It is only serving to perpetuate the differences between the majority of society and a rich minority.

That’s why we, the students and workers grouped in the Workers International League and the International Marxist Tendency fight for free, quality public education, without restricting the right or freedom to choose and study the profession one wants. We are for an education the contents and orientation of which are determined by their direct participants: students, teachers and other education workers. We are for the creation of truly democratic and participatory representative bodies with broad community involvement within and outside the formal institutions. We strive for a scientific and secular education linked to social reality. An education that has its foundation in practice and in scientific and academic development. An education that meets the needs of social development and not the interests of Capital.

Capitalism has no interest is spending the resources necessary to produce more doctors, nurses, artists, astrophysicists, historians, linguists, etc. when there are no jobs for them. And yet, all of these things and more are very useful for humanity as a whole. This clearly shows how the narrow limits of the Capitalist system constrains the further development of individuals and society as a whole.

As students we have shown that we are ready to fight. To meet our objectives we propose to replace individual, dispersed actions with a collective unified force united by one program for all students in the state, ending the isolation of our struggles. We seek to build a broad, democratic, dynamic and permanent organization of the student movement. An organization that brings together students in K-12, UC and CSU universities and has strong and direct links to the working class and its trade unions. Our organization must be independent politically, economically and ideologically from the state, capital and the educational authorities. Contact us for more information on how you can get involved in the planning for March 4th and the struggle for free, quality public education for all.