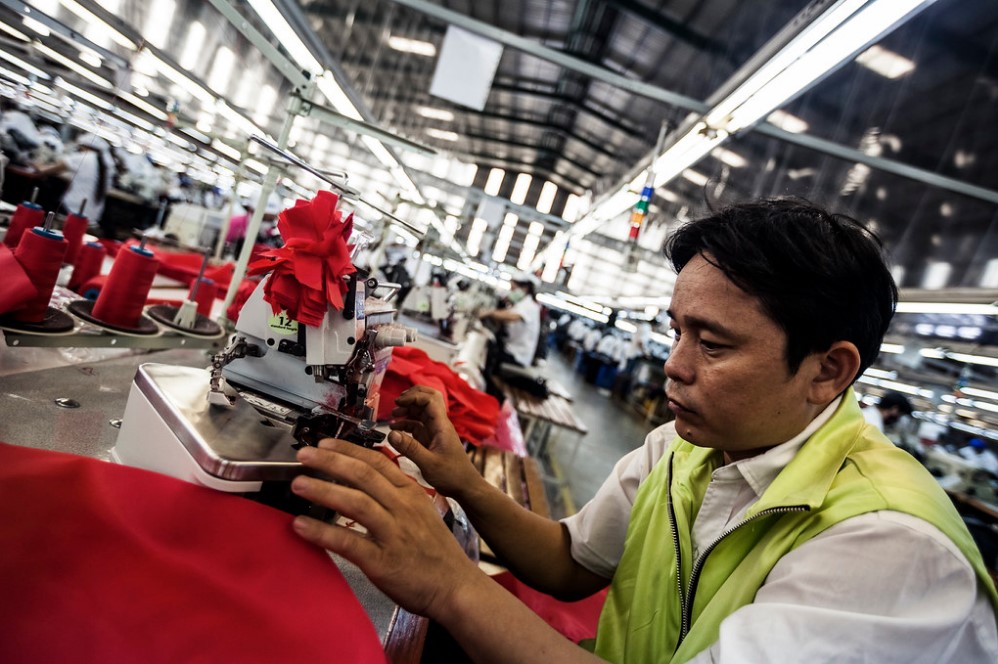 A wave of class struggle, rising all over the world, is approaching Vietnam. Under increasing financial pressure, sections of the Vietnamese working class have engaged in furious wildcat struggles. The rising tension is also reflected in the actions of the ruling Communist Party of Vietnam (VCP), which is now led by its most powerful leader in decades. While making a show of proactively addressing corruption in Vietnamese society in an effort to appease the masses, it has simultaneously increased repression.

2022 has seen a wave of strikes in Vietnam, as workers fight to regain what they have lost during the COVID-19 crisis. In January, there was a strike of between 14,000 and 16,000 workers at Pho Chen shoe factories in Dong Nai, Southern Vietnam. This Taiwanese-owned enterprise is the largest supplier for Nike and Adidas. The workers launched the strike to fight against a reduction of their holiday bonuses over Tet (the Vietnamese Lunar New Year).

In the following month, Viet Glory, a footwear manufacturer in Nghe An province, agreed to a 6 percent increase in basic pay after 5,000 workers went on strike from 7-14 February over 11 demands. On 15 February, 500 workers at a goods inspection department of a factory in Central Vietnam went on strike and won a 5 percent pay increase and more time off for senior workers. Vietnam Express, a VCP state mouthpiece, reported that there were 30 strikes as of March 2022.

For two years amidst the COVID-19 pandemic, Vietnamese workers accepted salary deductions and freezes, while not returning home for Tet holidays. Some workers lost hours and others faced increased overtime. Now workers are moving to gain back rights lost during the pandemic.

The Vietnamese working class faces exceptional obstacles to their struggle. All strikes and demonstrations are illegal as the VCP refuses to pass a Law of Demonstration, which for the past decade has specified who can protest and for what reason. As such, all strikes are subject to unrestrained police aggression, at a time when police brutality is already commonplace. Workers not only have no democratic rights at all, but all unions are banned except for those approved by the government and under the control of the state-run Vietnamese General Confederation of Labour (VGCL).

Class struggle on the horizon

This strike wave marks a definite development in Vietnam’s class struggle. As an economy that depends on exports, Vietnam is far from immune to the crisis in the world economy, and the working class there is bearing the brunt of all of the effects. Some have projected Vietnam’s economy to recover well from the pandemic, with 6 percent growth in 2022, and 7.2 percent in 2023, far above the 2.6 percent in 2021. However, this optimistic forecast is mired by inflation and substantial bad debts held in the economy.

Eva Dabla-Norris, Mission Chief of Vietnam and Division Chief of the IMF’s Asia & Pacific development division, warns “that the near-term outlook was fraught with significant risks”, given the war in Ukraine, increased geopolitical tension, slow growth in Vietnam’s largest trading partner, China, increased protectionism, skyrocketing real estate and stock prices. These all threaten to slow down recovery and increase inflation as the price of goods and raw material increase (Vietnam does have a lot of raw materials). With 43 percent of the GDP coming from private companies, the VCP will have less direct control over the economy and less capital available to intervene in the economy directly.

Nevertheless, the so-called Communist Party continues to push for deregulating the economy. At the 2021 National Congress, they approved a five-year plan where half of the economy would be privatised by 2025, the amount of domestic capital doubled by the same year. However, increasingly opening the country to the world market will also open it up to the worsening international capitalist crisis. Inflation for the moment is at 3.9 percent, in line with the State Bank’s target (4 percent), but this may well be a calm before the storm. Sooner or later the effects of inflation, supply chain chaos and other problems in the world economy will have a larger impact on Vietnam, which will then inflame the class contradictions in society.

Ruling class prepares for struggles from below

The Vietnamese Communist Party (VCP) bases its legitimacy on the strength of the economy. As various countries are forced to raise interest rates to combat inflation, thereby slowing the economy, the VCP has an increasingly difficult task in maintaining economic stability. Similarly, Vietnam's population is aging, threatening growth as a smaller working population is forced to support a large retired financially insecure population’s needs, placing more pressure on social services and increased financial pressure on workers to support their retired parents. With an economic crisis in Vietnam, the VCP would be forced to lean more and more upon repression as it could no longer point to economic success to build illusions in its leadership. The uptick in repression since 2016 has been mirrored by an increased presence of bureaucrats that represent the police into the VCP’s politburo, its highest political body. 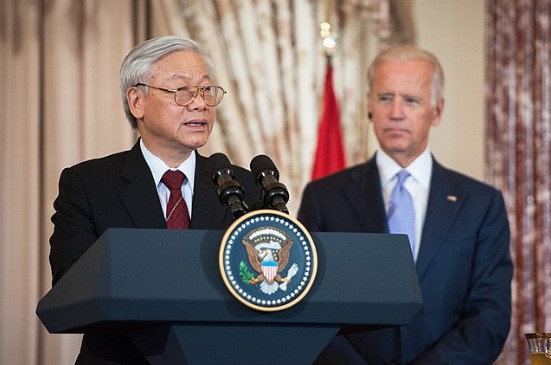 General Secretary Trong has styled himself as a savior of the party in a phenomenon similar to Xi Jingping in China / Image: U.S. Department of State from United States

During the National Congress during 2021, Nguyễn Phú Trọng, a self-proclaimed savior of the party, retained control of the party by winning a third term as General Secretary, the most powerful position in the country. The General Secretary controls party administration and resolutions from both the politburo and the Central Committee. Trong came to power in 2011, promising to end ‘backsliding and corruption”, as they would “lose the party and political system”. His predecessor, Nguyen tan Dung, was notorious for the corruption of his cronies and friends. He embraced globalisation and opposed party meddling in government business. At the 12th congress, Trong manoeuvred to oust Dung, with the party largely rallied behind him. He came to power with a powerful mandate to ‘fight corruption’, curb dissenting opinions, and chastise the party leaders for their extravagant lifestyles by punishing ideologically corrupt party figures. He sought to represent the triumph of the party and its members over technocrats and civil servants in determining the course of the country.

Vietnamese politics is intentionally opaque. However, the composition of the party’s highest body, the 19-person Politburo, represents the balance of factional forces that reflect various interests of the ruling class. The Politburo is the main decision-making body of both the state and the party. The leadership traditionally goes to great lengths to balance these forces as the country’s political ‘stability’ is a source of pride to the masses. Meanwhile a secretive, cutthroat, no-holds barred battle is constantly being waged between various factions behind the scenes until consensus is reached. Unlike past Politburos, 2021 saw more representatives from state sectors (as opposed to the private sector), more police presence and more places for party loyalists as opposed to technocrats. Police repression has been increasing since Trong’s first term, with the number of political prisoners doubling to 256. Suppression of use of the internet has also picked up, coupled with the already strict control over domestic media.

Along with Vietnam’s steady economic growth, Trong’s ‘burning furnace’ anti-corruption campaign, which has prosecuted 814 people from 2012 to 2021, sought to rehabilitate the party’s image for everyday people. However, corruption is a permanent feature of Vietnamese society, as with all capitalist society. It is seen by party officials as a glue that holds parties together, by cementing alliances and motivating ambitious young officers. Trong’s anti-corruption drive has attacked only his enemies’ corruption as a way to clear out rivals and to be seen to be attacking the worst excesses of the party. The threat of expulsion acts to bind the party members even closer together, which will keep it united in the face of impending class struggle.

Despite the manoeuvres of the ruling class, the Vietnamese working class is already suffering from the crisis of capitalism and will be forced into class struggle. They will meet with furious repression from the ruling class, and will need to forge their own bodies of struggle, with independent demonstrations, organisations and trade unions. In this battle, the Vietnamese workers will reclaim the marvellous tradition of class struggle from the past generations.

They once defeated the mightiest imperialist force on the planet: the United States. The Vietnamese proletariat of today need to aim their sights at the new capitalist ruling class that the VCP helped restore in the country. In order to win, they will need a genuine Marxist leadership worthy of their revolutionary traditions.