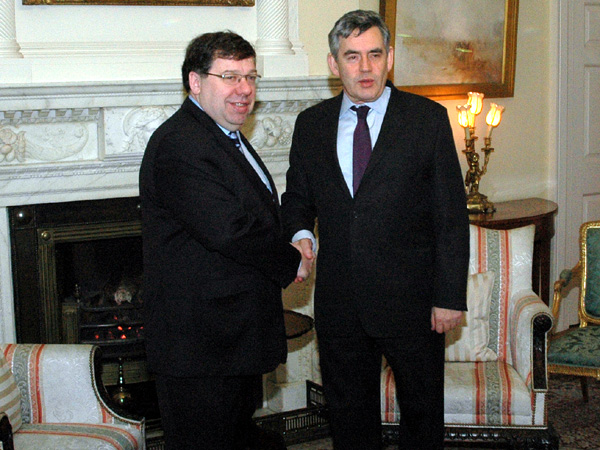 Long discussions into the small hours, shuttle diplomacy and the combined weight of Gordon Brown and Brian Cowen and still the deadlock continues over the devolution of policing and justice in the north. The process is meant to have been agreed years ago, but the deep contradictions in the north mean that every issue and every syllable has to be fought over. The “peace process”, far from solving the problems of the working class has enshrined sectarian division and entombed the leadership of Sinn Féin and the DUP in Stormont, presiding over the minutiae of what is more or less an overblown County Council.

Doubtless the intention of British and American Imperialism was to “normalise” politics in the north, but any faint hope that this would elevate the role of the SDLP and the UUP has been dashed because of the underlying contradictions in the situation. It’s no surprise that the issue of policing and the Parades Commission have become such stumbling blocks. The SF leaders are under pressure to make some progress towards setting a date for the devolution of police arrangements and the DUP are very conscious of the political divisions within unionism which have lead to the development of Traditional Unionist Voice and the closer links between the Ulster Unionists and the British Tories. They can’t afford to appear soft on the question of the parades and must appear as intransigent as possible over the PSNI question also.

While the tensions have become very apparent, the dialectic of the situation means that both SF and the DUP have been pushed into a position where they are in the centre of the whirlwind, they have a lot riding on the existing situation. They aren’t in the same position that they were in a few years ago where they were in the minority competing with the SDLP and the Official Unionists, they have succeeded in becoming the dominant parties and now face each other directly, but at what cost – to their standing.

What is the alternative? A breakdown of the Executive and the Assembly would mean that the SF strategy would have failed. That would create big divisions within SF over the way forward and at the same time would place huge pressures on the DUP leadership. It’s unlikely that either side would be ready to easily abandon Stormont, particularly when there is a growing polarisation in the north and growing political divisions on both side. The underlying contradictions mean that the DUP and SF are trapped in a cul-de-sac. For that reason, it’s likely that some diplomatic compromise will be arrived at. At the time of writing “round table discussions” are in progress.

The economic situation in the north is likely to change for the worse in the next period. Up to a point the fact that 63% of the jobs in the north are dependent on the state has meant that the effects of the slump were muted, at first. The cross border shopping expeditions have helped to buoy up the economy also. But the flip side of this is that the £370m of cuts that Sammy Wilson described recently will have a significant impact on the public sector in the north. The huge movement against wage cuts south of the border will have an affect as well. A movement of the working class in the north would demonstrate in practice that neither SF nor the DUP have any clear answers for working people. Likewise, the armed campaigns of the dissident republicans are a blind alley.

The Good Friday agreement was also under pinned by the capitalist boom. Despite the fact that this was largely based on speculation, credit, and often two parents in a family working longer hours it bought relative social peace for a period. It’s clear that these foundations will begin to fracture with the real onset of the economic crisis.

The class issues in the north, unemployment, low wages, housing and health remain. In fact they will only get worse over the next few years. There is a huge political vacuum in the north. This is most apparent in respect to working class political representation. The trade unions are potentially the most powerful organisations in society, especially were they to take the step of establishing a genuine worker’s party to fight for the interests of the working class as a whole. The best trade union activists and the youth will provide the basis for a Marxist tendency with the perspective of uniting the working class in struggle against capitalism and imperialism and for a socialist future.