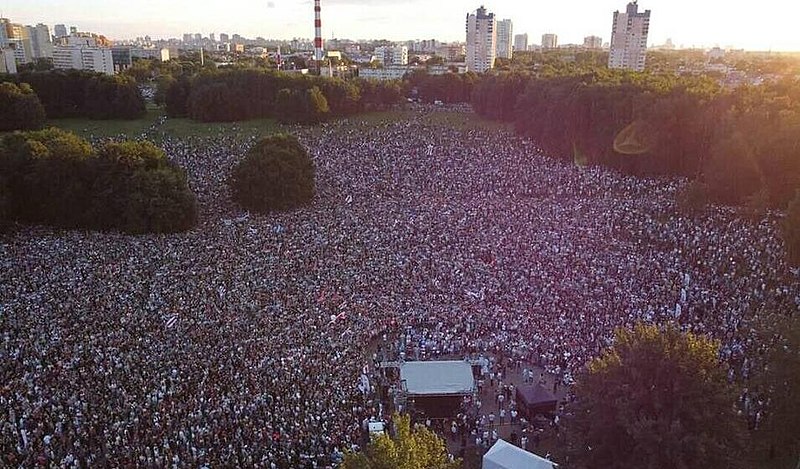 The following is a statement about the situation unfolding in Belarus. For a general political strike! Down with the Lukashenko regime! For socialism and genuine democracy!

As Marxists, we understand that the political crisis that is now unfolding in Belarus is not caused by an accidental coincidence of circumstances or the intrigues of certain foreign states. It is a consequence of the socio-economic crisis that the country has faced in recent years. For two decades, starting in the mid-90s, when Lukashenko stopped the privatisation process and retained, in general, state property and elements of indicative planning in key sectors of the economy, Belarus remained the only island of economic stability in the former USSR. Unfortunately, as the entire experience of 20th century history shows, state property itself, in a free market, that is, without a directive planned economy, is not capable of developing productive forces, except through super-exploitation and suppression of the working class.

It is precisely with this that the attack on the rights of the working class and the self-employed (often the most oppressed) workers, which we saw in the last years of Lukashenko's rule, is connected. The Bonapartist regime is increasingly in contradiction with that part of the bureaucracy and the national bourgeoisie that is closely aligned with it, which directly advocates privatisation and full integration into the world imperialist system. These forces do not need him personally and his camarilla, and today they have set a course for overthrowing his regime.

On the other hand, the policy of austerity and attacks on the rights of the working class and its organisations deprived Lukashenko of the (albeit passive) support from the majority of workers that he had before. The attack on the interests of workers has found its concrete expression in such phenomena as the policy of privatisation, raising the retirement age, the abolition of social benefits, the current contractual system of employment, etc. In these conditions, the fall of Lukashenko's Bonapartist regime is only a matter of time.

However, his defeat does not automatically mean the victory of the supporters of the free market and total privatisation. The working class of Belarus has shown in recent days and hours its strength and ability to fight for their rights. All that is lacking is political leadership.

As we know, the communist movement in Belarus is split based on loyalty to Lukashenko and his camarilla, rather than on ideological principles. Both sides of the confrontation – the CPB and “Fair World” – were mired in the realpolitik swamp of lesser evilism and, thus, abandoned the prospect of a social revolution. On the contrary, we believe that today's events are only the beginning of a revolutionary process that, at a certain moment, will bring the Belarusian proletariat into the arena of history under the leadership of a truly Marxist revolutionary party. As soon as this happens, the proletarian revolution will immediately and inevitably embrace Russia, Ukraine, Lithuania, Poland, and then other countries as well. The development of a revolutionary situation is inevitable and now, as never before, there is a question about the subjective factor: the genuine communist party that can lead the working class to the socialist revolution.

We are aware that such a party cannot be built on the basis of the leftist organisations existing today in Belarus, with their current programmatic and political limitations. However, on the basis of the ideas of genuine Marxism, those ideas that the International Marxist Tendency has been defending for many years, the creation of such an organisation is more than possible. If such an organisation is created, then, with the right tactics it will conquer the masses and change the fate not only of Belarus, but also of all mankind!

What’s going on and what’s next for the masses?

Lukashenko's Bonapartist regime has entered a period of political crisis, which will sooner or later end with his overthrow. Any possibility of a peaceful electoral transition was blocked by blatant falsifications and violent actions by the regime's security apparatus on the night of the counting of votes from 9-10 August, as well as by continuing police violence provoking the possibility of further escalation of the situation.

Belarusians are protesting the election of Alexander Lukashenko, who has been president of Belarus since 1994 and has been called "Europe's last dictator."

The crisis of the regime was caused not only by the long-term stifling of elementary democratic freedoms (including the freedom of the trade union and political organisation of workers), but also mainly by the decline in the population’s standard of living, and primarily that of waged workers, in recent years. The contract system, cutting benefits, the law against “parasites” and other attacks by the regime are a reflection of the crisis of world capitalism at a national level. Those who try to see Belarus as a kind of continuation of the Soviet planned economy make a deep mistake: the anti-social policy of privatisation of enterprises and deregulation of prices has long been pursued by the current regime.

At the moment, the masses are putting on the agenda the task of a political revolution, the essence of which is the transition to a regime of bourgeois democracy.

We fully support the desire of the masses to fully establish democratic freedoms, and in particular to create the most favorable atmosphere for the working class to defend its interests and rights, both economically and politically.

However, we warn the working people against illusions about their economic situation under the bourgeois-democratic regime, mainly because its establishment will not give any guarantees of stopping the austerity measures. In fact, in the current conditions, these bourgeois-democratic demands alone are already completely inadequate for a real solution to the question of democracy, especially if we take into account the political face of the main opposition leaders at the moment, who, having come to power, will only continue the anti-labour policy already implemented by the regime as a minimum in the economic field, but under a new cover. Moreover, these same leaders will readily capitulate to the regime, provided that an agreement is reached with it or there is sufficiently strong pressure from it. We must repeat the truth, self-evident to all true Marxists, that in our time there is only one consistently revolutionary class capable of fundamentally transforming society in every country: the proletariat.

The participation of the working class, and its core, industrial workers, in a political strike shows its importance and potential in the struggle for progressive social change. In addition to the struggle to expand democratic freedoms for themselves, the working class and its representatives must simultaneously raise their own “social agenda” directed both against the old anti-labour measures (the contract system, etc.), and against possible new ones (privatisation of state-owned enterprises, layoffs, etc. .).

But in order to truly protect their interests, the working class and its organisations, which have received a lease on life in the current conditions, will have to move from defensive to offensive policies, namely: to workers forming their own political bodies (councils) and using them to take control of politics, maintaining public order through the creation of a workers' militia and control over enterprises. This is the only possible long-term path. The alternative is disaster.

We condemn the reactionary statements of certain organisations (the Communist Party of the Russian Federation, the Communist Party of Belarus, etc.), advocating for the discredited regime of Lukashenko. We consider the likelihood of a repetition of the “Ukrainian scenario” unlikely due to the almost complete exclusion of the ultra-right from the current protests, the absence of significant national and linguistic contradictions, the popularity of anti-fascist ideas among the Belarusian people and the historical memory of the events of World War II and the German fascist occupation. One of the guarantees preventing a possible reactionary transformation of the protest (or at least the monopolisation of the protest by the liberals) is the broadest participation of the working class and its political representatives in it.

We consider it inadmissible for the capitalist governments of other countries to interfere in the country's affairs, and first of all by the imperialist powers and blocs such as Russia, the EU and the United States. Any initiatives directed against the self-determination of the Belarusian people are unambiguously reactionary. Those in Russia who today are trying to speak out “from the left” against this self-determination are actually replacing anti-fascism with an imperialism that is only embellished with “red” rhetoric, regardless of whether they do it consciously or unconsciously.

Having lost support among the masses, Lukashenko relies almost exclusively on the power of the bureaucratic apparatus. In such cases, it is quite possible that a split will open up in the ruling class and the state apparatus, under pressure from the masses, and attempts to conclude a compromise with the liberal elite of the opposition will be struck in order to forestall further participation of the masses in the political process. This should not be allowed. Political change along the lines of democracy and socialism must go as far as possible.

We call on those who are ready to take seriously the struggle for workers' democracy and international socialism to join our organisation, the International Marxist Tendency, by starting work on the construction of a full-fledged national section in Belarus.